We are stuck in the middle if you will, between two air masses… one loaded with moisture and the other with dry air.

The first image shows us all the cloud cover across Cuba and the Florida Straits.  There is an area of low pressure in the upper levels of the atmosphere right over Cuba, along with high pressure over the Atlantic Ocean. 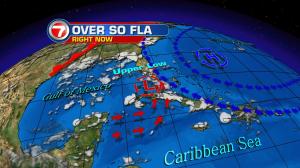 The Upper Low is dragging plenty of moisture from the Caribbean and causing plenty of rain over Cuba. We had some downpours on Friday by the Keys along with a few coastal showers over Miami-Dade and Broward.

Over the Atlantic, there is dry air trying to make its way across South Florida as well. The question is, “Who will win the battle?’ 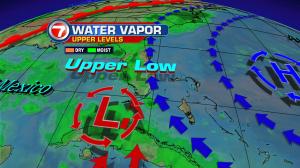 The models are suggesting, the Upper Low will move into the Eastern Gulf of Mexico over the weekend, with the high staying more or less put in the Atlantic. For us this means a few morning showers along the East Coast, with heavy downpours across the Everglades and SW Florida in the afternoons.

It will also be hot with the heat index hovering around 105° both Saturday and Sunday. Please drink plenty of water and do not leave pets or children in locked cars.