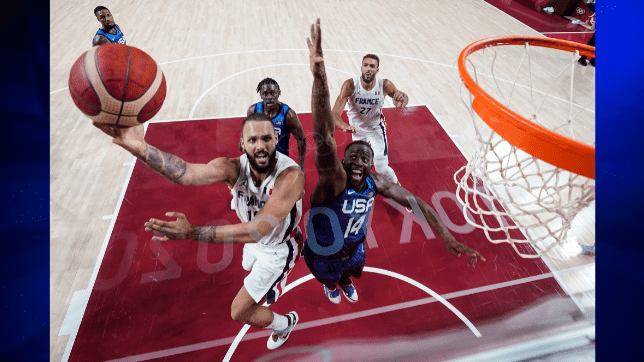 (CNN) — France beat the US men’s basketball team 83-76 at the Tokyo Olympics on Sunday, ending Team USA’s 25-game Olympic winning streak that dates back to 2004.

Team USA had an eight-point lead with four minutes left in the game, but the French team mounted a 16-2 run, highlighted by leading scorer Evan Fournier’s go-ahead 3-pointer with less than a minute left to seal the win. It was the opening game for both teams.

The loss is Team USA’s first since the team lost to Argentina in the 2004 Summer Games in Athens.

US head coach Gregg Popovich said he was “disappointed” in the loss, but not necessarily surprised.

“When you lose a game, you’re not surprised, you’re disappointed. I don’t understand the word surprise. That sort of disses the French team, so to speak, as if we were supposed to beat them by 30 or something,” Popovich said.

Team USA is the most successful nation in men’s Olympic basketball, having won all but four Olympic gold medals since basketball was introduced as a sport at the Games in 1936.

However, the Americans stumbled into the Tokyo Olympics, losing two of their exhibition games before Sunday’s loss, and have now lost three of their last four.

“We have to be more consistent. We had two nine-point leads and one 10-point lead, and then an eight-point lead at the end of the game, and we gave all of those up because of lack of consistent defense, too many errors,” Popovich said. “We had, on offense, dry possessions where we didn’t move and took ill-advised shots. So you understand it, you look at it, and you go to work and you try to get better.”

Despite pulling off the upset victory, France center Rudy Gobert said, “I mean it’s great, but, until we have what we want to have around our neck, it doesn’t really matter.” Gobert finished with 14 points and nine rebounds.

Fournier, who scored 28 points, expressed a similar sentiment, saying, “It is a big win for us obviously, but we have to move on and show people back home that these guys can be beaten.”

“With the right coach, the right mentality, the right work, you can compete against anyone, and it is not because we are a small country we should have any complexes. We are just as big as anyone you just have to believe,” Fournier said.

Both teams return to the court on Wednesday with the US scheduled to play Iran, and the French team facing off against Czech Republic.