‘U’ can go home again: Miami to visit FIU at Marlins Park 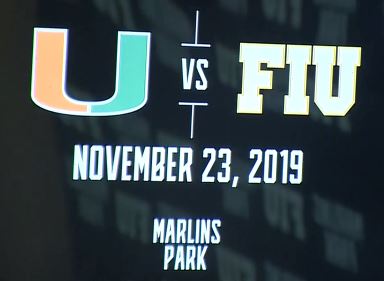 Marlins Park is built on the Hurricanes’ roots, atop the soil where the Orange Bowl sat for more than 70 years. The Orange Bowl was where Miami won three of its five national championships, where it beat rivals like Notre Dame and Florida and Florida State, where it lost to Boston College on the unforgettable “Hail Flutie” pass. It hosted Super Bowls and title fights, John F. Kennedy and Olympic soccer matches.

It also was where Miami and FIU infamously brawled in 2006.

And now, the Little Havana neighborhood gets to see the Hurricanes again. Miami (6-4) will be the visitors at Marlins Park when it faces FIU (5-5) on Saturday night, and even inside a baseball stadium the sense of nostalgia will be clear.

“Pretty exciting to see the Canes go back to the heart of Miami,” Hurricanes coach Manny Diaz said. “It’ll be a great occasion for our entire football team, certainly for our fan base. I know it will be for me personally.”

Instead, the last team to win a game at the Orange Bowl was FIU. The Panthers arranged to play North Texas there three weeks after the Miami-Virginia game, and snapped a 23-game losing streak by beating North Texas 38-19 in the stadium’s official college finale.

The Orange Bowl was torn down the following year. Marlins Park opened in 2012. It played host to three sparsely attended Miami Beach Bowls, but should be nearly filled for this.

“I don’t think I ever met a kid who didn’t say ‘that’s the most electric place I ever played,'” said FIU coach Butch Davis, the former Miami coach who spent years coaching at the Orange Bowl. “And it was. It was a mystical, electric atmosphere.”

The brawl happened on Oct. 14, 2006, when dozens of players sprinted from both sidelines onto the field for a melee that saw one swinging a helmet and another swinging a crutch. In all, 13 players were ejected, 31 were suspended and some never played college football again.

Miami and FIU honored an existing contract and played the following season, but it took 11 years for the sides to play again. From here, the series has an uncertain future with no more dates scheduled.

“It’s a shame,” Davis said. “I don’t know if it’s an every year game or whatever. But I think every four years, or twice every decade, give every class that comes through these schools a chance to participate in this game. I think it’d be great for college football and it definitely would be great for South Florida football.”

Here’s some of what to know going into Miami-FIU:

Diaz could be the fourth Miami coach to beat FIU. The Hurricanes have not had a coach face FIU twice — Larry Coker coached in 2006, Randy Shannon in 2007 and Mark Richt last year.