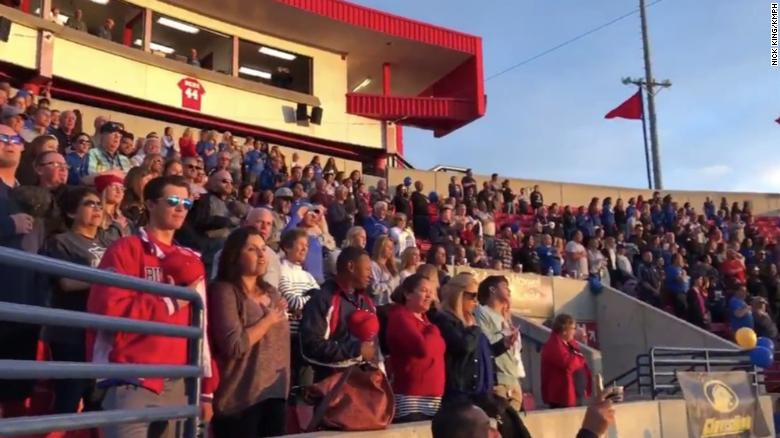 (CNN) — Fans at a California softball tournament weren’t happy when an official announced that the National Anthem would not be played before Friday’s game, so they took matters into their own hands and started singing.

The championship game between Clovis West High School and Buchanan High School was the second game of the day at Fresno State’s softball stadium. Organizers had played the anthem before the first game and didn’t plan to do it again, reporter Nick King with CNN affiliate KMPH said.

We came to CIF D1 section championship game between Clovis and Buchanan and the announcer said “there will be no national anthem.” After some booing, the whole stadium stood up and started singing it on their own.

Tiffany Marquez’s daughter plays softball with girls from both teams, so they were there to support her friends.

She said people were confused at first, because it didn’t make sense to not play the anthem — especially since it was Memorial Day weekend.

People booed the announcement and then started singing a cappella.

In an instant, the entire crowd was standing to attention and facing the flag. Many took off their hats or put their hands over their hearts.

“It gave me chills!” Marquez said.

She grabbed her phone out of her sweatshirt pocket so she could capture the moment.

“It was one of the neatest things I’ve ever experienced. I mean, there I was, standing in the middle of a true testament to unity and patriotism,” she said.

When the song was over, the fans cheered and the players got ready to play ball.

Tournament organizer Bob Kayajanian told the Fresno Bee that the national protocol is to only play the anthem before the first game of the day, but from now on, they will play it before every game.