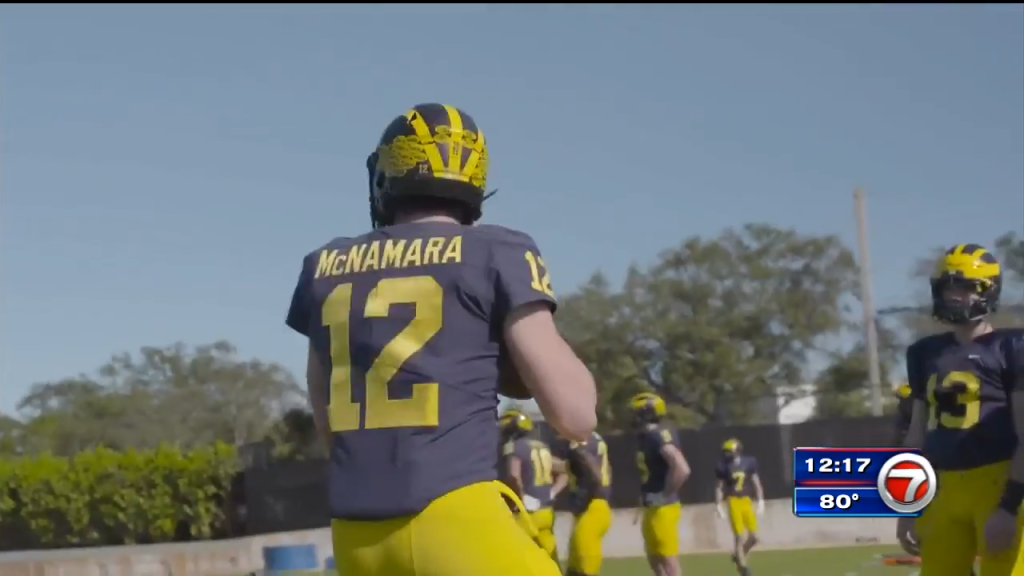 FORT LAUDERDALE, Fla. (AP) — Just about everything about this season has been a joyride for No. 2 Michigan, the first team to start unranked in the AP Top 25 and reach the College Football Playoff.

Reaching the playoff in 2021 was always the expectation for No. 3 Georgia, and it seemed like a foregone conclusion by November as the Bulldogs rampaged through their schedule.

Not even a resounding loss to Alabama in the Southeastern Conference title game could keep Georgia out. But instead of bounding into the Orange Bowl semifinal off huge victories like Michigan, the Bulldogs enter trying to re-establish the air of invincibility they carried much of the season.

“You lose some, and you just go on getting better,” Georgia All-America defensive tackle Jordan Davis said. “Obviously we’re not going to be the same team from last game to this game with Michigan, but we just have to keep moving forward and worry about ourselves and just get ready for the game.”

The Wolverines (12-1) and Bulldogs (12-1), two storied programs that haven’t played in more than half a century, took very different paths to their meeting Friday night at Hard Rock Stadium in Miami Gardens.

The winningest program in college football history, Michigan doesn’t fit the profile of an upstart, but few could have seen this breakthrough coming in year seven under Harbaugh.

Coming off a 2-4 record in 2020, the Wolverines used the doubters and critics of their coach as fuel. Center Andrew Vastardis wore a Michigan vs. Everybody T-shirt to his Zoom session with reporters earlier this week.

“I’d say that shirt really begins from fall camp and spring ball when we knew that a lot of people would be counting us out,” offensive tackle Andrew Stueber said. “I saw somewhere there was a .05% chance of making it to the College Football Playoff. A lot of people didn’t believe in us, and it kind of drove us this whole season.”

“Why not us?” has been another Michigan rallying cry.

After blowing a 16-point lead in the second half to Michigan State in their only loss on Halloween weekend, the Wolverines rallied late to win at Penn State, snapped an eight-game losing streak to Ohio State and beat Iowa to win the Big Ten for the first time since 2004.

“Definitely riding that into this game, and just ready to go out there and take advantage of every opportunity we get,” Vastardis said.

There is a different vibe around Georgia.

Nobody doubted the Bulldogs would be a playoff contender this season. Led by a defense stacked with blue-chip recruits and future NFL draft choices, they allowed less than a touchdown per game through a 12-0 start —- and then lost 41-27 to Alabama.

Georgia has not won a national title since 1980. While coaches and players don’t worry about that, those who support the program do, and losing to Alabama brought on the here-we-go-again feelings for Bulldogs fans.

Smart said the key to coming back from a loss is to keep it technical and analyze what went wrong with the players.

“Don’t be judgmental,” Smart said. “Don’t say things: ‘If you do this and if you do that, you’re going to get your butt beat.’”

The Wolverines, led by third-team All-America running back Hassan Haskins, average 223 yards rushing per game, 5.31 per carry and have scored 39 touchdowns on the ground. Georgia, led by Davis and All-America linebacker Nakobe Dean, has been an immovable object against the run, allowing 82 yards per game, 2.61 per attempt and just three rushing touchdowns.

“They’re definitely a physical team, and it’s a tremendous challenge for our front seven,” Davis said.

Michigan has used two quarterbacks all season, sprinkling in J.J. McCarthy to complement starter Cade McNamara. McCarthy’s athleticism is part of how coordinator Josh Gattis brings some diversity and creativity to the offense.

Georgia has had two starting quarterbacks this season, with JT Daniels beginning as QB1 before an injury opened the door for Stetson Bennett to claim the job. Bennett, a former walk-on, will start the Orange Bowl after a rough game against Alabama.

“We just (rallied) around him and let him know he’s not in this alone even though he was receiving a lot of bad talk about him,” receiver Kearis Jackson said.

Daniels’ status seems uncertain after he arrived in Georgia a day later than the rest of the team.

Heisman runner-up Aidan Hutchinson and outside linebacker David Ojabo combined for 25 sacks, a little more than 75% of Michigan’s total.

It will be on Georgia tackles Jamaree Salyer and Warren McClendon to keep two of the best pass rushers in the country away from whoever is playing quarterback for the Bulldogs.

“They present different matchups,” Salyer said. “Each of them are very good at different things, but very talented players, and I’m excited for the matchup.”