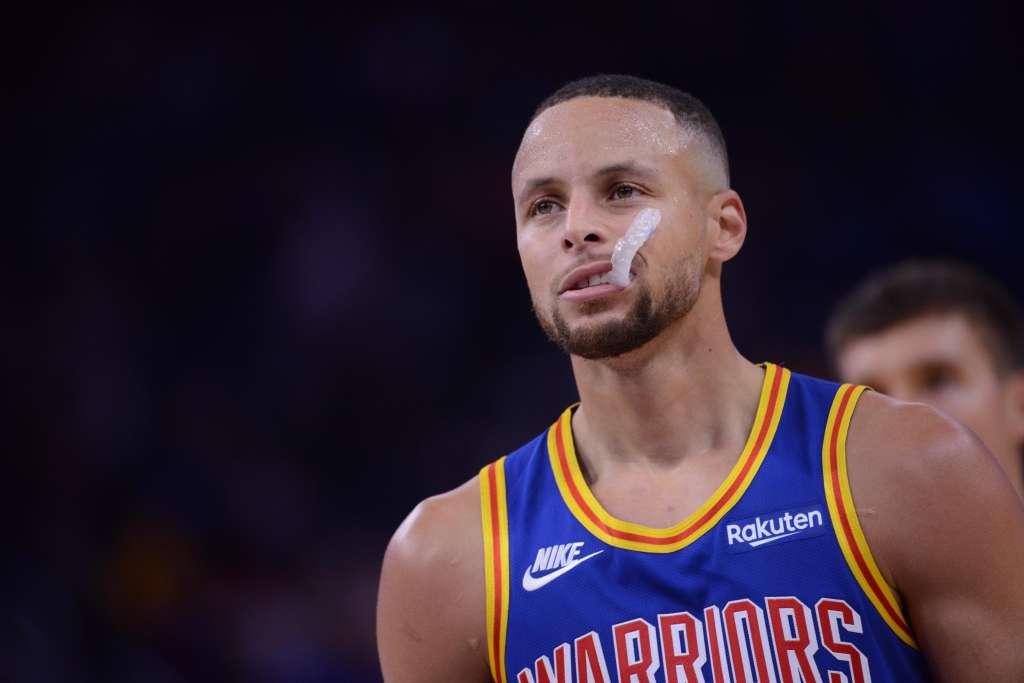 Stephen Curry (#30) of the Golden State Warriors looks on during the game against the Atlanta Hawks on Nov. 8, 2021 at Chase Center in San Francisco, California. Mandatory Credit: Noah Graham/NBAE/Getty Images

(CNN) — Steph Curry recorded 50 points and 10 assists for the first time in his career, overtaking Wilt Chamberlain as the oldest player in NBA history to do so, as the Golden State Warriors continued their blistering start to the season with a 127-113 victory over the Atlanta Hawks on Monday.

The 33-year-old stuffed the rest of his stat sheet with seven rebounds, three steals and a block to help pull Golden State out of a 15-point deficit in the second quarter and guide his team to a league best 9-1 record.

Curry had been unusually quiet by his own future Hall of Fame standards recently, recording 20 points or fewer in his previous four outings. However, his 50-point explosion — the 10th 50-point game of his career — brought on renewed chants of “MVP! MVP!” from fans inside Golden State’s Chase Center.

“That was just a stunning performance by Steph,” head coach Steve Kerr told reporters. “He was amazing.

“I want to say I’ve never seen anything like it but I’ve been watching it for seven years, so I have seen something like it and still it’s just incredible to watch.”

Curry hit nine of his 19 three point attempts against the Hawks as he became the first player to hit the 50-point mark this season.

The Warriors’ impressive start to the season becomes all the more concerning for rival teams when taking into consideration the impending return of Klay Thompson, Curry’s fellow ‘Splash Brother.’

Thompson, widely considered one of the best shooters in NBA history, missed the entirety of the last two seasons with an ACL tear and, most recently, an Achilles tear.

However, the three-time NBA champion is nearing a return to action after a 29-month layoff and has reportedly already started playing three-on-three in the Warriors’ practice sessions.

The Hawks, one of last year’s Eastern Conference finalists, have so far struggled to replicate last season’s form and sit 4-7 on the season after a fourth consecutive defeat.