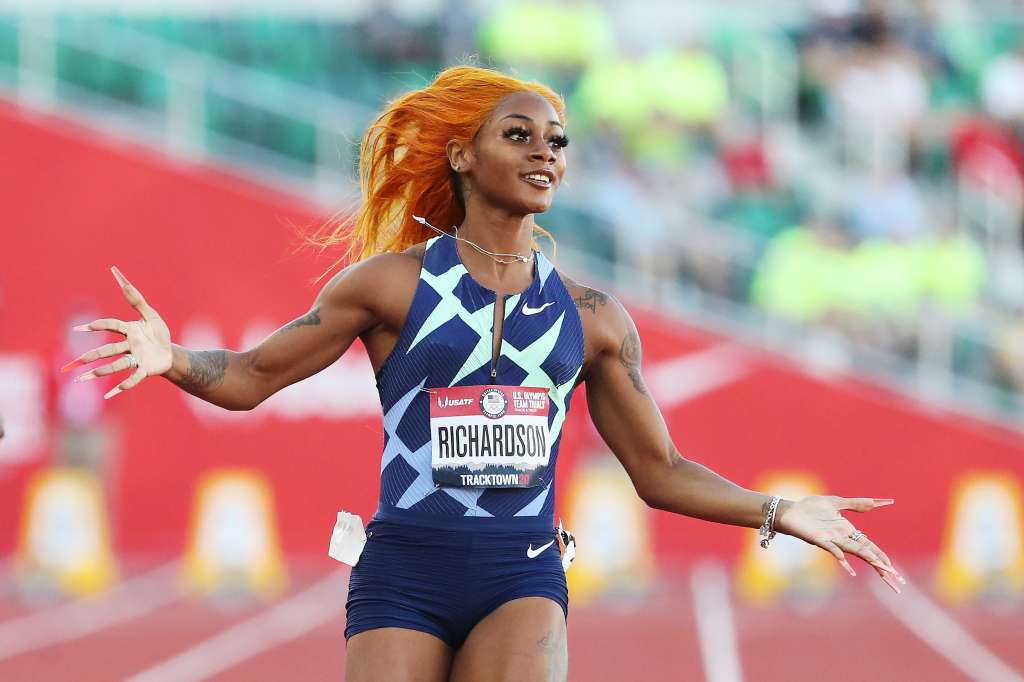 EUGENE, OREGON - JUNE 18: Sha'Carri Richardson reacts after competing in the first round of the Women's 100 Meter during day one of the 2020 U.S. Olympic Track & Field Team Trials at Hayward Field on June 18, 2021 in Eugene, Oregon. (Photo by Steph Chambers/Getty Images)

(CNN) — US track and field star Sha’Carri Richardson has been suspended for one month from the Olympic team after testing positive for THC, a chemical found in marijuana, the US Anti-Doping Agency (USADA) announced on Friday.

“The rules are clear, but this is heartbreaking on many levels; hopefully, her acceptance of responsibility and apology will be an important example to us all that we can successfully overcome our regrettable decisions, despite the costly consequences of this one to her,” said USADA CEO Travis T. Tygart in a press release.

Richardson appeared on NBC’s TODAY show on Friday morning and said: “I just want to take responsibility for my actions, I know what I did, I know what I’m supposed to do, I’m allowed not to do and I still made that decision. I’m not making an excuse or looking for any empathy in my case.”

Richardson had booked her spot at the Tokyo Olympics with a runaway victory in the women’s 100m at the US Olympic track and field trials in Eugene, Oregon last month. Due to the positive test, her Olympic trials results were automatically disqualified and she will not be allowed to participate in her signature 100m race at the Tokyo Olympics later this month.

Friday’s USADA statement reads: “Richardson’s competitive results obtained on June 19, 2021, including her Olympic qualifying results at the Team Trials, have been disqualified, and she forfeits any medals, points, and prizes. Beyond the one-month sanction, athlete eligibility for the Tokyo Games is determined by the USOPC and/or USA Track & Field eligibility rules.”

Richardson cited finding out from a reporter that her biological mother had passed away as part of the reason she consumed marijuana, saying: “I was just thinking it would be a normal interview and then on the interview to hear that information come from a complete stranger, it was definitely triggering, it was nerve shocking because it’s like who are you to tell me that?

“From there just blinded by emotions, blinded by bad news, blinded by just hiding hurt, honestly for the fact that I can’t hide myself, so at least in some type of way, I was trying to hide my pain.”

The World Anti-Doping Agency (WADA) and the USADA label cannabis as a banned substance as it “poses a health risk to athletes, has the potential to enhance performance and violates the spirit of sport.”

“Everything I do comes from me naturally. No steroid(s). No anything. This incident was about marijuana. After my sanctions are up, I’ll be back and able to compete and every single time I step on the track I’ll be ready to compete for whatever anti-doping agency to come and get what it is that they need,” Richardson concluded.

“Sha’Carri Richardson’s situation is incredibly unfortunate and devastating for everyone involved,” USA Track and Field said in a statement. “Athlete health and well-being continue to be one of USATF’s most critical priorities and we will work with Sha’Carri to ensure she has ample resources to overcome any mental health challenges now and in the future.”