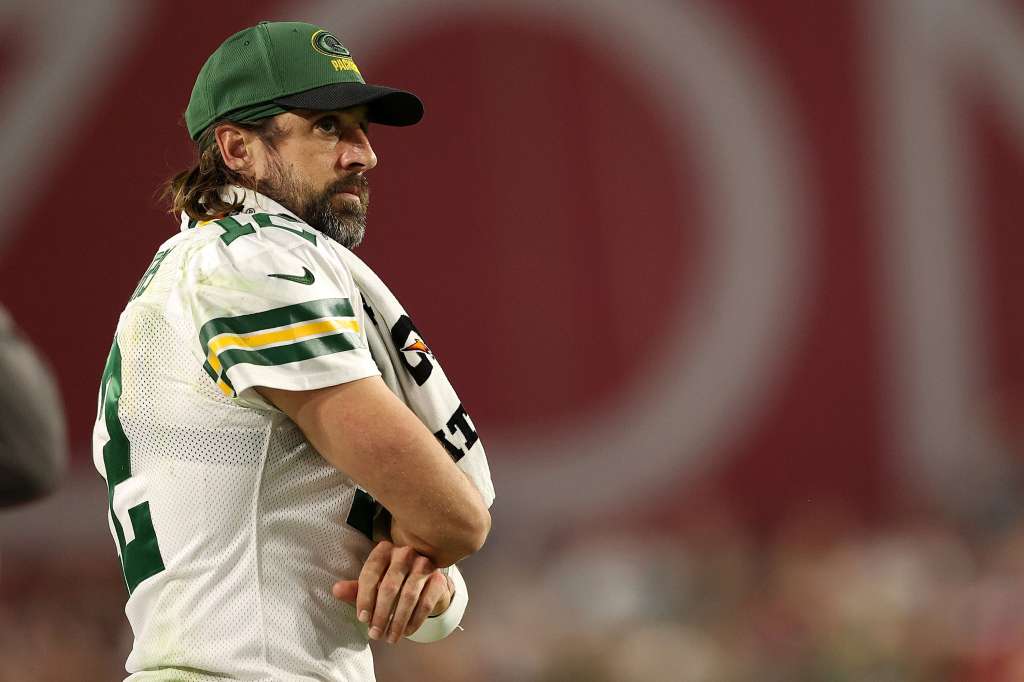 GLENDALE, ARIZONA - OCTOBER 28: Aaron Rodgers #12 of the Green Bay Packers watches action from the sideline during the second half of a game against the Arizona Cardinals at State Farm Stadium on October 28, 2021 in Glendale, Arizona. (Photo by Christian Petersen/Getty Images)

(CNN) — If only scientists had the influence of a popular professional football quarterback.

Scientists have worked hard to develop vaccinegs to end the Covid-19 pandemic, building on decades of vaccine knowledge and developments. And some of them, like Dr. Anthony Fauci, director of the National Institute of Allergy and Infectious Diseases, speak to the public almost daily about the safety and efficacy of the available vaccines.

And then there are people like Green Bay Packers quarterback Aaron Rodgers, who recently tested positive for the virus and told a radio show host he is not vaccinated, after saying in August that he is “immunized.” He also repeated a number of misconceptions and misinformation about how to deal with an infection.

Rodgers is not just any football player. Last year he was named the National Football League’s most valuable player for the third time. He has hosted “Jeopardy,” and he has 4.5 million followers on Twitter.

“Any very public figure who first of all, is duplicitous, and then makes misstatements certainly is contrary to what we’re trying to achieve from a public health perspective,” said Dr. William Schaffner, professor of medicine at the Vanderbilt University School of Medicine. “And we would all of us who are in public health, I think I can speak for my colleagues across the country, think that this is very unfortunate.”

Rodgers spoke on the radio show again this week. He said he took “full responsibility” for “anybody who felt misled” by his comments, but Rodgers didn’t try to correct anything he said earlier.

That, CNN Chief Medical Correspondent Dr. Sanjay Gupta said, was “very irresponsible” because “he gives a lot of voice either intentionally or not to the anti-vaccine movement. At a time when we’re still in the middle of a pandemic, over 1,000 people are still dying of this disease” daily in the United States, Gupta said on CNN this week.

Rodgers repeated some of the most common misinformation about the vaccines and treatments that are circulating around the country, said CNN medical analyst Dr. Leana Wen, calling it a sort of “best hits” of all the bogus claims.

“What he’s saying is a synthesis of all the major myths and misinformation, and it’s as if we were writing a guide on combating misinformation,” Wen said.

“These are things that are common myths,” Wen said. “But when it’s repeated by someone with this level of celebrity and influence, it is very dangerous.”

Some even ponder whether the media are perpetuating Covid-19 and vaccine misinformation by continuing to write and talk about what Rodgers said.

“Part of the challenge, whether it’s Aaron Rodgers or somebody else, is that the comments on it and coverage of it further amplifies the message,” said Sandra Crouse Quinn, chair of the Department of Family Science at the University of Maryland.

Scientists and public health officials don’t have the capacity to reach millions of people, as Rodgers can, Quinn said.

“So it’s like an uneven fight in many ways,” she said, pointing out that Rodgers’ followers follow him because he is a great football player. “Would you go to a shoemaker to, I don’t know, get your tooth pulled, because you really like him and he’s a great shoemaker?”

A recent survey by the Kaiser Family Foundation illustrates the extent of the misinformation. Almost 80% of Americans surveyed said they had heard of at least one of the untruths about Covid that are circulating, and either believed it or are not sure whether it is true.

“Ultimately, this comes down to fear. Many people are scared. They’re scared because of what they’ve heard about the vaccine,” Wen said. “They don’t know what to believe. And if you have someone who is influential, like Aaron Rodgers, says things that are untrue, it might end up validating people’s decisions to remain unvaccinated.”

In Wisconsin, where the Packers are located, just 55.1% of the population has been fully vaccinated.

“It’s just disappointing as a Wisconsinite, as a Packers fan, and a doctor,” Dr. Allison Neitzel told CNN affiliate WTMJ-TV. “We are fighting this twin pandemic of coronavirus, but also this misinformation.”

“He’s in a position to really motivate the state of Wisconsin and the nation at large to get vaccinated. Instead of furthering this this divide, let’s open doors,” Neitzel said.

You asked, we’re answering: Your top questions about Covid-19 and vaccines

The fact that Rodgers misled people in August by saying he was “immunized” was one of the most striking things about his recent admission that he is unvaccinated, doctors say.

“Immunized has a very specific meaning,” Schaffner said. “It’s in the dictionary. It doesn’t mean some nonspecific protection.”

“I’m reminded of the late senator from New York, Daniel Patrick Moynihan, who famously at one point said everyone’s entitled to their own opinion but not to their own facts,” Schaffner said. “He said a series of things that were, purely from a scientific point of view, factually incorrect. I mean, this professor marks those answers wrong. Minus 10 on the exam.”

And some of the “treatments” Rodgers talked about could be harmful, Schaffner said.

Rodgers got one thing right when told the radio show host that “hate isn’t going to bring us out of this pandemic.”

But there is one thing that well could: vaccines, scientists say.