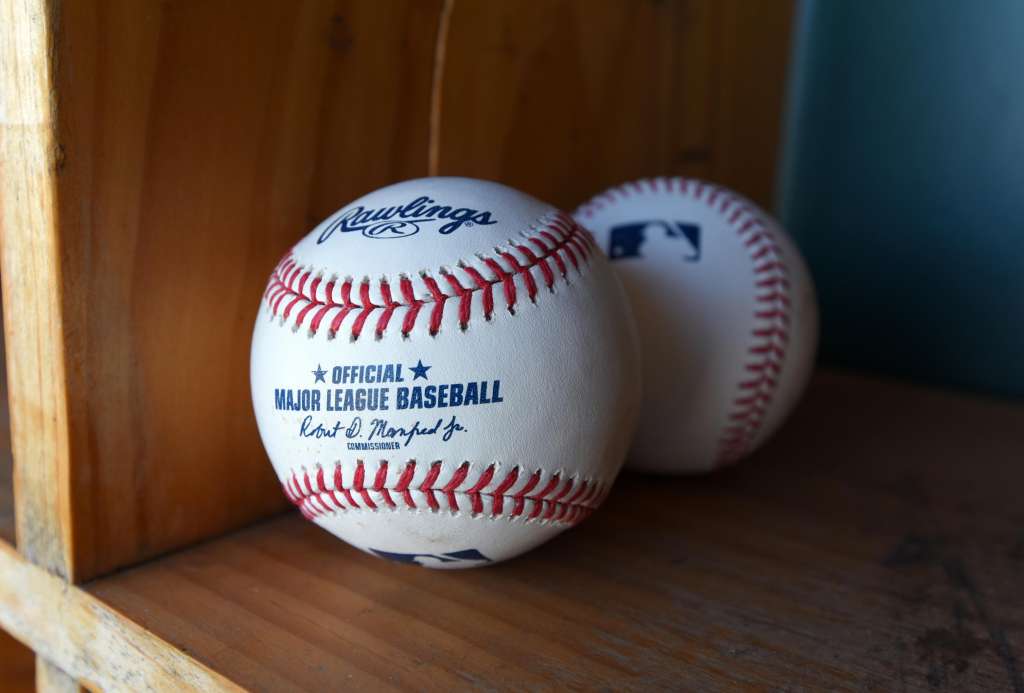 A detailed view of a pair of official Rawlings Major League Baseball baseballs with the imprinted signature of Robert D. Manfred Jr., the Commissioner of Major League Baseball, sitting in the dugout prior to the Spring Training game between the New York Yankees and the Detroit Tigers at Publix Field at Joker Marchant Stadium on March 1, 2020 in Lakeland, Florida. The Tigers defeated the Yankees 10-4. (Photo by Mark Cunningham/MLB Photos via Getty Images)

The news Wednesday came a day after the league announced the 2020 regular season will start in July, with the players’ association accepting health and safety protocols to guide the return to play. The US on Tuesday also saw the third-highest number of new Covid-19 cases reported in one day since the pandemic began.

A Detroit Tigers player and a staff member outside the baseball operations department each tested positive for Covid-19, general manager Al Avila told reporters Wednesday. The player, who tested positive in the last few days, was in Florida but not at the team’s spring training facility in Lakeland, Avila said, according to MLB.com.

“They’re going through the process of recovering as we speak, and that’s really all I can say about that at this point,” Avila said, per MLB.com. “It was just a few days ago, so they’re still in the recovery stages, and at some point, they’ll be tested again.”

The Seattle Mariners have had “more than one” player test positive for Covid-19, general manager Jerry Dipoto said Wednesday to reporters.

“A lot of that is obviously going to be protected information, but we’ve had more than one player in our organization test positive,” Dipoto said, according to MLB.com.

“We’re not yet sure, with testing coming this weekend, how much of that will affect our 40-man roster. But with the cases popping up, especially in some of the hot spots around the country, we have had a few players test positive,” he said.

“Right now they’re asymptomatic. They feel great. But we are aware that they’re positive, and obviously they’ll not be in the environment when we open up until we’ve determined whether, A) they’re part of the roster group, and B) they’re healthy enough to be a part of that.”

A player on the Boston Red Sox’s 40-man roster has tested positive for Covid-19, Chief Baseball Officer Chaim Bloom told reporters Wednesday. The player was exposed to the virus a couple weeks ago, Bloom said, according to CNN affiliate WCVB.

There are also positive Covid-19 cases stemming from testing last week at the Toronto Blue Jays facilities in Dunedin, Florida, a source with knowledge of the situation told CNN on Wednesday. The source did not specify the number of positive cases and did not say if any of the positive cases are players

On Friday, the Blue Jays had said in a statement that they had closed the club’s spring training facilities in Dunedin after a player experienced symptoms associated with Covid-19.

One player was symptomatic while the other two were asymptomatic, the reports say.

Several Rockies players have been taking live at-bats and working out at the team’s stadium, Coors Field, this month, according to the Denver Post.

The other players working out at the ballpark were tested for the virus and received negative test results, the Denver Post reports.

Colorado has not responded to CNN’s request for comment.