Panthers lose Barkov to injury, but stay unbeaten at home 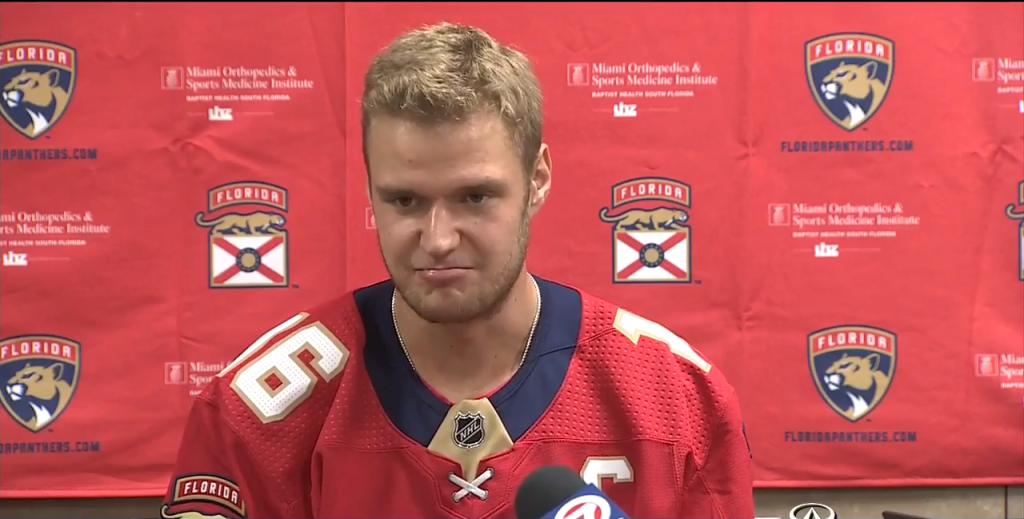 SUNRISE, Fla. (AP) — Sergei Bobrovsky stopped 27 shots and the Florida Panthers overcame the loss of center Aleksander Barkov to remain unbeaten at home with a 6-1 rout of the New York Islanders on Tuesday night.

Jonathan Huberdeau and Carter Verhaeghe each scored a goal, Ryan Lomberg recorded his first goal of the season and Patric Hornqvist had a goal and an assist. Aaron Ekblad and Frank Vatrano also scored goals for the Panthers.

Ilya Sorokin allowed four goals on 17 shots in the first period for the Islanders and was replaced before the second by Semyon Varlamov, who finished with 17 saves. Kyle Palmieri scored the goal for the Islanders, who ended a 13-game trip.

The Panthers, 8-0-0 at home, broke a four-game winless streak, but the victory may prove costly.

Barkov collided knee-on-knee with Islanders defenseman Scott Mayfield with 18:13 left in the second period. Barkov remained on the ice for several minutes before leaving the game, putting no weight on his left knee. He did not return to the game with what was officially called a lower-body injury.

Panthers interim coach Andrew Brunette says Barkov will be evaluated over the next couple of days, but didn’t give further updates.

“It’s a test again,” Brunette said. “We’ve had a lot of tests this year; this is another one. You hate to lose Barky. He means so much to this franchise. Hopefully he’s okay.”

Mayfield, who appeared to lean into the hit, was assessed a five-minute major and a game misconduct.

“There wasn’t a big window as Barkov came laterally between him (Mayfield) and another player,” Islanders coach Barry Trotz said. “He looked like he was trying to hit him shoulder to shoulder. I know Scott, there’s no intent there. It’s all in the interpretation.”

The Islanders went 5-8 on the season-opening trip.

“There’s a ton of belief in this room,” Palmieri said. “There’s no time to feel sorry for ourselves, we’re going to have to claw our way out of it.”

The Panthers kicked off their lead when Huberdeau fired the puck in from in front to open the scoring and Lomberg poked in a rebound top shelf to go ahead 2-0. Verhaeghe also put in a rebound for a 3-0 lead and Hornqvist’s odd-angle shot along the goal line bounced of the mask of Sorokin and in the net with 1:47 left in the first.

“We felt good on home ice,” Brunette said. “We wanted to dictate right from the start. We knew that was a desperate team coming to the end of a 13-game road trip. I thought we took control of the game and played with pace.”

“The first period was really good,” Verhaeghe said. “We were making plays and shooting pucks. We wanted to get off to a good start and we were able to do that.”

After 13 games that took them through four time zones and 12 cities — including Sunrise twice — the Islanders were packing up after the game for a new destination: home.

The team makes its debut at UBS Arena on Friday against Calgary. The new building needed a few extra weeks to be finished, so the NHL sent the Islanders on the road. The team was able to return to New York at various times this season, but only for practice.

The Isles will play 25 of their next 36 games at home, a stretch that runs through the start of the Olympic break in February.

NOTES: The Islanders aren’t back in Sunrise again during the regular season. The teams play on the Isles’ new home ice on April 19. … The only road trip in NHL history that was longer than the Islanders’ was a 14-game stretch by the Vancouver Canucks in 2010, when their building was unavailable for weeks because of changes that needed to be made for that year’s Olympics.