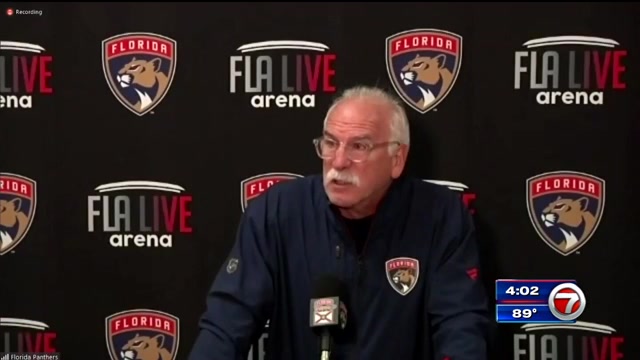 SUNRISE, FLA. (WSVN) - Florida Panthers head coach Joel Quenneville has met with the National Hockey League commissioner about his handling of sexual assault allegations stemming from his time as the head coach of the Chicago Blackhawks.

7Sports has learned the meeting is over, but NHL officials are not commenting on what transpired.

The meeting was said to have revolved around allegations that a player was sexually assaulted by an assistant coach during the Blackhawks’ Stanley Cup playoff run in 2010.

Canadian hockey player Kyle Beach, who played for the Blackhawks during that period, shared his account of the 2010 incident on the Canadian sports TV station TSN, Wednesday night.

Beach said he reported the incident to the team, and discussions were held in Quenneville’s office, but nothing was done.

“The Stanley Cup playoffs and trying to win a Stanley Cup was more important than sexual assault,” he said.

A report this week found the Blackhawks mishandled the allegations. The team was fined $2 million, and its general manager resigned.

Quenneville spent Wednesday night behind the bench as the Panthers skated to a record 7-0 start to their season. After the game, however, he was nowhere to be found.

“There’s no question that the events described in yesterday’s report are serious and severe,” said Panthers general manager Bill Zito.

“I won’t comment any further until the appropriate time that I meet with the commissioner,” said Quenneville.

Beach said he hopes that by coming forward, no one else is assaulted.

“Whether it’s in hockey, soccer, any sport, any business, any company, there needs to be a system in place that it gets dealt with,” he said.