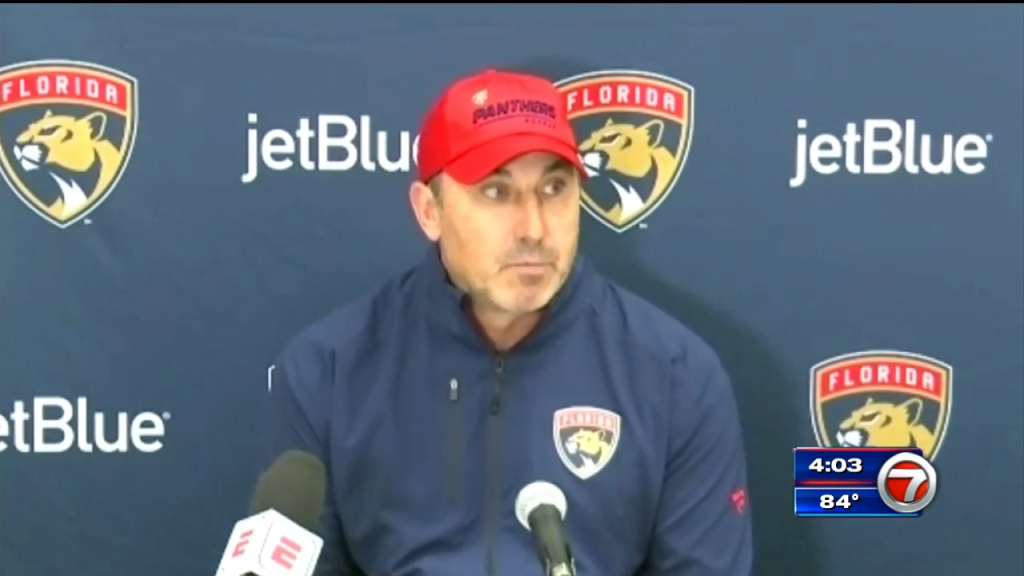 Andrew Brunette has a chance to be an NHL head coach now, taking over a Florida Panthers team that is off to the best start in franchise history.

It should be a happy time. It is not.

Brunette debuted as the replacement for Joel Quenneville as Florida’s coach on Friday, leading the Panthers to a 3-2 overtime win in Detroit as the team extended its perfect start to 8-0-0 — by far the best in team history.

“It’s been a tough 48 hours for us,” Panthers defenseman MacKenzie Weegar said.

A tough few days for hockey, too, for obvious reasons.

Before the game, Brunette made clear that the Panthers’ on-ice matters are dwarfed by the bigger issue of the sexual assaults reported by former Chicago Blackhawks player Kyle Beach in 2010 and subsequent cover-up that has engulfed the sport after details came out in recent days.

Quenneville resigned Thursday, two days after the second-winningest coach in NHL history was among those implicated for not swiftly responding to Beach’s allegations of being sexually assaulted by another coach during the 2010 Stanley Cup playoffs.

Quenneville was Chicago’s coach when Beach said he was assaulted by video coach Brad Aldrich. A report into what the Blackhawks did and didn’t do at the time — the inference was the team ignored Beach and prioritized its run to the Cup instead — was released this week, and Quenneville’s job was in immediate jeopardy when it came out.

Brunette was picked as the interim coach shortly after Quenneville’s decision to resign was revealed Thursday night.

“He’s a great guy and I’m sure he’s going to be a great coach for now,” Panthers forward Jonathan Huberdeau said. “It’s not easy for everybody, but we’re going to go through it as a team.”

The Panthers haven’t said if their intention is for Brunette to have the job for a few days, a few weeks or few months. Florida plays Saturday at Boston, then not again until a home game Thursday against Washington.

After one day, he’s 1-0-0. The coach has changed. The Panthers are trying to make sure everything else stays the same.

The report’s fallout was massive; Chicago general manager Stan Bowman resigned and Quenneville left his job with Florida. But Winnipeg general manager Kevin Chevyldayoff — who also worked for the Blackhawks at that time — escaped sanctioning after meeting with NHL Commissioner Gary Bettman on Friday.

Huberdeau said hockey should, and does, seem secondary given what Beach has endured.

“We all feel sorry for what happened, and that’s all that matters,” the Florida forward said.

Panthers defenseman Aaron Ekblad said he watched Beach’s interview with TSN after it aired Wednesday night and said it left him “extremely sad.” He was asked if, after watching it, his opinion of Quenneville had changed.

“I’m not sure about my feelings right now,” Ekblad said.

The 48-year-old Brunette spent four seasons playing for Quenneville. Three of those years were in Colorado and the last was in Chicago — the 2011-12 season, Brunette’s last as a player and one where he was a training camp teammate of Beach.

Brunette played a total of 16 seasons for six different franchises, six of those seasons coming in Minnesota. He went back to the Wild when his playing days were over for seven more years, holding several jobs during that stint including director of player personnel, assistant general manager and assistant coach.

Quenneville — a three-time Cup-winning coach, all with Chicago — and the Panthers came calling in 2019, offering Brunette a job as an assistant. He’s been in Florida since, perhaps hoping to one day be a head coach, never envisioning that chance would come like this.

“I’m just trying to process,” Brunette said. “It’s been a whirlwind. I wish I could give you a better answer. I can’t explain to you. I understand the bigger issue here right now is Kyle.”

Florida’s win over Detroit made the Panthers the fifth franchise and seventh team in NHL history to begin a season with eight consecutive victories. The others that have done it: the 1934-35 and 1993-94 Toronto Maple Leafs, the 1975-76 and 2006-07 Buffalo Sabres, the 2005-06 Nashville Predators and the 2015-16 Montreal Canadiens.

“It’s been a crazy few days with all the information and everything that’s happened,” Ekblad said. “We’re a team that’s a bit distraught right now.”

Distraught, yes. And they won again anyway. The Panthers are trying to move on, and Brunette said he believes hockey eventually will be better because Beach came forward.