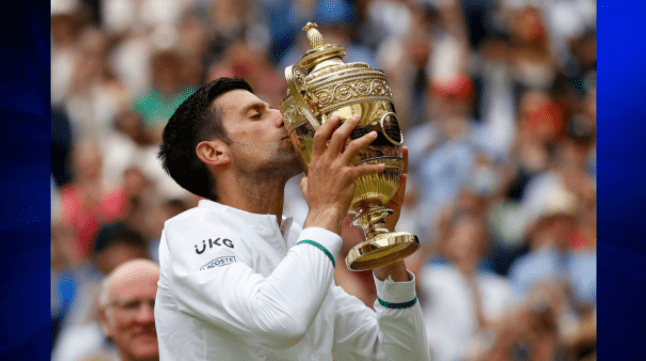 (CNN) — Novak Djokovic equaled the men’s record for most grand slam single’s titles after beating Matteo Berrettini in the Wimbledon final on Sunday.

The world No.1 joins Roger Federer and Rafael Nadal on 20 career grand slams, cementing himself as one of the greatest players in the history of the sport.

Having already won the Australian Open and French Open this year, he needs the Olympic gold medal and US Open title to become the first man to ever win a Golden Slam.

“That was more than a battle. I’d first like to extend my congratulations to Matteo, his family and his team for a fantastic tournament. It was a tough match today,” Djokovic said in his on-court interview. “From a 7-year-old boy in Serbia constructing a Wimbledon tennis trophy from improvised materials I found in my room to standing here today with my sixth Wimbledon. It’s incredible.”

Berrettini, playing in his first grand slam final, could have been forgiven for being nervous, but it was the veteran Djokovic who looked more shaky at the start.

The 34-year-old started the match with a double fault before surviving a break-point in his first service game.

Berrettini, bidding to become the first Italian winner of a Wimbledon singles title, looked to rely on his powerful serve and booming forehand to settle himself into the match but was broken by Djokovic in his second service game.

The Italian then began struggling for form, missing a couple of easy shots, but discovered his rhythm just in time, breaking back against Djokovic as he was serving for the set.

The mini-victory seemed to give Berrettini a boost and momentum swung in his favor as the crowd got behind the underdog.

The opening set went into a nail-biting tie-break which Berrettini sealed with an emphatic ace.

It was clear Djokovic needed to up his game, and that’s exactly what he did in the second set, breaking the Italian’s serve twice in his first two attempts.

Berrettini didn’t go away, though, once again breaking back when Djokovic was serving for the set, but the Serbian dug deep to level the match.

The third set was more like the final many had expected, with both men producing wonderful tennis much to the delight of the packed stands on Centre Court.

But after an early break, Djokovic once again held on to take a 2-1 lead in the final.

Berrettini continued to put pressure on Djokovic in the final set of the match but the great champion’s experience began to pay off. He dramatically reduced his unforced errors and, as has always been the case, he found a way to win the big points.

“For sure, Novak was better than me. He is a great champion. He’s writing the history of the sport so he deserves all the credit,” Berrettini said during his on-court interview. “I’m really happy with the final. Hopefully it won’t be my last one here or last one in general. It’s an unbelievable feeling.”

In his current form, it seems just a matter of time before Djokovic overtakes Federer and Nadal’s grand slam haul, but the Serbian paid tribute to the two legends of the men’s game.

“They are legends of our sport and they are the two most important players that I’ve ever faced in my career,” he said. “They are the reason I am where I am today. They helped me realize what I need to do to improve and get stronger.”

Djokovic will now head to Tokyo to compete at the Olympics before heading to the US Open.