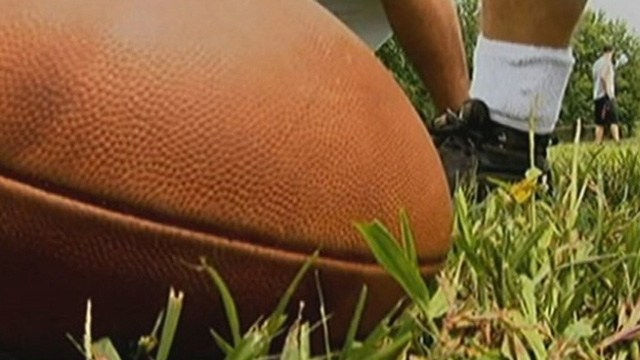 ATLANTA (AP) — This was a game Tennessee had no business winning.

What a boost for embattled coach Butch Jones in the season opener.

Despite getting dominated statistically and surrendering five rushing touchdowns to new Georgia Tech quarterback TaQuon Marshall, the Volunteers rallied from a pair of two-touchdown deficits in the second half to somehow pull out a 42-41 victory in the second overtime Monday night.

Tennessee came up with a crucial turnover late in the fourth quarter, blocked a field goal attempt on the final play of regulation and stopped Marshall on an attempted 2-point conversion when the Yellow Jackets decided to go for the win rather than settle for a tying PAT that would have forced a third overtime.

“We talked all week about the will to win,” Jones said. “We knew this would be a game where we had to show some resolve, some grit.”

Georgia Tech ran 96 plays, rushed for 535 yards and finished with 655 yards overall, compared to 59 plays and 369 yards for the Vols. The Yellow Jackets had 33 first downs and an overwhelming advantage in time of possession during regulation, holding the ball for 41 minutes, 27 seconds.

“It was a game we should’ve won,” Georgia Tech coach Paul Johnson said, “and we didn’t.”

In a decision announced just minutes before kickoff, Marshall got the nod at quarterback over Matthew Jordan , the top backup to Justin Thomas the last two seasons. Johnson certainly made the right call there.

In his first college start, Marshall rushed for 249 yards — the most ever by a Georgia Tech QB — and also set a school record for rushing touchdowns with three in regulation and two more in overtime, the latter a 13-yard scamper in which he broke a tackle and reached the end zone standing.

But Tennessee finally figured out a way to stop him on the 2-point try.

Running to his right, Marshall wasn’t able to get outside as the blocking broke down, so he attempted to cut inside. Going down short of goal line, he flung a desperation heave toward KirVonte Benson that appeared to possibly be a lateral. But the closest official immediately ruled an incomplete pass when the ball touched the turf, even though Benson tried to power into the end zone.

“That should have been a walk-in,” Johnson moaned. “We screwed that up, so we didn’t deserve to win.”

John Kelly scored the tying touchdown in regulation on an 11-yard run with 1:29 remaining, and then added two more TD runs in overtime. He finished with 128 yards rushing and four TDs.

Tennessee came up with a pair of turnovers, including J.J. Green’s fumble when the Yellow Jackets appeared to be driving for a clinching score in regulation. Rashaan Gaulden stripped the ball and Micah Abernathy fell on it for the Vols at the 7 with 4:50 remaining.

Tennessee, with a new quarterback of its own, drove 93 yards to make it 28-all. Quinten Dormady, who beat out redshirt freshman Jarrett Guarantano as the replacement for Pittsburgh Steelers draft pick Joshua Dobbs , hooked up with Marquez Callaway on a 40-yard reception that gave the Vols a chance.

Georgia Tech drove into position for walk-on Shawn Davis’ 36-yard field goal attempt on the final play of regulation. The kick was low, Paul Bain got a hand on it and the game carried on.

Tennessee went ahead for the first time all night on its final touchdown and PAT.

It was all that mattered to the Vols.

Some of the biggest cheers back in the Tennessee locker room were reserved for Bain, a walk-on who helped send the game went to overtime.

“I just fired off the line and things happened so fast,” he said. “I’m just glad I was able to get my hands on it.

Jones pointed out that Bain “pays his own way for school” and “has two jobs to make ends meet.”

Callaway stepped up big when top receiver Jauan Jennings went out with an injury in the first half.

The sophomore had a pair of touchdown catches and finished with four receptions for 115 yards.

“He sparked us and made some very, very key plays for us,” Jones said.

Tennessee: A huge boost for a team that hasn’t won a Southeastern Conference title since its national championship season of 1998 . There’s a lot of work to do defensively, but Dormady bounced back from a shaky start to complete 20 of 37 for 221 yards. Callaway is surely headed for an increased role in the offense, especially if Jennings is out for an extended period with what appeared to be a hand or wrist injury.

Georgia Tech: It will be interesting to see how the Yellow Jackets bounce back from such a crushing defeat. Marshall proved a worthy successor at quarterback to three-year starter Justin Thomas, not only with his running ability but also showing a good arm (5 of 9 for 120 yards). Unfortunately for the Yellow Jackets, the defense totally broke down toward the end of the game despite being on the sideline much of the night. There’s also going to be a change at kicker after Davis missed a pair of field goals. Freshman signee Brenton King will get a shot in the next game, according to Johnson.

Tennessee: The Vols host Indiana State in their home opener on Saturday.