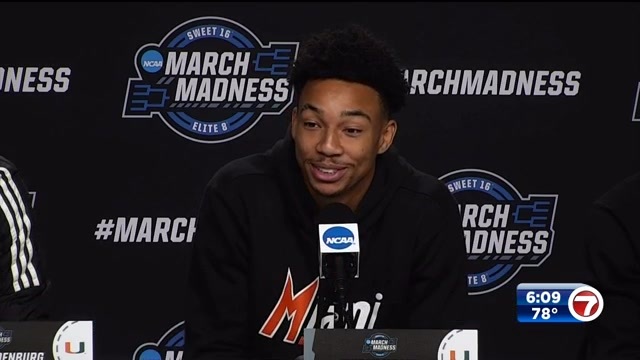 A junior from Indianapolis, Pack made 5-of-8 3-pointers. The Kansas State transfer poured in 13 points in the game’s opening 10 minutes to help stake the Hurricanes to a 25-16 lead.

“Nigel was really terrific all game long,” Canes coach Jim Larrañaga said of Pack’s first collegiate appearance in Indiana. “ … He’s doing a fantastic job (in multiple facets) and I expect his scoring will continue to be there because he’s such an outstanding shooter.”

Trey Wertz scored 15 points, Dane Goodwin 14 and Marcus Hammond 12 for the Fighting Irish (8-6, 0-3), who lost for the fourth time in their last five games.

“We’re struggling confidence-wise, no question about it,” Notre Dame coach Mike Brey said. “In our losses, we’ve really turned the ball over and it’s just killing us.”

The Irish had a season-high 17 turnovers, including five by Wertz and four by Goodwin. The Canes committed just nine, and outscored Notre Dame 25-7 on points off turnovers.

“The second half we really picked it up at both ends of the court,” said Larrañaga, whose team trailed 34-33 at halftime. “We played better defense, we rebounded better, we attacked the basket more.”

Miami led most of the way, but a Hammond four-point play pulled Notre Dame to as close as 51-49 at 12:12 to go. But Miami responded with a 9-0 run to largely seize control and later led by as many as 14. The Irish got no closer than eight, that coming at 2:30 left in the game.

Miami: The Canes’ schedule is tough from here and their only league road wins are over a pair of teams that are winless in ACC play, but 4-0 in the conference is a good start. Miami will still have to face No. 17 Duke twice, plus visit No. 25 North Carolina, Clemson, NC State, Pittsburgh and Virginia Tech.

Notre Dame: The sinking Irish have a steep hill to climb to reach the NCAA tournament, considering they have a trio of double-digit nonconference losses to unranked clubs. Notre Dame visits both No. 13 Virginia and No. 17 Duke in February, and has a pair of meetings with No. 25 North Carolina.

As dejected as Brey was over his own team’s loss, he was quick to ask “what’s the football score?” in reference to Notre Dame’s Gator Bowl contest against South Carolina that started about 90 minutes after the basketball game began.

Notre Dame: Plays three of its next four on the road, beginning Tuesday at Boston College.