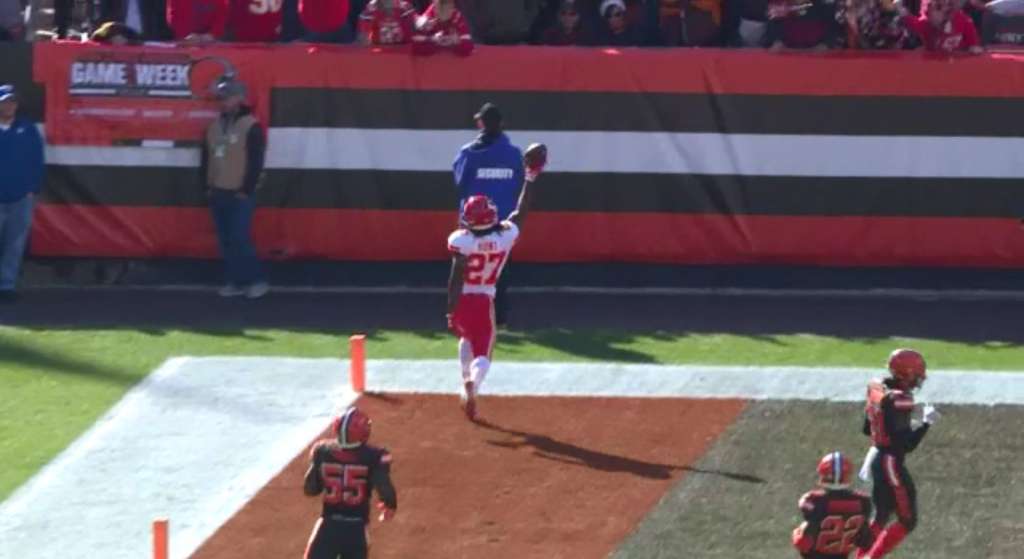 CLEVELAND (AP) — Kareem Hunt promises to change. The NFL will hold him to his word.

The league suspended the Cleveland Browns running back for eight games on Friday for two “physical altercations,” one in which Hunt shoved and kicked a woman in a hotel hallway while he played for Kansas City.

Hunt will not be eligible to play until November as part of his penalty for violating the league’s personal-conduct policy. The 23-year-old, who quickly became a star player with the Chiefs before his conduct prompted the team to cut him during a Super Bowl push last season, will not be paid during the half-season suspension, which will be lifted on Aug. 31. He can practice and will be eligible to play in Cleveland’s preseason games.

Hunt will not appeal the league’s findings, which came following an investigation into the hotel incident and a fight in June at Put-In-Bay island, a resort area in Ohio.

“I want to again apologize for my actions last year,” Hunt said in a statement released by the Browns. “I know that my behavior hurt a lot of people, and I again apologize to them. I respect the league’s decision on discipline, and I appreciate the time I spent with Commissioner Goodell last week. I’m grateful for my time with the Browns over the last month and thankful to all the people in the organization that have welcomed me.

“I also appreciate all of the support I received from my union through this process. My commitment to earning the trust of the league, my teammates, the organization and this community through my actions will continue, and I understand there is a lot of hard work ahead of me before I’m able to fully return to playing the game I love.”

The league recently completed its investigation that included a review of law enforcement records, video and electronic communications and interviews with witnesses as well as Hunt.

In November, surveillance video taken in February in a Cleveland hotel where Hunt stayed during the offseason. The disturbance involved several people, and Hunt was seen shoving the woman before kicking her as she scrambled to get off the floor. Police investigated but the woman did not file charges against Hunt.

The disturbing images drew a public outcry and resulted in the Chiefs cutting ties with one of their top players in the final month of the regular season. Hunt later admitted lying to the Chiefs about the situation.

Hunt was placed on the commissioner’s exempt list and missed Kansas City’s final five games. His career appeared at a crossroads before the Browns, at the prompting of general manager John Dorsey, signed Hunt in February. Dorsey drafted Hunt while he was in Kansas City and felt the Ohio native was contrite and deserved a second chance.

NFL spokesman Brian McCarthy told The Associated Press the league inquired about a third matter involving Hunt. In January 2017, a man alleged that Hunt and a teammate assaulted him in a Kansas City nightclub. McCarthy said Hunt will not be disciplined for that.

In recent months, Hunt has been receiving counseling and assured Goodell he “accepts responsibility for his conduct and the discipline that has been imposed,” the league said. “He has committed to take advantage of available resources to help him grow personally and as a member of the Cleveland community, and to live up to his obligations as an NFL player.”

Dorsey has been unwavering in his support of Hunt.

“I know that he has really done a nice job of being committed and of doing that work so that he can be the best version of himself,” Dorsey said Thursday. “I know he has been diligently working on that.”

Hunt has been working out at the Browns’ facility in Berea, Ohio, and is scheduled to take part in the team’s offseason program starting April 1.

Hunt’s suspension caps a busy week for the Browns, who acquired superstar wide receiver Odell Beckham Jr. on Tuesday in a trade with the New York Giants. Cleveland has also made several other moves in free agency.

As a rookie, Hunt led the league in rushing with 1,327 yards, scoring eight touchdowns. He also showed his versatility by catching 53 passes for 455 yards and three TDs. In 11 games last season, he ran for 824 yards and seven touchdowns.

Hunt’s arrival has made Browns third-down running back Duke Johnson expendable and the team has considered trading him.

Johnson has been a valuable and versatile player since Cleveland drafted him in 2015. He led the team in receptions and yards receiving in 2017, but got fewer chances last season because of rookie Nick Chubb, who rushed for 996 yards and scored eight TDs.