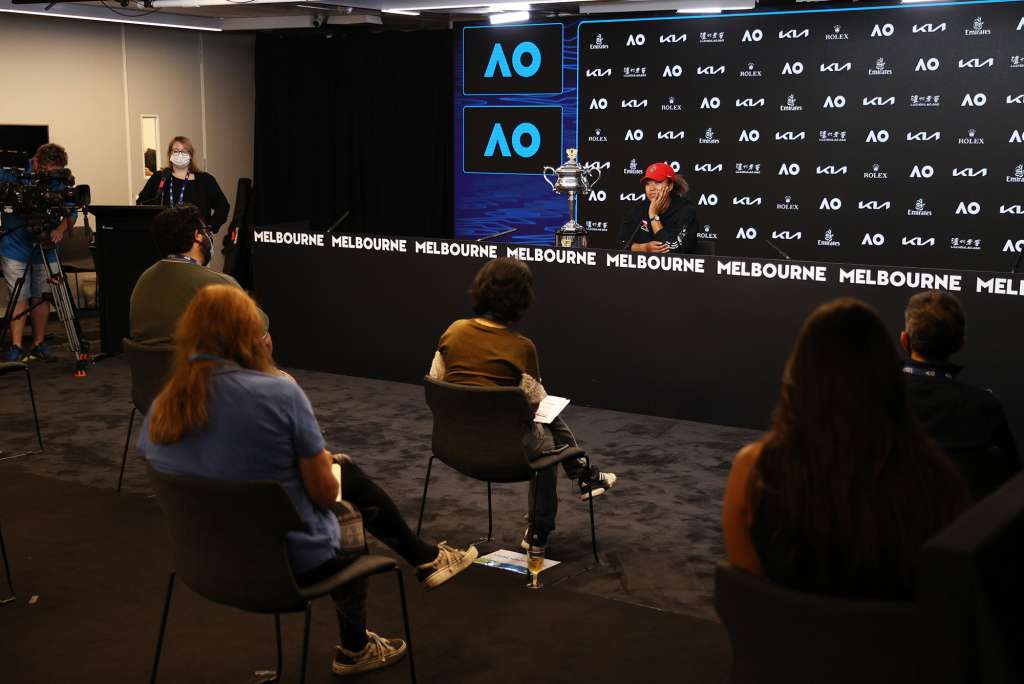 (CNN) — Naomi Osaka says the press conference format between journalists and athletes is “out of date,” as the Japanese star penned a first-person essay on mental health in TIME magazine’s latest issue.

The four-time grand slam champion who withdrew from the French Open in May, citing mental heath reasons, revealed afterwards she had “suffered long bouts of depression” since winning her first grand slam title in 2018. Osaka later withdrew from Wimbledon.

However, the four-time grand slam champion said it was never her intention to “inspire revolt.”

“I love the press; I do not love all press conferences,” wrote Osaka. “However, in my opinion (and I want to say that this is just my opinion and not that of every tennis player on tour), the press-conference format itself is … in great need of a refresh.”

“I believe that we can make it better […] Less subject vs. object; more peer to peer.

“Athletes are humans. Tennis is our privileged profession and of course there are commitments off the court that coincide. But I can’t imagine another profession where a consistent attendance record […] would be so harshly scrutinized,” adds Osaka.

The 23-year-old Osaka will make her return to competitive tennis at the Olympic Games in Tokyo later this month. She is one of Japan’s best gold medal prospects.

Citing her natural introversion and desire to not court the spotlight, Osaka went on to say in her first-person essay for TIME: “I always try to push myself to speak up for what I believe to be right, but that often comes at a cost of great anxiety.

“I feel uncomfortable being the spokesperson or face of athlete mental health as it’s still so new to me and I don’t have all the answers. I do hope that people can relate and understand it’s OK to not be OK, and it’s OK to talk about it.”

‘I should have been prepared’

With seismic events, including last summer’s BLM protests, the coronavirus pandemic and the global rise in anti-Asian hate crime exposing the fault lines in society, Osaka says she should have foreseen the mixed reaction that followed her decision to disengage with media duties earlier this year.

“You can never please everyone,” she writes in the essay. “The world is as divided now as I can remember in my short 23 years.”

“I should have been prepared.”

Osaka goes on to propose that athletes should have the right to take a mental break from media scrutiny on rare occasions, without being subject to strict sanctions.

She highlights, “You wouldn’t have to divulge your most personal symptoms to your employer; there would likely be HR measures protecting at least some level of privacy.”

When announcing her default from Roland Garros, Osaka revealed she had experienced long bouts of depression after winning her first grand slam title in 2018.

“I felt under a great amount of pressure to disclose my symptoms — frankly because the press and the tournament did not believe me. I do not wish that on anyone,” she says.

“I also do not want to have to engage in a scrutiny of my personal medical history ever again. So I ask the press for some level of privacy and empathy next time we meet.”

After Osaka withdrew from the French Open, the French Tennis Federation (FFT) said it was “sorry and sad for Naomi Osaka.”

“The outcome of Naomi withdrawing from Roland-Garros is unfortunate. We wish her the best and quickest possible recovery, and we look forward to having Naomi at our Tournament next year,” French Tennis Federation President Gilles Moretton said in a statement.

“As all the Grand Slams, the WTA, the ATP and the ITF, we remain very committed to all athletes’ wellbeing and to continually improving every aspect of players’ experience in our Tournament, including with the Media, like we have always strived to do.”