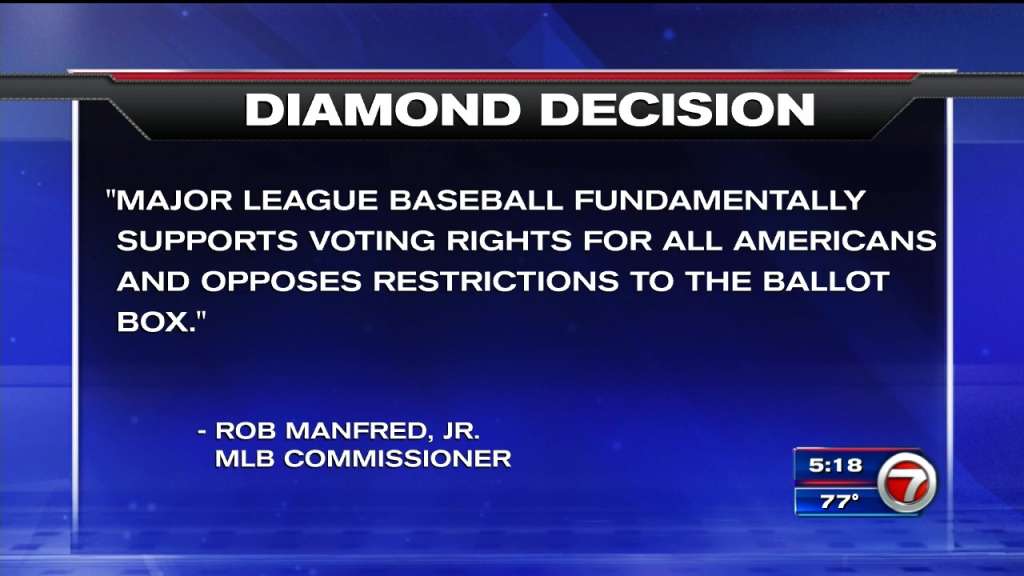 MLB had awarded the game to Atlanta in May 2019 and the game was scheduled for July 13 as part of baseball’s midsummer break that includes the Futures Game on July 11 and Home Run Derby the following night.

Commissioner Rob Manfred made the decision to move the All-Star events and the amateur draft, which had been scheduled to be held in Atlanta for the first time. A new ballpark for this year’s events wasn’t immediately revealed.

Manfred made the decision after discussions with the Major League Baseball Players Association, individual players and the Players Alliance, an organization of Black players formed after the death of George Floyd last year.

“I have decided that the best way to demonstrate our values as a sport is by relocating this year’s All-Star Game and MLB draft,” Manfred said in a statement. “Major League Baseball fundamentally supports voting rights for all Americans and opposes restrictions to the ballot box.”

“Fair access to voting continues to have our game’s unwavering support,” Manfred said.

Other sports have moved high-profile events because of social issues.

In the early 1990s, the NFL shifted the Super Bowl out of Arizona after the state failed to make Martin Luther King Jr. Day an official holiday.

The NBA moved the 2017 All-Star Game out of Charlotte, North Carolina, when the league took issue with a state law that cut anti-discrimination protection for lesbian, gay, bisexual and transgender people.

The NCAA for years didn’t hold championships in states where the Confederate battle flag was officially recognized.

This year’s All-Star Game will include honoring Hank Aaron, the Braves’ Hall of Famer and former career home run champion who died on Jan. 22 at age 86.

“We will continue with our plans to celebrate the memory of Hank Aaron during this season’s All-Star festivities,” Manfred said. “In addition, MLB’s planned investments to support local communities in Atlanta as part of our All-Star legacy projects will move forward. We are finalizing a new host city and details about these events will be announced shortly.”

MLB canceled last year’s All-Star Game, which had been scheduled for Dodger Stadium in Los Angeles, due to the late and shortened season caused by the novel coronavirus pandemic. The 2022 game will be played at Dodger Stadium.

MLB has awarded the 2026 All-Star Game to Philadelphia as part of the celebration of the 250th anniversary of the Declaration of Independence.