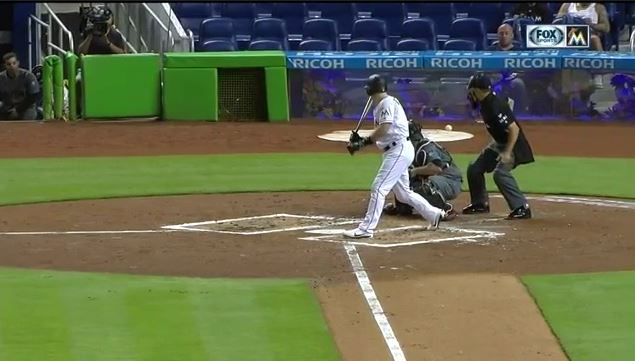 ATLANTA (AP) — As the Miami Marlins began a weeklong road trip, they couldn’t help but wonder what will be there when they get back home.

Hurricane Irma was bearing down on South Florida with potentially catastrophic force, a beast of a storm that already killed at least 11 people and left thousands homeless across the northern Caribbean.

The Marlins began a four-game series in Atlanta on Thursday night, having arrived on a chartered flight that was more crowded than usual after the team allowed the families of players and staff to come along on the road trip.

While that helped ease some immediate concerns, it was impossible to ignore what was going on back in Miami. Highways were jammed as more than a half-million people were ordered to evacuate amid a desperate search for gasoline and lodging .

“We’re still witnessing Harvey and what went on with the Gulf Coast and that devastation,” Miami manager Don Mattingly said, referring to the storm that less than two weeks ago inundated the Houston area with record rainfall and flooding. “Obviously, to see another one coming, you pay attention.”

The Marlins were mired in a slump that has all but knocked them out of the playoff race. They took another blow in the opener of the series at SunTrust Park, giving up two runs in the bottom of the ninth inning to lose 6-5 .

It was Miami’s fifth straight loss and 10th in 11 games, leaving them eight games back in the NL wild-card race with only 22 games left in the regular season.

Dan Straily, who started Thursday and lasted five innings, insisted the players were able to block out any concern about the approaching storm once they took the field.

“There’s one thing ballplayers are really good at, and that’s compartmentalizing our life,” he said. “It’s not that we’re not thinking about that, but for three hours a night we focus on something else completely. Speaking for myself, I can tell you that when I was on the mound I didn’t want to think about what’s going to happen down there the next few days.

“Obviously we’re hoping for the best down there for our homes, but I don’t think it’s affecting our play,” he added.

Before the game, however, Irma was a dominant topic in a rather subdued Miami clubhouse. Players tracked the potential path of the Category 5 storm on their cellphones and hit up reporters for the latest news.

“The reality is: that is reality,” Mattingly said. “It’s a tough situation and a lot of people have a chance of being affected or have already been affected. We’ve got guys that grew up in Cuba. We’ve got guys from the Dominican (Republic). We’ve got guys from Puerto Rico. So, it’s going to affect a lot of people and has a chance to affect a lot of things. To ask them not to be thinking about it at all, I think, is really naive. But I also think as professionals, these guys are pretty used to dealing with things.”

The Braves offered free tickets to fans from Florida, Georgia and South Carolina displaced by the hurricane. SunTrust Park opened this season alongside Interstate 75, a popular choice for Floridians driving north through Georgia to escape the storm.

“We know how difficult it has been for those who have had to pack up and leave their homes as Hurricane Irma approaches,” said Derek Schiller, the Braves president of business. “We hope we can help take their mind off the storm for a few hours by coming to enjoy a baseball game.”

In addition, Atlanta Motor Speedway opened its camping facilities Thursday to evacuees seeking refuge from Irma. The NASCAR track, which is about 25 miles south of the city, offered both its RV and tent campgrounds free of charge, including access to hot showers and restroom facilities.

The massive complex is equipped to handle thousands of campers during its annual race weekend.

The Marlins will play four games in Atlanta through Sunday, then head to Philadelphia for a three-game series that begins next Tuesday. They finally return to Miami on Sept. 15 to host a series against Milwaukee.

No one knows what will be awaiting them in South Florida.

“You feel for the people that had to stay,” center fielder Christian Yelich said. “There’s a lot of uncertainty down there.”

Yelich prepared for the possibility that the Marlins may not be able to return home as scheduled next week. When Hurricane Harvey pummeled the Texas coast, the Houston Astros were forced to shift a three-game series against the Texas Rangers to Tropicana Field in St. Petersburg.

Now, the state of Florida is in the line of fire.

“I packed for probably an extra week or two on the road, just in case,” Yelich said. “You never know what’s going to happen. Hopefully it doesn’t come to that. But you’re just hoping everybody comes through it all right. You see the videos and the pictures from the islands that this thing’s been hitting, and it’s a lot of devastation.”