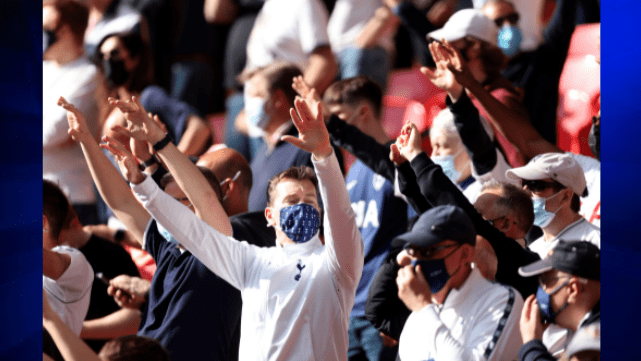 A late second-half header from Aymeric Laporte topped off a brilliant performance from City, which has dominated this trophy in recent years. It has now matched Liverpool’s record of eight League Cup titles.

It’s the first of three possible trophies Pep Guardiola’s side can still win this season, with the English Premier League all but wrapped up and with the team in the semifinals of the Champions League.

Earlier this month, Cheslea ended City’s chances of winning an astonishing quadruple when it beat the Manchester side in the FA Cup semifinals.

City was able to celebrate Sunday’s victory in front of 8,000 spectators at Wembley Stadium, with the final being used as a pilot event, possibly paving the way for the return of large crowds in United Kingdom stadiums.

Each club was allocated 2,000 tickets for fans with the rest distributed to local residents and National Health Service workers.

A beaming Pep Guardiola celebrated in front of City fans after the full-time whistle before praising his team for a remarkable achievement.

“It [having fans] is much better, it’s not full but it was a good noise and celebrating with them makes it much better,” Guardiola told Sky Sports after the match.

“Today we are incredibly happy to win the title, four in a row in this competition but especially, in the last 33 games, we’ve won 30. This is amazing,” he said.

Tottenham’s interim manager, Ryan Mason, was taking control of just the second game of his career, having only replaced Jose Mourinho last week, while Guardiola claimed the 25th major trophy of his managerial career.

The mismatch manifested itself on the pitch with Spurs second-best in every department. It has now failed to win a trophy in last 13 years.

Harry Kane, who recovered from an injury scare to start the match, occasionally looked threatening but Spurs were simply outclassed by City’s stars, with the likes of Kevin De Bruyne, Phil Foden and Riyad Mahrez running the game.

Goalscorer Laporte might count himself lucky to have stayed on the pitch after committing two fouls that could easily have resulted in two yellow cards. However, the Frenchman got away with just one and soared above Tottenham’s defense to head in a free-kick in the 82nd minute.

City could have scored many more, but a mixture of good goalkeeping from Hugo Lloris and lackluster finishing kept the score 1-0.

The final was played a week to the day that the controversial, and now failed, European Super League was announced, with both Manchester City and Tottenham receiving heavy criticism for signing up to the new format.

The ordeal reminded everyone just how important fans are to football and that was underlined again on Sunday with City’s players praising the limited number of supporters in the stadium for creating a brilliant atmosphere.

“A massive difference. It’s so good to have the fans back,” Man of the Match Mahrez told Sky Sports. “The atmosphere, even with 8,000, was amazing and we look forward to having more fans there.”

“We knew it was going to be tough,” he said. “We stayed focused, we kept dominating, we kept passing the ball and then we scored. I think we deserved to win today.”

Match-winner Laporte echoed Mahrez but told Sky Sports that he wants to see more fans in stadiums in the future.

“We are so happy to see them [fans] here,” he said. “I think there could be more, but we are very happy to have the sports from these fans.”