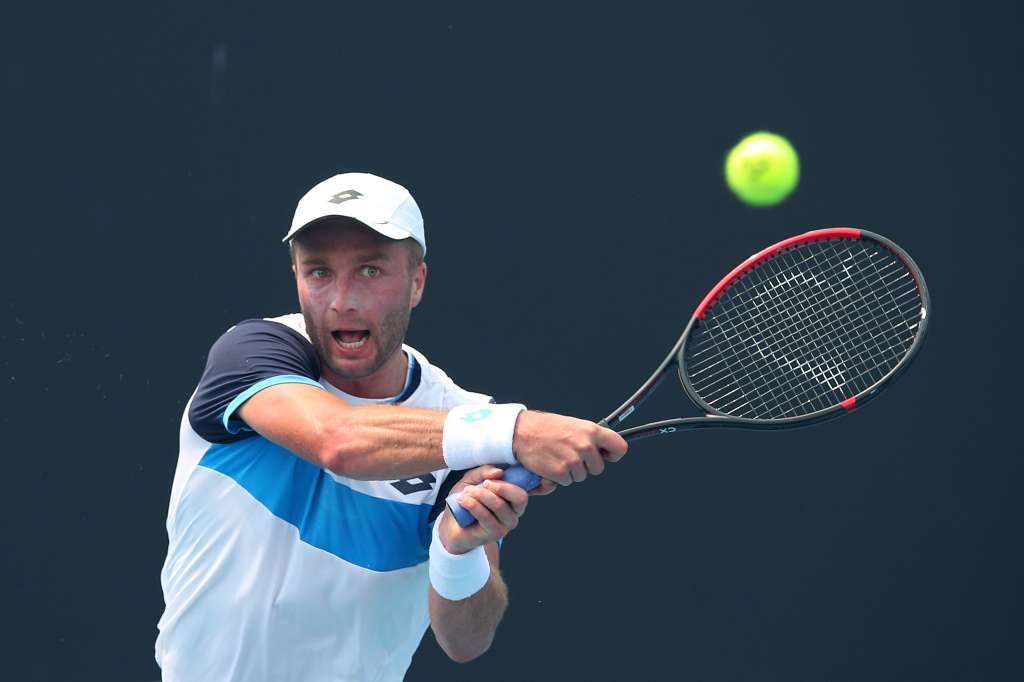 MELBOURNE, AUSTRALIA - JANUARY 14: Liam Broady of Great Britain plays a backhand in his match against Ilya Ivashka of Belarus during 2020 Australian Open Qualifying at Melbourne Park on January 14, 2020 in Melbourne, Australia. (Photo by Graham Denholm/Getty Images)

Liam Broady, ranked No. 234 in the world, said it “boils my blood” to think of the conditions players have competed in ahead of the year’s first grand slam.

According to Broady, an email was sent to male players by the ATP and Australian Open claiming that conditions were “playable” and “healthy,” something the Briton called a “slap in the face.”

Broady wrote on Twitter: “Citizens of Melbourne were warned to keep their animals indoors the day I played qualifying, and yet we were expected to go outside for high intensity physical competition?

“What do we have to do to create a players union? (sic) Where is the protection for players, both male and female?

“On tour we let so many things go that aren’t right but at some point we have to make a stand. ALL players need protection, not just a select few.”

The fires that have swept through the states of Victoria and New South Wales (NSW) this season are some of the worst Australia has seen.

At least 28 people have died, and in the state of NSW alone more than 3,000 homes have been destroyed or damaged.

The air quality in Melbourne was recorded as “unhealthy” and “very unhealthy” on Wednesday, but heavy showers have helped clear the smog.

Qualifying and practice has been suspended a number of times this week due to poor air quality.

“Conditions at Melbourne Park are being constantly monitored and further decisions will be made using the onsite data and in close consultation with our medical team, the Bureau of Meteorology and scientists from EPA Victoria,” said a statement from tournament organizers Wednesday.

Head of Tennis Australia Craig Tiley said the conditions were fit to play in.

“Absolutely we understand the anger,” he told reporters. “We’ve invited the players to come in at any time and have a conversation.

“Our medical team were satisfied with the conditions that the players were competing in as per all of the research and the data and the science that they have, but they also make an assessment.

“You could have been two hours into those matches and have 25 people presenting themselves with a medical condition that may be related to the pollutants. If that’s the case, inform me and we stop.”

Slovenia’s Dalila Jakupovic was forced to withdraw from her qualifying match because of breathing difficulties, while other players have had to use breathing apparatus at the side of the court.

“In 35 years, its the first time I had to use an asthma spray to help me breathe better (sic),” wrote world No. 203 Dustin Brown on Twitter.

Broady’s message has been echoed by a number of players on social media.

American Nicole Gibbs posted a photo on Twitter of smog over Rod Laver Arena, writing: “Sorry — did I play in a higher intensity version of this yesterday without being medically informed?”

Belgian Kirsten Flipkens, meanwhile, wrote: “Tennis is a GAME!! Health ALWAYS comes first!! Why in the world would you let players/umpires/ballkids suffer in these conditions?! WHY???

“Players retiring and ballboys collapsing from breathing problems… I am speechless…”

The buildup to the tournament has been dominated by the wildfires, with the game’s top players taking part in a charity match on Wednesday to raise funds for relief efforts.