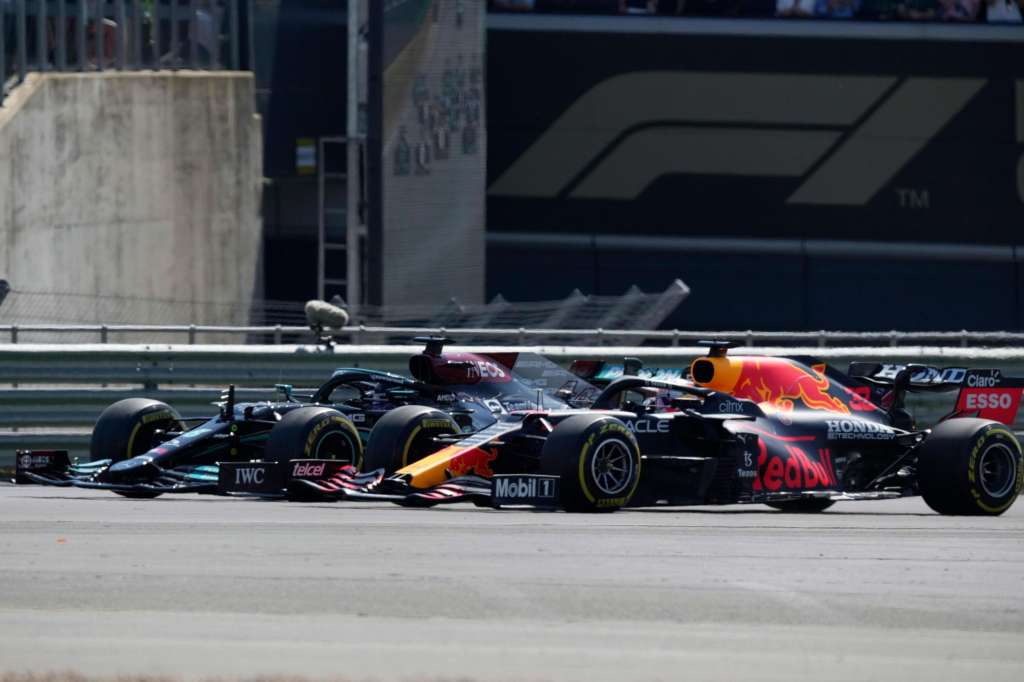 Mercedes driver Lewis Hamilton, left, and Red Bull 's Max Verstappen of the Netherlands take a curve side-by-side at the start of the British Formula One Grand Prix, at the Silverstone circuit, in Silverstone, England on July 18. (Photo by Jon Super/AP)

(CNN) — Formula One world champion Lewis Hamilton and Max Verstappen, who is leading the drivers’ championship this season, were involved in a high-speed collision on the opening lap of the British Grand Prix on Sunday.

Hamilton was given a time penalty but in a dramatic conclusion to the race, the Mercedes driver overtook Charles Leclerc two laps from the end to secure his eighth British GP victory and reinvigorate his title defense.

Hamilton made a number of attempts to overtake Verstappen on that first lap and when the drivers arrived at Silverstone’s Copse Corner, the Briton’s front-left wheel touched the Red Bull driver’s back-right tire.

Verstappen spun off the track and across the gravel before crashing into the barriers, though the Dutchman was able to walk away from his wrecked car.

The race was suspended with Ferrari’s Leclerc in the lead.

“Following an assessment by the trackside doctors at Silverstone Circuit Medical Centre, Max Verstappen has been taken to a local hospital for further precautionary tests,” tweeted Red Bull later on Sunday.

“Everyone who’s driven that corner knows you don’t stick a wheel up the inside at Copse,” Horner told Channel 4. “He’s put him in the fence. Thank god he’s not been hurt. It was a desperate move.”

Race stewards then handed Hamilton a 10-second penalty for the incident with Verstappen.

“I was ahead coming in there,” said Hamilton in a radio call with his team. “It was my line. I was giving the guy space.”

Despite the penalty, Hamilton chased down Leclerc and on lap 50 swept past the Ferrari — on Copse Corner of all places — to take the lead and then secure his 99th race victory, with the Briton’s Mercedes teammate Valtteri Bottas finishing third.

Hamilton’s win gave him 25 points to put him just eight behind Verstappen in the drivers’ standings.

Sunday’s race was attended by 140,000 people, according to organizers at Silverstone.