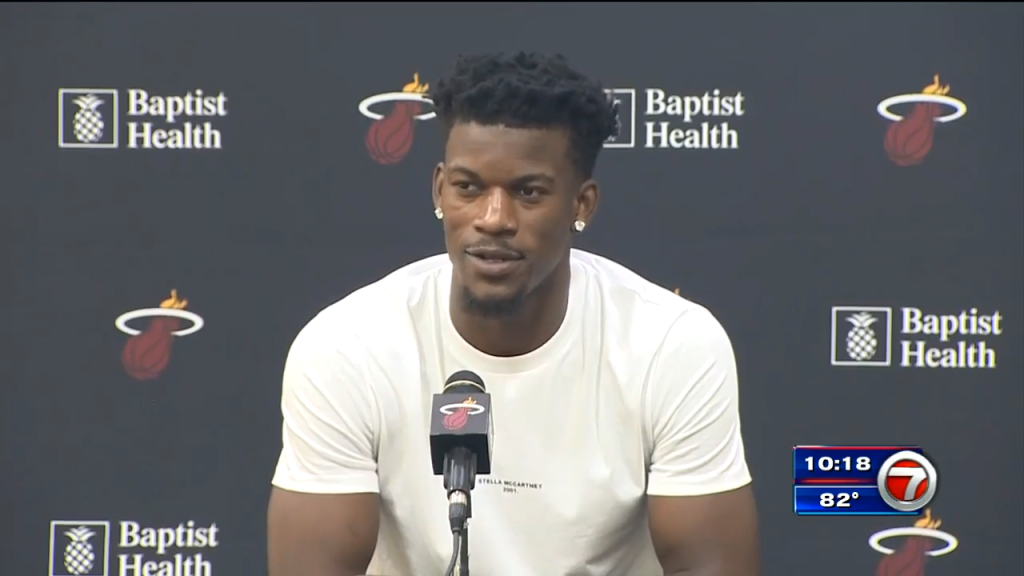 MIAMI (AP) — Jimmy Butler wants this made clear: He is not in Miami to be the next Dwyane Wade.

He wanted to be in Miami to honor his retired friend’s legacy — and pick up where Wade left off.

Wade’s “one last dance” is over, his retirement has come after 16 seasons and now Butler has arrived to become the Heat’s go-to guy in winning time. Adding Butler on a four-year contract was the centerpiece of the Heat’s offseason, and even in a year of transition — learning to play without Wade, again — Miami believes a return to the playoffs is well within reach.

“Seeing what he helped build here — and I never want to compare myself to him, but I think that what they have going on here and the way they go about everything here is the right way,” said Butler, who went to Marquette (as did Wade) and was Wade’s teammate in Chicago in 2016-17 after the three-time champion left Miami the first time. “That’s what I’m banking on, that we continue to do that.”

Wade’s last home game as a Heat player was against Philadelphia, with Butler one of the opponents that night. The scene, the way the Miami crowd feted Wade, it all made an impact on Butler’s thinking as far as where he wanted to play this season and beyond.

Heat coach Erik Spoelstra compared Miami’s move to bring Butler in to one of the other seismic moves in franchise history — the one, early in Pat Riley’s tenure with the team, that landed Alonzo Mourning.

“We bring in a super, like-minded player to our culture,” Spoelstra said. “In my mind, Jimmy is having the same impact Zo had when he joined the team.”

Butler thought one of the adjustments he’d have to make with the move to Miami was the process of getting to know what makes his new teammates tick. Turns out, that’s almost been seamless — a good sign for a team going into a season with Miami’s traditional high expectations.

“I’m just happy to be able to hoop,” Butler said. “We’ve got a great group of guys. We like being around each other. Everyone’s laughing and smiling. It’s going to be a long year and a long great year. Everyone around here is looking forward to it.”

Here are some other things to know about the Heat entering the season:

The Heat are Butler’s fourth team — fourth team since 2017, too — and he says he wants Miami to be the final stop in his career.

Butler has been to the postseason seven times, including with Philadelphia last year, yet still hasn’t gotten past the second round. Miami also hasn’t been past the second round since its last NBA Finals trip in 2014, yet it believes adding Butler is the first huge footstep toward reversing those recent fortunes.

Miami was awful from the foul line last year. The Heat shot 60% or less from the free-throw stripe a league-worst 17 times last season — and went 2-15 in those games. Look no further than that as the reason why Miami wasted a chance at a postseason berth. Of those 15 losses, five came in games where Miami wound up losing by five points or fewer; the Heat wound up missing the playoffs by two games.

Another key area where the Heat must get better this season is defending home court.

No. 13 pick Tyler Herro is loaded with confidence, and the Heat aren’t holding him back. The rookie from Kentucky quickly has earned the trust of teammates, not just because of his strong summer league and preseason performances but because of his practice habits as well.

“We are trying to prepare Tyler as much as we can to be ready to help us win,” Spoelstra said.

Udonis Haslem is back for his 17th season, all with Miami.

The Heat offered Haslem a chance to become a coach this season instead; he decided to remain as a player, even with the knowledge that he likely won’t get much court time.

With Wade retired, he’s the last remaining player from any of Miami’s three championship teams still on the roster.