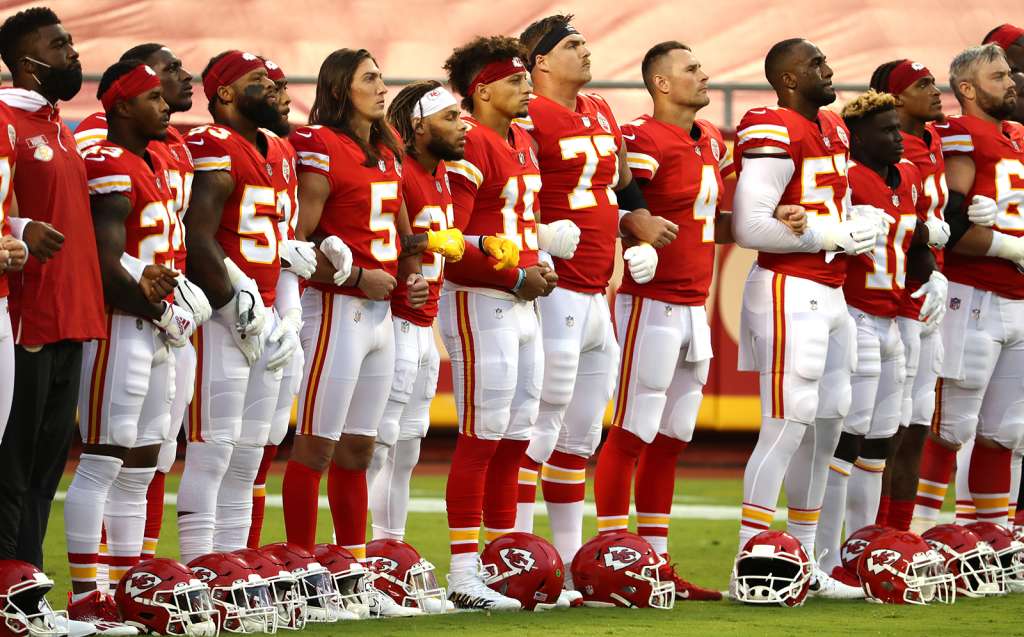 However, things will be very different this year.

There will be no fans in most stadiums to start the year, and you may not see some of your favorite players suit up due to the pandemic.

With most teams playing today, here’s what you need to know with the first NFL Sunday.

Commissioner Roger Goodell announced a series of social justice initiatives the league has planned, including helmet decals, a voter activation push and phrases stenciled in the end zones.

Teams will have the phrases “It Takes All of Us” and “End Racism” painted in each team’s end zones all season long.

The NFL will play the song “Lift Every Voice and Sing” — known as the Black national anthem — before games on opening weekend, while airing footage that showcases the social justice work of players and teams.

Goodell said that a number of players told him voting was the number one issue that was important to them, which helped spur NFL Votes, a voting initiative the league launched in July.

The initiative will focus on three pivotal parts of the electoral process: voter education, registration and activation. Education programs have been conducted with players on all 32 teams, and Goodell said that the league encouraged teams to offer their stadiums as polling centers.

Goodell, who said last month that he wished the league had “listened earlier” to Colin Kaepernick when he began protesting during the National Anthem back in 2016, also announced that the league’s players will be able to “shine a spotlight on and honor victims of systemic racism and police brutality” with decals on their helmets that bear the victims’ names.

Players will wear those decals all season long.

Quarterback Patrick Mahomes looked as sharp as ever, and rookie running back Clyde Edwards-Helaire will only bolster one of the league’s highest-scoring offenses.

The Chiefs look like they haven’t missed a beat, and are the favorite to win it all again this year and repeat as Super Bowl champions.

Quarterback Tom Brady shook up the football world when he decided to leave the New England Patriots and sign with the Tampa Bay Buccaneers as a free agent.

With the Buccaneers, Brady will have arguably the most talented arsenal of weapons surrounding him on offense. All Pro players Mike Evans and Chris Godwin are two of the most talented receivers he’s ever played with, and tight end Rob Gronkowski came out of retirement to join Brady.

While the 43-year-old Brady has shown signs of decline in recent years, he is widely considered the greatest quarterback of all time and could lead the Buccaneers to its first playoff win since the team won the Super Bowl in 2003.

This is a new era for the Patriots without Brady under center. The team will display an entirely different offense as Newton is a mobile quarterback.

While the Patriots have had a number of star players opt out of playing this season due to concerns over Covid-19, it’s hard to count coach Bill Belichick out.

Can the NFL finish out the season?

There were some doubts that the NFL would be able to kick off its season as scheduled due to the pandemic, but the league was able to get through training camp and start the season as planned on Thursday night.

While the league plans to play out the season as scheduled, things could quickly change with thousands of new coronavirus cases still being reported across the US.

For a full-contact sport like football — in which it’s virtually impossible to avoid being close to others, even under the strictest guidelines — it is all but certain more players will test positive for the coronavirus, experts say.

The NFL’s chief medical officer, Dr. Allen Sills, acknowledged in an interview with NPR that it is anticipated the league will have more Covid-19 cases during the season.

“We expect to have positive cases,” Sills said. “No matter how careful that we try to be and how many protocols we have in place, we know that this disease remains endemic in our societies and our communities, and it’s highly contagious.”

An outbreak could easily force the NFL to change its plans, and the league may have no choice but to shut down the season if a major outbreak occurs.