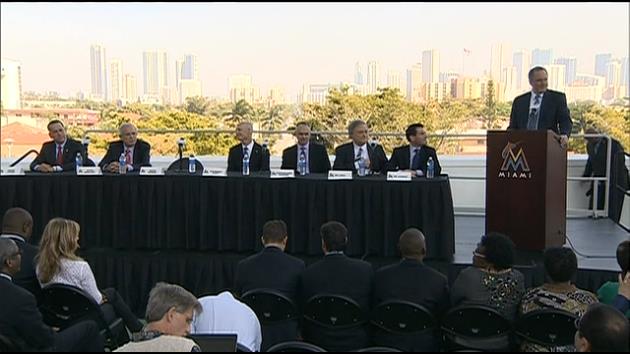 MIAMI (AP) — The Miami Marlins held a festive news conference Friday in anticipation of hosting the 2017 All-Star Game, with a color guard, video highlights, a speech by Gov. Rick Scott and the introduction of more than half a dozen former All-Stars with ties to the team.

“Miami is a city that knows how to celebrate,” baseball Commissioner Rob Manfred observed.

Manfred’s announcement at Marlins Park confirmed the site of the 2017 game, and the occasion had a celebratory tone because it was a long time coming.

The Marlins started play in 1993 and two years later were awarded the 2000 All-Star Game at Pro Player Stadium. But after founding owner Wayne Huizenga dismantled the roster of at team’s 1997 World Series champions, Major League Baseball took away the game in 1998 and awarded it to Atlanta.

Marlins Park opened in 2012, and the team appears to be on an upswing following a busy offseason.

“The `97 decision was somebody else’s decision,” said Manfred, who replaced Bud Selig as commissioner three weeks ago. “All I’m going to say is we’re thrilled to have awarded the 2017 All-Star Game to the Marlins. … It was time for baseball to recognize and pay back South Florida for what they did in building this stadium.”

Team owner Jeffrey Loria has attracted plenty of criticism for his team’s stadium deal, small payrolls and frequent roster purging. But he won praise for signing NL home run champion Giancarlo Stanton to a record $325 million, 13-year contract in November, and there’s increased interest in the team, which has finished last in the NL in attendance in nine of the past 10 years.

“I’m optimistic about baseball in Miami,” Manfred said. “You have a great facility. They have a great young team. And I think this market will support a winner.”

Loria said he was gratified the All-Star Game will come to Miami in the franchise’s 25th season.

About 200 people gathered on the left-field plaza overlooking downtown and a sunplashed field for Manfred’s announcement. The audience included Stanton and ace Jose Fernandez, both former All-Stars; Jack McKeon, who managed the NL All-Star team in 2004; and Marlins executive Jeff Conine, the All-Star MVP in 1995.

“It’s great to have an All-Star Game here,” Scott said. With a smile he added, “I hope we have them every year now.”

To his right sat the mayors of Miami, Miami-Dade County and Miami Beach. The 2017 MLB All-Star FanFest will be held at Miami Beach’s new convention center now under construction.

The All-Star Game will be played in Cincinnati this year and in San Diego in 2016, meaning a National League team will host the game in three consecutive seasons. To help compensate, the American League will bat last in the 2016 game, Manfred said.

Four current ballparks have yet to be assigned an All-Star Game — the homes of the Yankees, Phillies, Nationals and Rays. The Braves plan to move into a new ballpark in 2017.