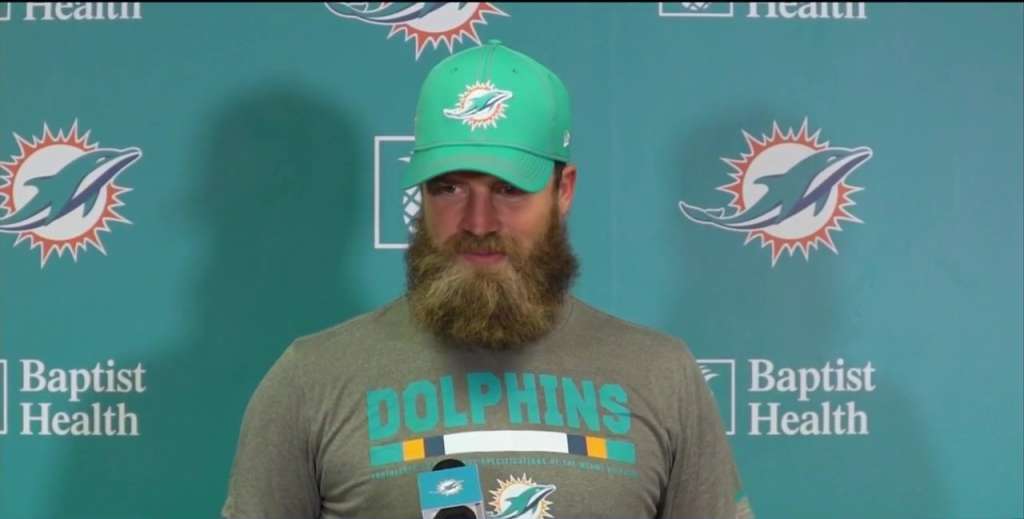 MIAMI (AP) — With one more win by the Miami Dolphins, Ryan Fitzpatrick will be playoff-bound for the first time in his 16-year career.

By beating the Bills, the Dolphins (10-5) would clinch only their third playoff berth since 2001, and Fitzpatrick is trying to end a personal postseason drought. He has thrown 5,054 passes for eight teams, all in the regular season.

“I am well aware that I’ve never been to the playoffs, I promise you,” the 38-year-old Fitzpatrick said. “And we would love nothing more than to get there.”

Coach Brian Flores’ two-quarterback system is working, even if he recoils from that label.

“The label is we’re going to do what we’ve got to do to win,” Flores said.

Fitzpatrick came off the bench in the final 10 minutes Saturday to throw for 182 yards, including a desperation heave he completed in the final seconds even though his face mask was being jerked. The pass and penalty netted 49 yards to set up a field goal for a 26-25 victory.

Fitzpatrick replaced Tagovailoa, who threw for only 94 yards on 22 attempts. The rookie improved to 6-2 as a starter but has now been benched twice in the fourth quarter, stirring plenty of debate about whether he deserves the No. 1 job in January — or next season.

“He has played fairly well,” Flores said. “People may disagree, but we’ll just agree to disagree in that instance.

Should the Dolphins lose Sunday, they can still make the playoffs with a loss by one of three teams they’re battling for an AFC wild-card spot.

A loss by Baltimore at Cincinnati, by Indianapolis at home against Jacksonville, or by Cleveland at home against Pittsburgh would get Miami into the postseason even with six defeats. The Ravens and Colts are favored by two touchdowns, however, and the Browns are also favored.

The Dolphins are 5-point underdogs. FiveThirtyEight puts their chances of making the playoffs at 73%.

Second-year running back Myles Gaskin, who has been sidelined because of a knee injury and COVID-19 protocols, played for only the second time since Nov. 1 and had the best game of his career.

Gaskin rushed for 87 yards and had two scoring receptions, including one when he turned a short pass into a 59-yard touchdown. He totaled 169 yards from scrimmage.

Cornerback Byron Jones had his worst game of the year. In the wild final minutes he was burned on a long pass for an 85-yard touchdown and called for a 49-yard pass interference penalty.

Officiating on both plays was questionable, with “calls that could go either way,” Flores said.

“I have a lot of confidence in Byron,” the coach said. “He has played well all year. Thankfully we were able to overcome those two situations.”

0 for 10 — the Raiders on third downs Saturday. For the season Miami leads the NFL in third-down defense at 31%.

The previous time the Dolphins played at Buffalo in January was in 1991. In December they’ve lost three in a row there by a combined score of 85-33.