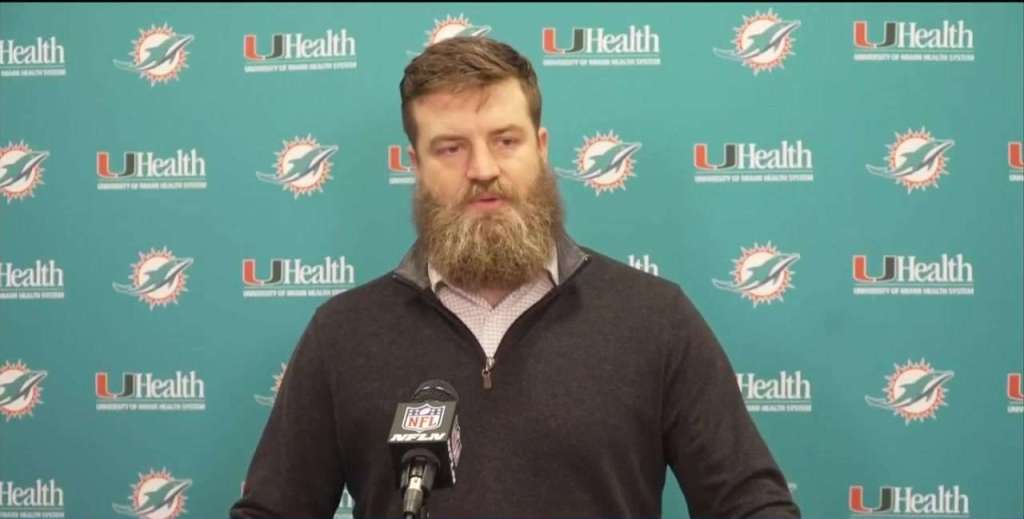 MIAMI (AP) — Any debate about who should start for the Miami Dolphins this week at quarterback ended Thursday with backup Ryan Fitzpatrick’s positive test for COVID-19.

Fitzpatrick, who came off the bench to rescue his team last week, is expected to miss Sunday’s regular-season finale at Buffalo as Miami tries to clinch an AFC wild-card berth.

“It hurts,” safety Eric Rowe said. “He’s a leader of our team. He brings energy, even in the Zoom meetings. But you’ve got to push forward. I’m just praying for his health.”

Coach Brian Flores had already said rookie Tua Tagovailoa will start his ninth game in a row Sunday, to the consternation of many Miami fans who prefer Fitzpatrick. The 38-year-old veteran replaced Tagovailoa last week in the fourth quarter and orchestrated an improbable comeback win at Las Vegas that allowed the Dolphins (10-5) to retain control of their playoff chances.

Miami signed Jake Rudock as Tagovailoa’s new backup. Rudock has thrown five passes in the NFL, all in 2017, and has spent multiple stints on the Dolphins’ practice squad in 2019-20.

The Dolphins also placed linebacker Elandon Roberts on injured reserve because of a knee injury. Everyone else on the active roster practiced Thursday, an indication no player was identified as a high-risk close contact with Fitzpatrick.

His availability for a possible wild-card playoff game next week is in question. The 16-year veteran has never made the postseason, and the Dolphins will clinch a postseason berth if they beat Buffalo.

“He’s our guy,” receiver Isaiah Ford said. “But if this year has taught us anything, it is to expect the unexpected. We all love Ryan, but we’ve got a job to do. I think everybody is focused on getting it done.”

COVID-19 cases are on the rise in Florida, which reported 17,192 new cases Thursday, the most yet in the state in a single day.

The Dolphins’ lineup has endured only modest disruptions because of the pandemic. Just one starter — running back Myles Gaskin — went on the COVID-19 list in December, and he missed two games.

“Everyone has had to make some sacrifices,” Flores said last week. “Overall it has been good, as long as guys follow the protocols, make the sacrifices and make smart decisions. We’re still in it, though. We’re not done by any stretch of the imagination.”