Dolphins coach, players speak out about Hamlin’s collapse amid outpouring of support 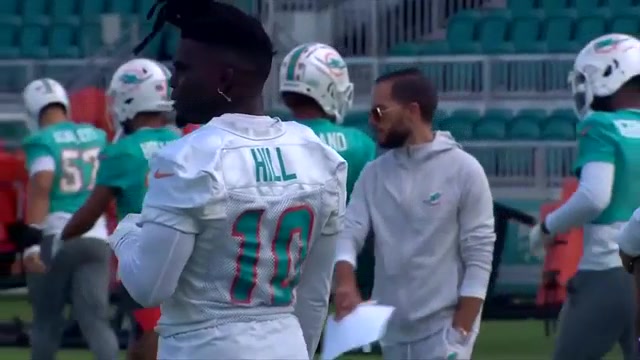 The Miami Dolphins’ locker room at their training facility in Miami Gardens was somber on Wednesday, the first day that the entire team was together since they saw Hamlin go into cardiac arrest while playing against the Cincinnati Bengals at Paycor Stadium.

The Dolphins started the day with a team meeting to make sure players are emotionally in the right headspace to practice.

“You know, it’s hard for me. The families, you know, that’s where it gets me,” said Dolphins head coach Mike McDaniel.

The situation is a shock to the players who hit the gridiron for a living.

“I’m still dealing with it, guys are still dealing with it in their own ways,” said Dolphins defensive lineman Christian Wilkins. “It was definitely a tough situation to see, because at the end of the day, no matter how much we might have a rivalry with Buffalo, or you might go at it with other teams … we’re all brothers in arms.”

“They made me think about it, but at the same time, I’ve got to do what I’ve got to do, you know what I mean?” said Dolphins running back Jeff Wilson Jr. “All I can do is pray to God to keep His hands over me and keep me safe, because what I do is how I got in the league, and that’s what’s kept me in the league, so I can’t change that.”

McDaniel remained hands on throughout the team’s practice.

Psychologists have also been made available, with the understanding that there is still a game Sunday that will determine the Dolphins’ playoff fate.

“The really good pros that I’ve been around are able to compartmentalize these things, but if this hits you a certain way, that may not matter,” said Dolphins punter Thomas Morstead.

Dolphins long snapper Blake Ferguson, whose brother plays for the Bills, was one of many Dolphins players who tweeted support for Hamlin and his charity. They’ve now raised over $6 million.

“It’s not about me, it’s about Damar and his family, and if I can be a platform to spread that news and spread that word to fans, I’m happy to do it,” said Ferguson.

Tuesday night, Hamlin’s uncle, Dorrian Glenn, gave an update on the health of his nephew, who remains in critical condition.

“Right now, they got him on a ventilator, so they’re trying to get him to breathe on his own, so we’re just kind of taking it day by day,” he said. “I’m still in the [intensive care unit]. They have him sedated.”

Support continues to pour in from across the league, including from Bengals head coach Zac Taylor, who witnessed the incident unfold live.

“Obviously, as an organization, we’re doing everything we can to support them, but at the same time give them privacy,” he said, “and so, I think that’s something you’ve really seen both communities rally around — Buffalo, Cincinnati, the NFL community — really rally around Damar and the Bills.”

“Anyone who watched football and knows football, knows what that kind of collapse is about,” he said, “It’s not a turned ankle or something, and the look on the faces of those players standing around him told me everything I needed to know. This was very, very serious and critical life-and-death situation.”

Fans remain outside the Cincinnati area hospital where Hamlin was transported more than 48 hours after he was admitted.

Those closest to Hamlin said they are overwhelmed by the support they have received.

“The support around Damar, like continuing, that is, is just phenomenal. I think just prayers, well wishes and, to be honest, from Damar’s perspective is, like, just being a good person, doing good things. That’s what he would want for people,” said Hamlin family spokesperson Jordon Rooney.