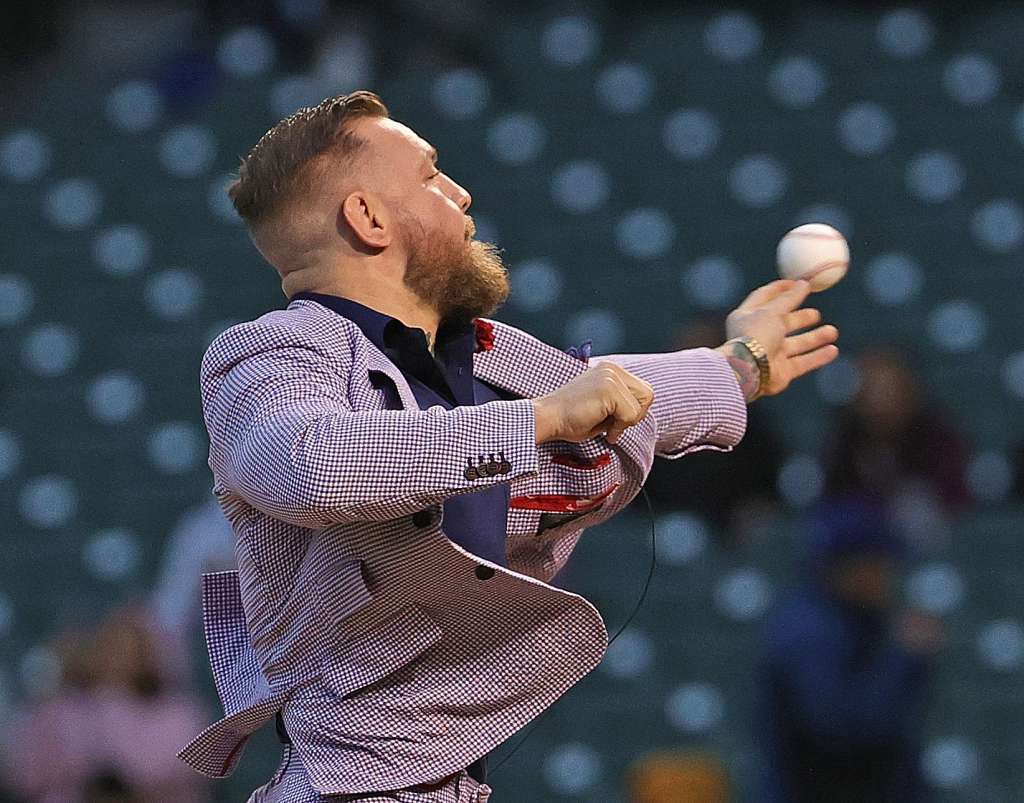 CHICAGO, ILLINOIS - SEPTEMBER 21: Conor McGregor throws out a ceremonial first pitch before the Chicago Cubs take on the Minnesota Twins at Wrigley Field on September 21, 2021 in Chicago, Illinois. (Photo by Jonathan Daniel/Getty Images)

The MMA star threw the ceremonial first pitch ahead of the Chicago Cubs’ game on Tuesday, only for his attempt to sail high into the air towards the stands.

“I cannot stop laughing at this,” fellow UFC fighter Justin Gaethje wrote on Twitter. “Every MMA fighter that has represented us doing this has looked terrible but this takes the cake.”

Not that McGregor seemed to think it was a particularly bad effort.

“The most devastating first pitch ever seen in the iconic Wrigley Field,” was the 33-year-old’s summary.

“The venom is there, the power is there. It’s a little off accurate-wise … It was either lob it friendly or aim to take him off his feet. If that was on target, we would have had a problem, I’d say.”

McGregor suffered a gruesome leg injury as he was beaten by Dustin Poirier in July — the same one he lent back on to deliver his wayward pitch on Tuesday.

“I’m on the one leg, you can see me based fully on the left leg that was just recently injured,” McGregor added. “I’m happy with that, I’ll take that on board.”

McGregor joins a list of celebrities to deliver iconic bad first pitches which includes rapper 50 Cent — whose attempt at Citi Field in 2014 was sent wide to the left, the opposite direction to McGregor’s — and pop star Carly Rae Jepsen, who put her head in her hands after sending her pitch bouncing along the floor.