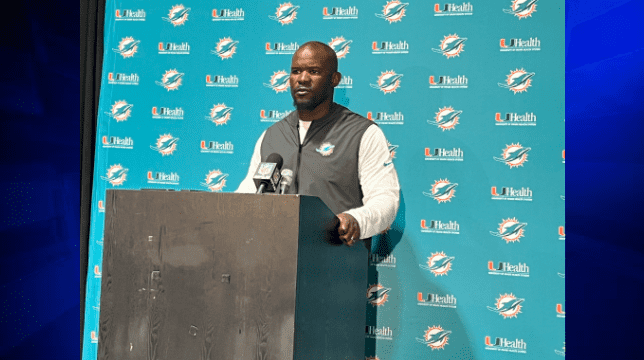 TAMPA, Fla. (AP) — Tom Brady threw for 411 yards and five touchdowns as Antonio Brown became the fastest NFL player to 900 receptions and the defending Super Bowl champion Tampa Bay Buccaneers rolled to a 45-17 rout of the Miami Dolphins on Sunday.

Brady threw for more 400 yards with five TDs in the same game for the first time in his 22-year career.

Brown scored on receptions of 62 and 4 yards, joining Julio Jones, Jerry Rice, Torry Holt and Andre Johnson as the only players in league history with 12,000 career receiving yards in fewer than 150 games. The 33-year-old receiver extended the NFL’s longest active streak with at least one catch to 141 consecutive games and also became the fastest to 900 career receptions on his first catch of the day.

Brown reached the milestone in 143 career games. Hall of Famer Marvin Harrison was the previous fastest at 149.

Mike Evans had TD catches of 34 and 22 yards, and Giovani Bernard also scored on a 10-yard reception from Brady, who finished 30 of 41 with no interceptions — the third straight game the Bucs (4-1) have gone without a turnover.

The Dolphins (1-4) have lost four straight following a season-opening victory over New England.

Miami’s Jacoby Brissett completed 27 of 39 passes for 279 yards, two TDs and an interception in his third consecutive start filling in for the injured Tua Tagovailoa.

Myles Gaston scored on receptions of 1 and 37 yards for the Dolphins, who trailed 24-17 heading into the fourth quarter.

Leonard Fournette scored on a 5-yard run and Brady threw his TD passes to Evans to break the game open before being replaced by backup Blaine Gabbert with 7:06 remaining.

Dolphins: WR DeVante Parker (shoulder/hamstring) was inactive after being limited in practice and listed as questionable. … Brissett appeared to tweak his hamstring scrambling for no gain in the opening quarter, but remained in the game. … TE Adam Shaheen (ankle) left the game late in the second quarter.

Buccaneers: LB Jason Pierre-Paul (shoulder/hand) returned to the lineup after missing two games. CB Jamel Dean (knee) started after sitting out the previous week. … LB Lavonte David (ankle) limped off the field late in the first half and did not return.

Dolphins: travel to London to face Jacksonville next Sunday.

Buccaneers: at Philadelphia on Thursday night.