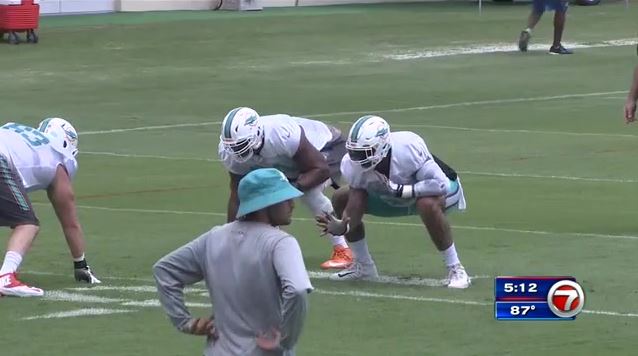 MIAMI (AP) — Hurricane Irma will have the Miami Dolphins setting up a temporary home in California, and make the New York Yankees the road team in their own city.

The powerful Category 4 storm continued forcing changes to sports schedules Friday, as it kept moving through the Caribbean and toward a probable weekend landfall somewhere in the state of Florida. And the uncertainty of where and how hard the storm will hit — the entire state is bracing for at least some significant impact — has meant that teams aren’t taking any chances.

So the Tampa Bay Rays, who opened their stadium to the Astros and Rangers after Hurricane Harvey, will now be the guests of the New York Mets. Major League Baseball announced that Citi Field will host what was supposed to be a Yankees at Rays series that starts Monday.

“Wherever we need to play, we’ll go play and hope for the best back home,” Rays manager Kevin Cash said in Boston, where Tampa Bay is playing this weekend.

Playing at other neutral sites, like the Baltimore Orioles’ Camden Yards and the Chicago White Sox’ Guaranteed Rate Field, was considered. But hotel availability was tough to find in both cities, and in New York only the Rays will need lodging.

The Rays will be the home team in the series, so the Yankees — who are 2-0 at Citi Field this season, part of their four-game season sweep of the Mets — will again be the road team in their crosstown rival’s park.

“I’ve watched Weather.com more than I have any advanced report on the Red Sox or anything like that,” Cash said. “There’s a lot of concern.”

The Red Sox are also watching Irma for multiple reasons. Boston’s spring training home in Fort Myers, Florida is also expected to get hit by the storm, and the Red Sox are scheduled to play at Tampa Bay next weekend.

“This is going to be a tough one for all of Florida, and we’re hopeful that there’s not too, too much damage,” Red Sox manager John Farrell said.

Concern over what Irma will do also has the Dolphins hitting the road much earlier than planned.

The Dolphins will practice next week in California in advance of their Sept. 17 game against the Los Angeles Chargers, a person familiar with the decision told The Associated Press. The person spoke on condition of anonymity because neither the team nor the league had publicly revealed the Dolphins’ plans.

The Dolphins were to open their season Sunday at home against Tampa Bay, but that game was moved to Week 11 when it became apparent that Florida was squarely in Irma’s path.

Jacksonville will play at Houston on Sunday, and isn’t planning to go home until at least Monday. The Jags say they’re staying put after their opener against the Texans, since forecasters are saying Jacksonville could see significant Irma-related impact early next week.

Irma has also caused the cancellation most of the state’s major college football games this weekend: No. 16 Miami at Arkansas State and No. 21 South Florida at Connecticut were called off in large part because of concerns about how the Hurricanes and Bulls would be able to get home.

No. 10 Florida State, No. 22 Florida and Central Florida all canceled home games because of Irma as well.

And there’s already some concern about whether next weekend’s college schedules in Florida — particularly the annual rivalry game between the Hurricanes and Seminoles, set to be played Sept. 16 in Tallahassee — will be affected by the storm.

Miami defensive coordinator Manny Diaz thinks it “will just about take a miracle” for college football games to be played in Florida next weekend. He and Hurricanes coach Mark Richt have both tweeted this week, responding to criticism about Miami’s decision to not make the trip to Arkansas State.

Diaz evacuated with his family, saying he drove 13 hours out of Miami. Members of the Hurricanes’ men’s and women’s basketball teams have also relocated to Atlanta, seeking safety from the storm that has sent massive numbers of Floridians heading north and out of Irma’s projected path.

“The entire state right now is in the cross hairs of the strongest storm ever in the Atlantic. Ever,” Diaz wrote. “And we are still talking about football with all these lives in the balance?”