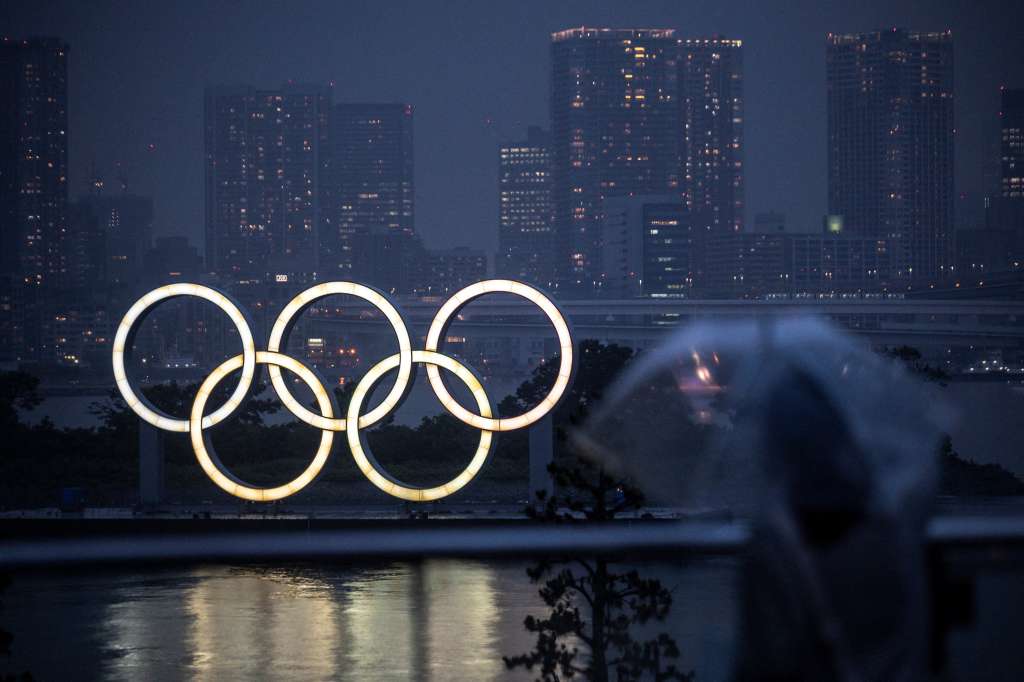 A woman walks past the Olympic Rings lit up at dusk in the rain, on the Odaiba waterfront in Tokyo on July 9, 2021. (Photo by Charly TRIBALLEAU / AFP) (Photo by CHARLY TRIBALLEAU/AFP via Getty Images)

(CNN) — An alternate on the US women’s gymnastics team has been placed in isolation after testing positive for Covid-19 on Sunday, USA Gymnastics announced in a Monday statement.

A second alternate on the team is also in isolation after having had close contact with the athlete who tested positive, USA Gymnastics said.

USA Gymnastics said its Olympic athletes were moved to separate lodging accommodations and a separate training facility on Monday, as originally planned, where they will continue preparations for competition.

The gymnast was staying in Inzai City in Chiba Prefecture, Japan, for pre-camp ahead of the Tokyo Olympics which start on Friday.

The gymnast has no symptoms and is quarantined in her hotel room while she waits for the public health center to decide on whether or not to hospitalize her.

The gymnast who tested positive has not been identified. On June 27, USA Gymnastics announced its women’s artistic gymnastics team roster and included Kayla DiCello, Kara Eaker, Emma Malabuyo, and Leanne Wong as the replacement athletes.

Tokyo 2020 reported Monday that there are 61 Covid-19 cases linked to the Olympic Games.

An unidentified overseas visitor tested positive for Covid-19 at the Tokyo Olympics athletes’ village, organizers said on Saturday — the first such case amid concerns the Games could become a superspreader event.

American tennis star Coco Gauff said last week on Twitter that she had tested positive for Covid-19 and was pulling out of the Olympics.

Athletes are just starting to arrive for the Games, which run July 23 through August 8.

About 11,000 athletes from around the world will stay in 21 residential buildings of the Olympic Village.

The rising number of Covid-19 cases tied to the competition has fueled concerns as to whether the Olympics can be safely held during the ongoing pandemic.

Japan grappled with a second wave of infections in the spring, with numbers peaking in April and May with close to 6,000 newly recorded cases per day. Cases began falling in June, but have risen again in recent weeks.

Organizers announced this month that the Tokyo venues will not have spectators due to the city’s coronavirus state of emergency — an unprecedented move, according to an International Olympic Committee spokesman.

USA Gymnastics provided background information on the protocols the women’s gymnastics team had been observing. Among the protocols:

• Japanese Covid-19 chaperones oversaw the delegation’s movements at the training facility and hotel.

• The delegation was not allowed outside the hotel grounds and was kept away from hotel guests via different pathways through the hotel.

• The delegation had designated restrooms not used by anyone else in the training facility.