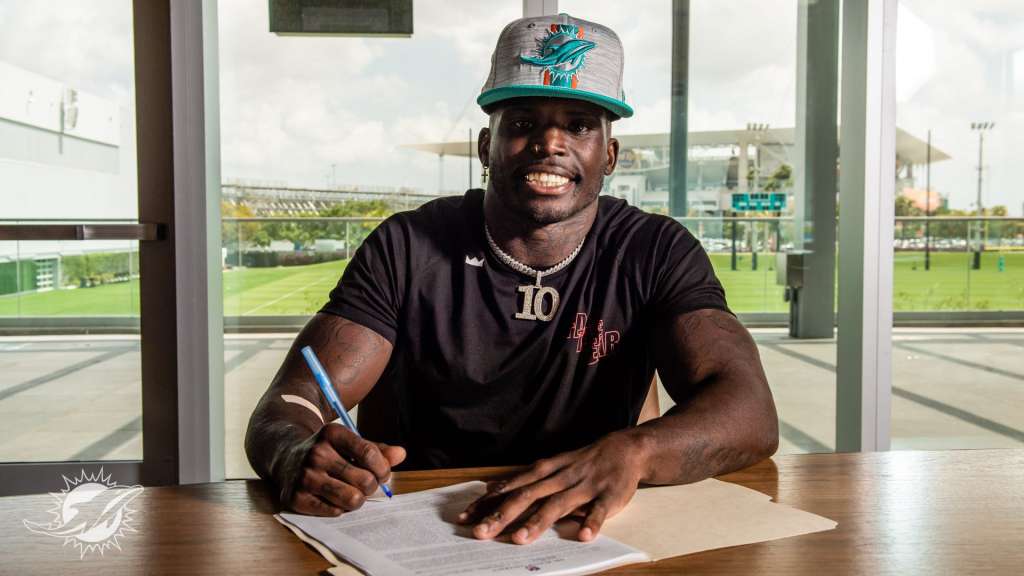 MIAMI GARDENS, Fla. (AP) — Tyreek Hill runs fast, talks fast, thinks fast. The standout wide receiver was not, however, a fast learner when he came to the Miami Dolphins.

The playbook may as well have been in a different language when Hill arrived in Miami from Kansas City this spring. He eventually went to receivers coach Wes Welker and revealed that he didn’t initially understand anything he was seeing.

“But once I learned the offense,” Hill said, “everything began to click.”

Hill’s days of not grasping the concepts within Miami’s playbook are over. And with Hill and Jaylen Waddle forming perhaps the NFL’s top speed duo at receiver, Miami hopes it has found a pairing that will give defenses nothing but headaches.

Hill has been in the NFL for six seasons, getting picked for the Pro Bowl all six times. And he has not been sitting idly during his first couple months as a member of the Dolphins.

There was his introductory news conference in March in which he said the value of his new contract — $120 million over four years, $72.2 million guaranteed — nearly made him cry. There was the podcast in June that ruffled some feathers when he said Dolphins quarterback Tua Tagovailoa was a more accurate thrower than Kansas City’s Patrick Mahomes, who has a Super Bowl ring and is generally considered one of the NFL’s best at his position.

And now the Dolphins are in camp, where Hill is making — what else? — a fast impression, opining on everything from those on the Miami roster who think they’re faster than he is (“He’s always chirping and talking about he’s the fastest,” running back Raheem Mostert said) to why he thinks linebacker Melvin Ingram shouldn’t wear jersey No. 6 (“you’re not LeBron, bro,” Hill said, though it fairness it should be noted that LeBron James switched from No. 23 to No. 6 again only last year).

The personality is enormous, without question.

Challenge him, and Hill will stand his ground. Challenge the Dolphins, and Hill stands up for everybody. Case in point: When asked Thursday to describe what kind of cars he and Waddle would be, Hill made sure to point out that he would be the faster model — but that together, they’d be a couple of speed racers.

Perhaps it’s fitting that the Dolphins play their home games at a Formula One track.

“If we were cars and we were racing you would compare him to like a 2003 Honda Civic and then I would be like a Maserati or something. You know what I’m saying?” Hill said. “But realistically, if me and him are on the same side, same football field, teammates side by side, it’d be like a Lambo and a Ferrari.”

As long as either the Lamborghini or Ferrari wins on game day, Dolphins coach Mike McDaniel will be thrilled. He says that in a short time with Hill he’s already ready to rank him as “one of the most competitive players I’ve ever been around in my life.”

“He is brash, extremely committed and competitive and that’s his driving force,” McDaniel said. “And if Tyreek is saying it, it’s because he believes it. … I can promise you that Tyreek didn’t get to where he is by thinking that he was an average receiver.”