After 4 years, Jeter still believes Marlins can be a winner 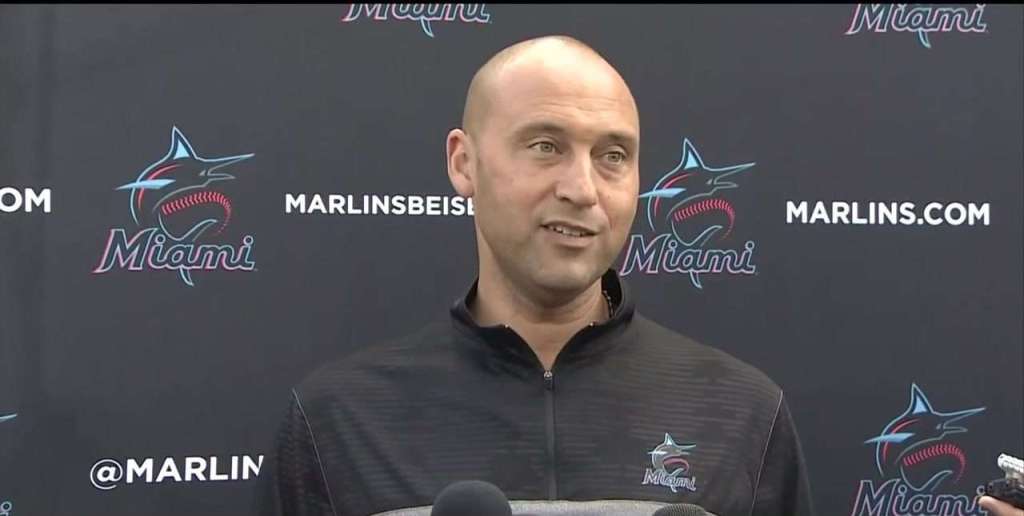 MIAMI (AP) — Derek Jeter put the finishing touches on his Hall of Fame speech as the plane that carried him to the enshrinement ceremony in Cooperstown, New York, was landing.

It was supposed to be done much earlier. Sometimes, things take longer than anticipated.

That’s a lesson Jeter is still learning as CEO of the Miami Marlins, his job for the last four years. The Marlins still aren’t winning at anywhere near the rate Jeter wants, and he said Saturday that he’ll personally be busy this offseason trying to help the team get better through free agency or trades.

“I expect this offseason to be active for us, whether that’s talking with free agents or exploring some other moves,” Jeter said. “But for the first time, really since we’ve been here as an ownership group, I expect to be pretty active — or I should say, have active conversations. There’s two sides to it.”

But even Jeter isn’t sure what that means. The Marlins’ revenue streams have improved over the last year with a new local television deal and a new naming rights agreement for the team’s ballpark, but Jeter didn’t reveal if Miami — which has ranked near the bottom of the MLB payroll lists for years — plans to spend more in 2022.

The rebuild under Jeter has not gone quickly nor easily.

Miami made the playoffs last season — when teams were playing only 60 games because of the pandemic — to officially end what was a 17-year postseason drought. The Marlins’ Don Mattingly was the overwhelming choice as the National League’s best manager in response to that playoff run and Miami entered this season with much optimism.

It’ll finish this season somewhere around 30 games under .500, and in Jeter’s four seasons — even with last year’s playoff berth — the Marlins have the worst record in the NL. Entering Saturday, Miami’s record since the start of the 2018 season was the third-lowest in all of baseball, a half-game behind Kansas City and ahead of only Detroit and Baltimore.

“No one’s happy. No one should be happy,” Jeter said. “Especially the players, coming off what they were able to accomplish last year, getting a taste in the postseason. I think the expectations were a little bit higher coming into this year. Anytime you go through a season like this you have to sit down, you have to evaluate, reevaluate, and see how we’re going to get better in the offseason for next year.”

Jeter is in daily contact with key people in the organization like Marlins general manager Kim Ng. He’s not around the team on a day-to-day basis, but the half-hour he spent watching batting practice on Saturday showed that it’s still a big deal for even baseball people to be around the Hall of Famer.

He took his spot at the back of the cage behind the plate, holding a half-dozen or more brief conversations with Marlins players, staff and even some members of the Philadelphia Phillies’ organization that headed over to say hello.

“Obviously, these guys know who Derek is,” Mattingly said. “Pretty much everybody you would ever talk to has respect for what he accomplished and what he stands for and how he went about it.”

Jeter went into the Hall of Fame earlier this year, after originally being slated to be enshrined in 2020 in a ceremony that wound up being delayed by the pandemic. He was one vote shy of being a unanimous Hall selection; his longtime New York Yankees teammate Mariano Rivera remains the only player to appear on 100% of ballots.

Jeter spent his entire 20-year MLB playing career with the Yankees, the shortstop being part of five World Series titles. He was a 14-time All-Star, the 1996 AL rookie of the year, and his 3,465 hits still ranks sixth-best on baseball’s all-time lists behind only Pete Rose, Ty Cobb, Hank Aaron, Stan Musial and Tris Speaker.

And when the playing days ended, the desire to run a team was clear. Jeter was part of the group that won the right in August 2017 to buy the Marlins, a $1.2 billion deal that became official about two months later. Jeter had a 4% stake in the purchase, coming on board as the CEO and overseeing baseball operations.

There are good signs: The pitching staff is a clear strength, the farm system is strong and Jeter believes that the young core in Miami is growing into a winner. It’s just not enough — yet.

“I didn’t come into it with any expectations,” Jeter said. “We knew what we wanted to do. We knew there’s steps along the way to improve. Those steps take time. Unfortunately, they take time.”

Just like the speech. That turned out to be a winner, and Jeter still thinks the Marlins will be as well.