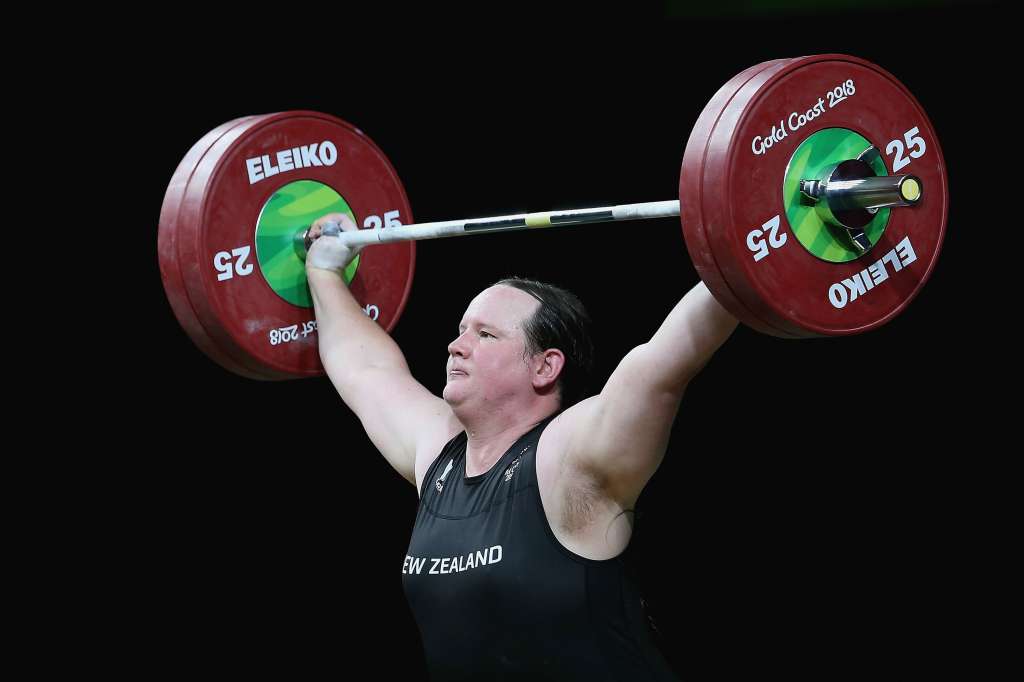 Laurel Hubbard of New Zealand competes in the Women's 90kg Final during Weightlifting on day five of the Gold Coast 2018 Commonwealth Games at Carrara Sports and Leisure Centre on April 9, 2018 on the Gold Coast, Australia. (Photo by Alex Pantling/Getty Images)

The publicity-shy weightlifter is set to be the first openly transgender athlete ever to compete at the Olympics, and her inclusion has generated a fierce debate on gender, sexism and sport.

To her supporters, the 43-year-old’s selection is a decades-in-the-making milestone that exemplifies the Olympic spirit of inclusion and could inspire other transgender athletes who are underrepresented in sport at all levels.

Hubbard’s opponents — including conservative British shock jock Piers Morgan — argue that being a transgender woman, or a woman who was assigned male at birth, gives her an unfair physical advantage. One of Hubbard’s competitors even called her inclusion “a bad joke,” saying it was unfair to cisgender women, whose gender identity matched their sex assigned at birth.

Hubbard hasn’t engaged with the firestorm, aside from in a brief statement saying she’d been “humbled by the kindness and support” from her countrymen.

Advocates for greater diversity in the sport say Hubbard’s selection shows transgender women don’t pose a threat to women’s sports — but the level of backlash against her suggests the fight for inclusion isn’t over.

How the rules have evolved

Kristen Worleybecame the first athlete to undergo an Olympic gender verification process when she tried to represent Canada in track cycling at the 2008 Olympics in Beijing.

Since then, she’s been fighting to make sure no one has to endure the same “humiliating” process.

In 2005, Worley — who is an XY female — had a physical examination in a room with four men: two sport administrators, one lawyer and one emergency doctor, Worley wrote in her book “Women Enough.” That followed an earlier physical examination with an endocrinologist, who asked about her sexuality.

“They viewed me as a threat to sport,” she wrote. “At best, I was trying to cheat; at worse, I was a freak. They felt utterly entitled to ask me embarrassing, intimate questions about the details of my surgeries, and talk openly about my body in front of me, as if I wasn’t there.”

The IOC rules — agreed on in 2003 and known as the Stockholm consensus — allowed transgender women and men to compete in the Olympics, as long as they had “surgical anatomical changes” (including having their testes or ovaries removed), obtained legal recognition of their assigned sex, and underwent hormone therapy for sufficient time to “minimize gender-related advantages.”

But Worley said those rules had no basis in science.

As Worley’s testes had been removed, her body produced almost no testosterone. She applied for an exemption to allow her to take testosterone so her body could stay healthy. It took three years before she was finally given permission to take testosterone, but it was still below the level she believed she needed for her body to be healthy.

Although testosterone is often associated with men, it also occurs naturally in women. It’s not entirely clear how important testosterone is for women, although testosterone supplements for women can help with energy levels, said Amy K. Weimer, the medical director of the University of California, Los Angeles’ Gender Health Program. Although most transgender women do not take testosterone supplements after transitioning, there are some cases where it is recommended, she said. “This area is very poorly researched and every person’s experience is different,” she said.

Scared and traumatized after the years-long process, Worley quit cycling. She says she lost her career, her Olympic opportunities, her health and her wellbeing. It was five years before she could face getting back on a bike.

“When you’re violated in that way … you never forget it. You just learn how to manage it,” she told CNN in a Zoom interview. The way her gender identity was publicly discussed destroyed her: “It made me feel like I was less than half a human being.”

Worley took a case against Canadian sporting bodies and the IOC to Ontario’s Human Rights Tribunal in 2015, arguing the enforcement of the 2003 Olympic policy constituted a violation of human rights. Ultimately, that case was settled in 2017, with Ontario Cycling Association and Cycling Canada committing to revising their policies.

At the same time, the IOC was reviewing its own policies, and in 2015, it agreed on new guidelines removing surgical requirements. Transgender women could compete in the female category, so long as they had declared their gender identity as female for at least four years, and could demonstrate their testosterone level was below 10 nanomoles per liter for at least a year.

Athletes who transitioned from female to male could compete in the male category without restriction.

What the science says

Joanna Harper helped write the 2015 Olympic rules but knows there is still a lack of data on how transitioning affects athletes’ sporting ability.

That’s something Harper, once one of Canada’s top marathon runners who has competed as a transgender woman for the past 17 years, studies at Loughborough University in the United Kingdom.

Harper said while trans women maintain some strength advantage over cis women, it’s unclear by how much, especially for elite athletes. In a sport like weightlifting, she said, strength is key — but agility and technique are important, too.

“Hormone therapy doesn’t turn trans women into cis women — it just doesn’t,” she said. “The important question is, can trans women and cis women compete against one another in meaningful competition? I would think that the answer is probably yes.”

In Hubbard’s case, she’s not seen as a strong medal contender. The New Zealander is ranked 15th in the world in the super heavyweight 87 kilogram-plus category, according to the International Weightlifting Federation. Her best total is 285 kilograms — significantly lower than top-ranked Li Wenwen’s 335 kilograms.

Harper published one of the first studies on transgender women in sport in 2015, which found seven of eight transgender female non-professional runners studied had significantly slower races times after transitioning. Ultimately, they performed at approximately the same level against their female peers as they had against their male peers prior to their transition.

And testosterone levels aren’t the whole story. Dick Swaab, a professor of neurobiology at the University of Amsterdam who has studied the brain chemistry of gender identity, said sensitivity to testosterone differs, meaning people may have a high level of testosterone but their body is not able to use it.

“The level of testosterone is only a little bit of information about the whole picture. I think the Olympic Committee hasn’t even thought about sensitivity and measurements of sensitivity,” he said.

But there’s a bigger question about what is a fair natural advantage.

Some people are born with attributes that make them natural athletes, but they are not treated differently, says Jaimie Veale, president of the Professional Association for Transgender Health Aotearoa and a senior lecturer in psychology at the University of Waikato. For example, women over six feet (1.82 meters) tall might have an advantage in sport, too, but no one’s saying they can’t compete.

The question of how transgender women participate is bigger than just the Olympics — it gets to the heart of what sport is about.

To Australian rules football player Emily Fox, 39, who has received death threats and threatening messages about her children, the presence of transgender women in elite sport is important for visibility — but ultimately, she sees Hubbard as an athlete who has worked hard and who deserves her place.

“Women’s sport has often been a space for women who have tried to exist outside of gender norms anyway, and particularly for same-sex attracted women, sport was often the safe space,” she said. “I think that (making sport more exclusive) inherently goes against what women’s sport has often stood for.”

Ryan Storr, a social scientist and co-founder of Australian charity Proud2Play that encourages LGBTQ participation in sport, said the Olympics were supposed to inspire young people to participate in sport. Instead, transgender youth, who report higher rates of suicidal ideation than cisgender youth, were being discouraged from being part of it.

A 2018 survey in New Zealand found trans and non-binary teenagers and adults were almost half as likely as the general population to have participated in any sports in the last month. More than half of those surveyed said they were worried about how they would be treated as a trans or non-binary athlete in competitive sport, and 58% had avoided the gym because they thought they would be mistreated.

Anne Lieberman, director of policy and programs from US non-profit Athlete Ally, which aims to promote equality for LGBTQ people in sport, said that for transgender youth, having transgender athletes at the Olympics is “nothing short of life-saving.”

Veale, from the Professional Association for Transgender Health Aotearoa, agreed: “It feels like this is a dream of these young people that we can either nurture or we can shatter.”

What needs to change

More than a decade after her Olympic examination, Worley says she has chosen to put the past behind her and is working with the IOC to improve the situation for other athletes.

“I’ve gotten to a place where I have to forgive,” she said. “Because by forgiving … it takes my power back.”

In a statement to CNN, the IOC said it was developing new guidance to ensure athletes can engage in safe and fair competition, regardless of their gender identity.

“Overall, the discussions, so far, have confirmed the considerable tension between the notions of fairness and inclusion, and the desire and need to protect the women’s category,” the IOC said.

Worley thinks there are still issues with the rules around transgender women participating in the Olympics — and she doesn’t think there is enough support in place, both from the organization and the public.

“I’m more concerned about (Hubbard’s) health and wellbeing and to ensure her success and so on because I know the infrastructure isn’t there to support her,” she said.

Harper says she has been told by women that it’s unfair for her to compete.

“It’s hard to face that sort of animosity,” she said. “It hasn’t really changed that much … I would love to think that things are getting better. But I’m not sure I see a lot of evidence of that.”

Harper believes there should be a two-level approach.

For athletes playing at a non-elite level, she thinks they should be allowed to compete where they feel most comfortable — if they’re at a level when blood testing doesn’t regularly occur anyway, they shouldn’t be blood tested. At an Olympic level, it is appropriate to have testosterone limits and blood testing for trans athletes to ensure meaningful competition — just in the same way athletes are tested to make sure they aren’t doping, she said.

Storr envisions a world where sport could be made more inclusive of all genders, perhaps by organizing categories on weight or ability.

After all, transgender women aren’t transitioning to get an athletic advantage — they just want to play sport in the category that fits their gender identity. As Hubbard told Radio New Zealand in 2017: “I’m not here to change the world. I just want to be me and do what I do.”