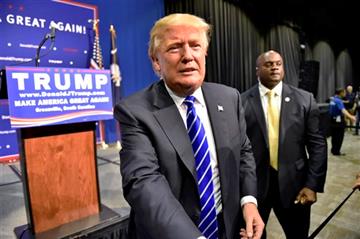 WASHINGTON (AP) – For most of a decade, Bayrock Group LLC partnered with Republican presidential candidate Donald Trump and other developers on luxury real estate deals. For many investors, lenders and condo buyers the Bayrock deals ended in losses – and sometimes allegations of fraud and threats of physical violence.

Throughout, prosecutors and a judge in the U.S. District Court for the Eastern District of New York knew something others didn’t: One of Bayrock’s top executives, Felix Sater, was a convicted ringleader of a $40 million stock fraud scheme tied to the Bonanno and Genovese crime families. Trump’s lawyer said Trump was not aware of Sater’s criminal past until at least 2007, and did not know of allegations of misconduct at Bayrock. Even a Bayrock executive who sued the company said in a federal lawsuit: "There is no evidence Trump took any part in, or knew of, their racketeering."

WHY DIDN’T ANYONE KNOW ABOUT SATER’S GUILTY PLEA?

Sater’s past remained obscured for years because he was cooperating with federal prosecutors. Lawsuits against Bayrock and others allege that the government’s secrecy helped Bayrock attract lenders, business partners, employees and condo buyers who would otherwise have avoided doing business with it. Attorneys for Bayrock and Sater deny any misconduct occurred at Bayrock.

The secrecy surrounding Sater lasted from the time of his 1998 guilty plea until 2007, when The New York Times described Sater’s association with the stock fraud scheme and his 1993 assault conviction for stabbing a man in the face with a broken margarita glass.

Prosecutors said publicly revealing Sater’s role might endanger him or damage his value as an informant. His cooperation formally ended at his 2009 sentencing, and details of his case were not publicly available in court documents until 2012

WHAT DID TRUMP DO AFTER SATER’S CRIMINAL PAST WAS REVEALED?

Trump tapped Sater to scout real estate deals in 2010, after the broad outlines of his past became public. Trump said he, too, was in the dark about Sater’s criminal history during the years the Trump Organization and Bayrock collaborated on projects, including the Trump SoHo in New York, a development in Fort Lauderdale and failed Trump-branded projects in Phoenix and Denver. Trump licensed his name in the deals and received an ownership stake in the projects – as much as 18 percent in the case of Trump SoHo, a joint venture between Bayrock and New York real estate firm The Sapir Group.

Sater said he was forced to leave Bayrock after The New York Times revealed his criminal background.

"I had to leave my company, the company that I built with my own two hands. Otherwise the banks would have said there’s a criminal involved," Sater said at his sentencing, according to a transcript of court proceedings. Sater received no jail time and was ordered to pay a $25,000 fine.

WHAT WAS HAPPENING INSIDE SATER’S COMPANY WHEN IT WORKED WITH TRUMP?

A 2007 lawsuit against Sater, Bayrock and others by a company owned by Ernest Mennes, an investor in a planned Trump development in Phoenix, alleged that Bayrock skimmed money from the project and that Sater threatened to amputate Mennes’s legs and leave his body in a car trunk. Bayrock settled the case, filed in U.S. District Court in Arizona, and after initially being available on the public docket it was sealed. The AP obtained a copy of the complaint. Mennes told the AP he wishes Sater well.

Another lawsuit, filed in U.S. District Court in New York against Bayrock, Sater and others in 2010 by Bayrock’s former director of finance, Jody Kriss, and another Bayrock employee, alleged that Bayrock was "substantially and covertly mob-owned and operated" and went to great lengths to hide Sater’s stake in the firm.

Parts of the lawsuit were struck by the court following a dispute about whether internal Bayrock emails were improperly obtained. Bayrock attorney Walter Saurack denied that Bayrock had misled anyone about Sater’s past or role in the company, and called the allegations of misconduct false.

A newly filed version of the lawsuit said Bayrock was linked to the Mafia and sought to hide Sater’s role. Bayrock has not yet filed a response to that complaint.

This version corrects the title for Jody Kriss to Bayrock’s former director of finance.