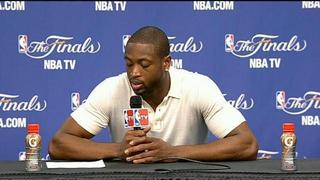 MIAMI (AP) — Dwyane Wade's knee problems were more troublesome during the playoffs than he ever acknowledged.

In an interview with The Associated Press, Wade revealed Saturday that his right knee pained him so much that he contemplated asking to play limited minutes in Game 7 of the Eastern Conference finals, and that his left knee was drained and required about eight hours of game-day therapy just so he could play in Game 7 of the NBA Finals.

"I went through a lot," said Wade, who's now a three-time NBA champion. "But I'm at peace now."

Wade also received platelet-rich plasma therapy late in the regular season to combat three bone bruises around his right knee, which was his biggest source of frustration and pain during the playoffs. Wade said two of the bruises healed, but a third — directly under the kneecap — remained a big problem, especially since that area was also affected by tendinitis.

Wade underwent an MRI to rule out additional problems during the East finals against Indiana, and said he was driving into a meeting with Heat coach Erik Spoelstra before Game 7 of that series — not long after saying in the immediate aftermath of the Game 6 loss to the Pacers that he needed the ball more — to tell him that he felt he should only play short minutes because his ineffectiveness was hurting the team.

Spoelstra had other ideas, and Wade decided to scrap his plan.

"I felt like if I was going to be playing the way I was playing, and hurting the way I was hurting, I wasn't going to be able to help us move on to the next round," Wade said. "I was going to say play me short minutes only, and give Mike Miller and guys other opportunities. But I came into the meeting, and all Spo was about was giving me more opportunities and getting me ways to be more successful. So I was like, `Well, changed my mind."'

Following the MRI that was done late in the Indiana series, Wade said the team's athletic trainers amended his treatment plan slightly, and he started seeing immediate improvement. He scored 21 points in the East-clincher against the Pacers, then scored a total of 57 points — by far his best two-game stretch of the playoffs — in Games 4 and 5 of the NBA Finals against the San Antonio Spurs.

But early in Game 6 of the title series, Wade's collided with the Spurs' Manu Ginobili. Before long, Wade's surgically repaired left knee, which kept him out of last summer's London Olympics, had swollen up "like a coconut."

He needed treatment during the game, even missing the start of the second half. Wade got a large amount of fluid drained from the knee on Wednesday, then got more than three hours of treatment at the arena Thursday morning and about 4 1/2 more hours of work done in the afternoon, going almost all the way up to the moment the Heat took the floor to warm up for Game 7.

"We know what he was dealing with," Spoelstra said after Game 7. "Really, he should be commended for being out there and doing whatever it takes, putting himself out there for criticism, possible criticism, because he wasn't 100 percent. And he just helped us win. That was the bottom line. It was a selfless effort for two months. And some players probably wouldn't have played."

Wade said the right knee pain was at times the second-worst thing he's dealt with, injury-wise, in his 10-year career, behind only the shoulder he dislocated in 2007 in an awkward collision with then-Houston forward and current Heat teammate Shane Battier.

The late-season knee problems took some shine off a year where Wade averaged 21.2 points, 5.0 rebounds and 5.1 assists on a career-best 52 percent shooting, yet still had his skills often questioned. Only Heat teammate LeBron James, Oklahoma City's Russell Westbrook and the Los Angeles Lakers' Kobe Bryant averaged as much in all three of those categories this season as Wade did.

"The toughest part of it is, you work all season to get healthy coming off of knee surgery," Wade said. "And when I finally got the way, everybody saw in my play that I was playing great, some of the best basketball in the role I have on this team. Then I get the bone bruises, and something I worked hard for was getting taken away, and I dealt with it for three months. It was disappointing, frustrating. It hurt. I was able to mask it some nights. Some nights, not."

In the end, it was all worthwhile. Wade will soon be getting his third ring — "3 for No. 3," as the shirts many of his friends wore amid the Heat celebration pointed out.

"Selfishly, I'm going to say we won this one for me," Wade said. "Because of the way my career has gone and the things I've dealt with personally, I wanted this third one. In my mind, it validates the player I've become in this league. When you change your position, going from being talked about as one of the three best players in this game to people questioning your ability, I needed this one to validate that what I did was the right thing. I can be at peace with anything going forward."