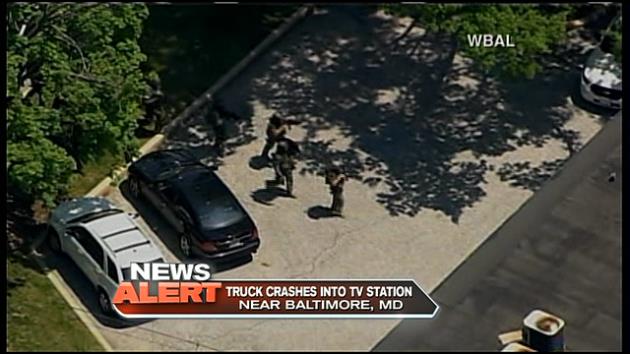 Baltimore County law enforcement officials said the 29-year-old man was taken into custody at about 4 p.m. after spending nearly five hours barricaded inside the WMAR-TV station in Towson, watching journalists deliver live reports from just outside the building.

No one, including the suspect, was injured, according to Baltimore County Police. The man’s name was not immediately released.

The suspect was taken to a hospital where he will receive medical treatment before facing possible charges, according to Baltimore County Executive Kevin Kamenetz, adding that the suspect was “speaking in tongues” while inside the station.

Baltimore County Police Chief James Johnson said the man was “ranting and raving,” and was “incoherent.”

“From the beginning it was clear we were dealing with an emotionally disturbed subject,” Johnson said.

The man was holding a golf club when he was arrested, Johnson said. Several sheaths for machetes were also found inside the building, though Johnson indicated they were likely in the vehicle when the man stole it.

Authorities said they were careful about releasing information as the incident played out Tuesday afternoon because they knew the suspect was watching the news. It turns out police were watching him too, though they did not explain how.

“He was watching different channels, watching you report this story,” Johnson told reporters. “We could view him watching TV.”

The commotion began at approximately 11:45 a.m., when police received a pair of 911 calls just minutes apart. The first call described a man screaming and banging against the gates of the station, demanding to be let in. The second reported he’d driven a massive landscaping truck into the lobby.

Michael Marion, WMAR-TV’s head of commercial production, was in his office off the station’s lobby when he heard someone rattling violently against the security door. The man demanded to be let in, claiming “I am God, I am God,” Marion said. But the security guard refused to admit him.

“I heard a series of crashes,” Marion said. “The next thing, I looked in the lobby, and the only thing between truck and the lobby was the final door. I heard one final crash. I looked through the door, and by then the truck was in the lobby.”

WMAR-TV anchor Jamie Costello said one of his colleagues saw the man jump out of the vehicle and run up the stairs. Police said the suspect was apprehended on the second floor, which includes the general manager’s office, human resources, production and editing facilities. They said they used a flash bomb and a police dog to help arrest him.

A single employee remained in the station’s basement throughout the ordeal, updating police. During WMAR-TV’s evening newscast, Nic Hall said he didn’t realize what had happened until he was contacted by a co-worker who was offsite.

“I was in the basement 3 1/2 hours talking with police, letting them know the lay of the land,” Hall said.

Hall said he’d only worked at the station for two weeks.

“It was interesting. I’ll be here tomorrow.”