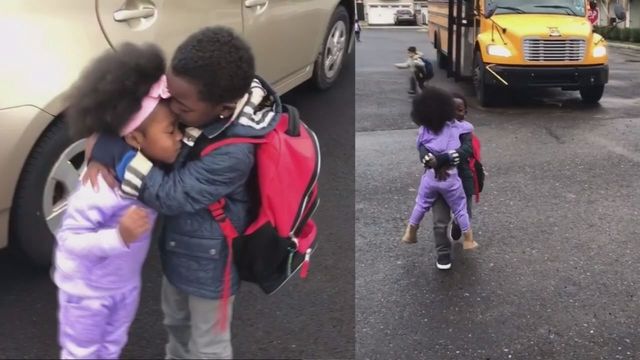 YARDLEY, Pa. (WSVN) — A brother and sister are melting hearts around the world after their parents shared video of their amazing bond.

Big brother Tariq Jr., 5, and his little sister Ava, 3, say they are each other’s favorite people.

Their mom Verlonda Jackson told Fox 5 her children were each other’s first friends and even attended the same day care. But all that time together meant they started to bicker, just like most siblings.

That all changed when Tariq Jr. started Kindergarten.

With the pair now separated, their mom said the distance made their hearts grow fonder.

She captured what she says is an everyday occurrence: little Ava waits at the school bus stop for her brother, excitedly greeting him with an enthusiastic hug. The video has quickly gone viral, garnering tens of thousands of views.

I consider myself to be a fairly tolerant parent. I don’t mind spoiling. If my kids don’t want veggies on their plate at dinner I don’t force them to eat it. And I don’t limit their television viewing all that much as long as they read just as many books. There are a handful of things, however, that can tip me over the edge into that dangerous place of rage, sadness, and self-doubt. Not listening is a big one. Whining is another. But nothing frustrates me more than when my kids fight with each other. They fight over whose turn it is with the iPad, who has more time with the iPad, and who is better at whatever game they are currently playing on the iPad. They fight over who got the bigger piece of cake, more frosting, the better plate. They call each other names and dole out insults like “you’re a butt” and “no YOU’RE a butt.” Sometimes the fighting makes me want to scream or cry, or both. I wonder what I’m doing wrong as a parent, and I lament the fact that two of the people I love the most don’t seem to like each other at times. There are days when it seems like the vast majority of their interactions are acrimonious, hostile, and exasperating. But every afternoon at 4:04pm when my son gets off the school bus from kindergarten, this happens…….they greet each other with hugs, kisses, and walk home arm and arm saying things like, “Your my favorite person.” “Thanks. Your my favorite person, too.” As a parent that’s the best I can hope for. That my babies will fight and forgive. That they will practice what it means to be a human with each other. That they will learn when to stand their ground and when to let something go. That they will learn to be siblings, maybe even favorites. ❤️ #Love

Jackson says she decided to capture the video to show her husband, not realizing how the sweet greeting would resonate with so many.

“The excitement and love they felt in that defining moment, after Jr. stepped off the school bus, and they laid eyes on one another was so pure,” Jackson told Fox 5.