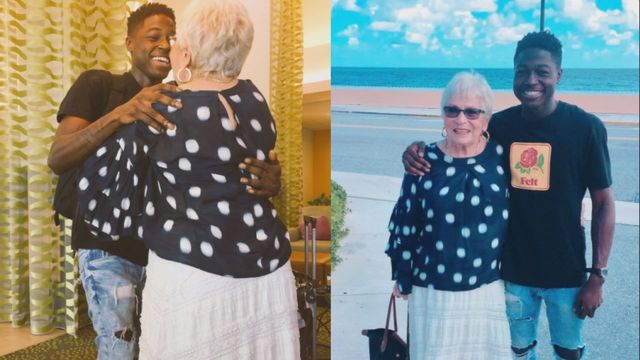 (WSVN) - A young man traveled over 1,000 miles to meet the elderly woman he became friends with through an online game.

Fox 5 reports that 22-year-old Spencer Sleyon, who lives in New York, flew down to West Palm Beach to meet 81-year-old Rosalind Guttman. The two became long-distance buddies while playing the online game Words With Friends, where the octogenarian caught his attention by playing the word “phat.”

The aspiring rapper posted photos of their meeting on Twitter, writing, “We played 300+ games together and she actually ended up becoming a good friend of mine.”

so last summer i randomly met this 80 y/o woman on words with friends. we played 300+ games together and she actually ended up becoming a good friend of mine. today i got to go to florida and meet her in person💜 pic.twitter.com/VXDbNS4eUo

The photos quickly went viral, with over a million likes and 240,000 retweets in just three days.

The meeting became possible thanks to Amy Butler, a pastor at the Riverside Church in Manhattan. Butler decided to make the trip happen after hearing Sleyon tell her daughter about his virtual friendship.

“One night, a few months ago, they started a conversation about who their best friends were, and Spencer said, ‘My best friend is an 80-year-old white woman who lives in a retirement community in Florida,’ and I said, ‘What?,’” the Rev. Butler told The Root.

She’s 86 & lives in a retirement community in Florida. He’s 22 and lives in Harlem. They met online playing #wordswithfriends. Tomorrow they’ll meet in person. I get to be there. #relationshipschangeus pic.twitter.com/xNJjK3ga6H

“She came to me weeks later and asked me how would I be interested in going to Florida for a day to meet her,” Sleyon said.

The two spent the day together, having lunch at her favorite restaurant and taking a tour of her retirement community.

Sleyon said he hopes his story brings “only positivity” to those who hear it.

“Whatever people want to take from this story and however it makes them feel, I’m just glad and Rosalind and I can bring that to people,” he said.