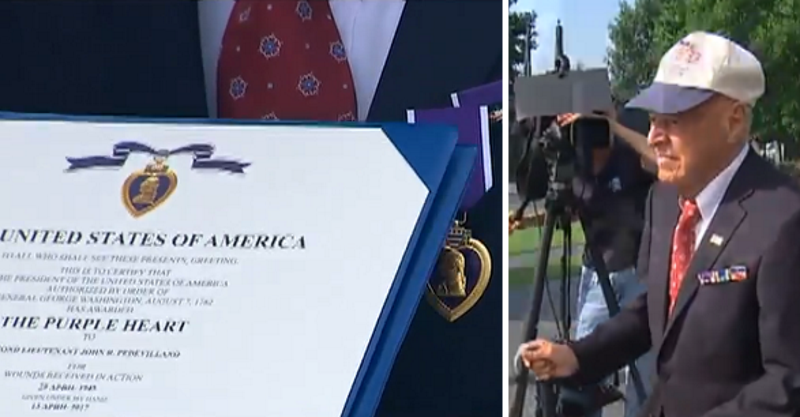 (WSVN) - A World War II veteran on Friday received a long-overdue Purple Heart for his service at a special ceremony at the Air Force Memorial in Arlington, Virginia.

Just shy of his 95th birthday, 2nd Lt. John Pedevillano received his medal seven decades after his service in Europe.

Pedevillano’s plane was shot down over Nazi Germany in April of 1944, and he was taken as a prisoner of war in Zagan, Poland, until the Allies rescued him in 1945.

Fox News reports that, when he returned home, he was too humble to demand his due reward for his service. But the veteran’s daughter found his military records in 2016 and worked with Sen. Barbara Mikulski (D-Md.) and others in Congress to have her father recognized.

“All I can say is I love this country,” the war hero said. “The greatest things of my life was this country and my wife.”

Pedevillano told WRC-TV that he’s looking forward to the day he can be reunited and buried with his wife, who is buried at Arlington National Cemetery.