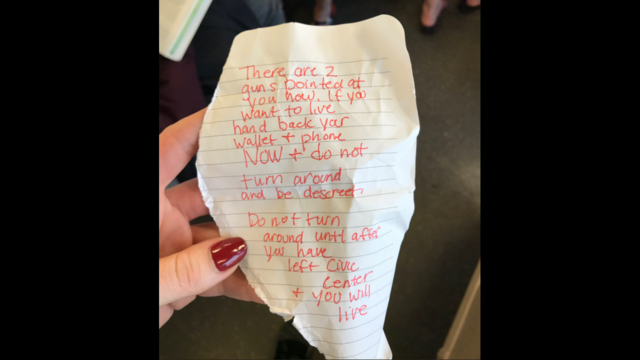 SAN FRANCISCO (WSVN) — A California woman scared off a would-be mugger on a train after someone handed her a note, saying there were guns pointed at her.

According to Fox News, Julie Dragland said the mugger was behind her on a BART train Saturday in San Francisco, handing her a note that told her to give up her belongings.

“There are 2 guns pointed at you now,” the note said. “If you want to live hand back your wallet + phone NOW + do not turn around and be descreet (sp). Do not turn around until after you have left civic center + you will live.”

Rather than following the note’s instructions, Dragland instead faked a seizure, getting the attention of nearby passengers which forced the mugger the flee.

“When I read the note, I started freaking out,” she told SF Gate in an interview. She said she also tried to secretly mouth the words “help me” to a man standing nearby, though with no luck.

“I did not want to give up my stuff, but I had no idea who was behind me.”

That’s when she decided to fake having a seizure to scare off the robber, an idea she says came from an episode of “Law & Order.”

“I probably looked very ridiculous,” she said. “I slumped sideways and started shaking and crying. I closed my eyes and increased the vigor so people would pay attention.”

A couple quickly came to her aid, and she handed them the threatening note.

BART Police reviewed surveillance video from the train, saying the footage corroborates Dragland’s report. The video shows the suspect, a white woman with reddish-blonde hair, sitting behind Dragland. Deputy Chief Lance Haight told KTVU the video appears to show the note in question, but said there is no indication the suspect actually had any weapons.