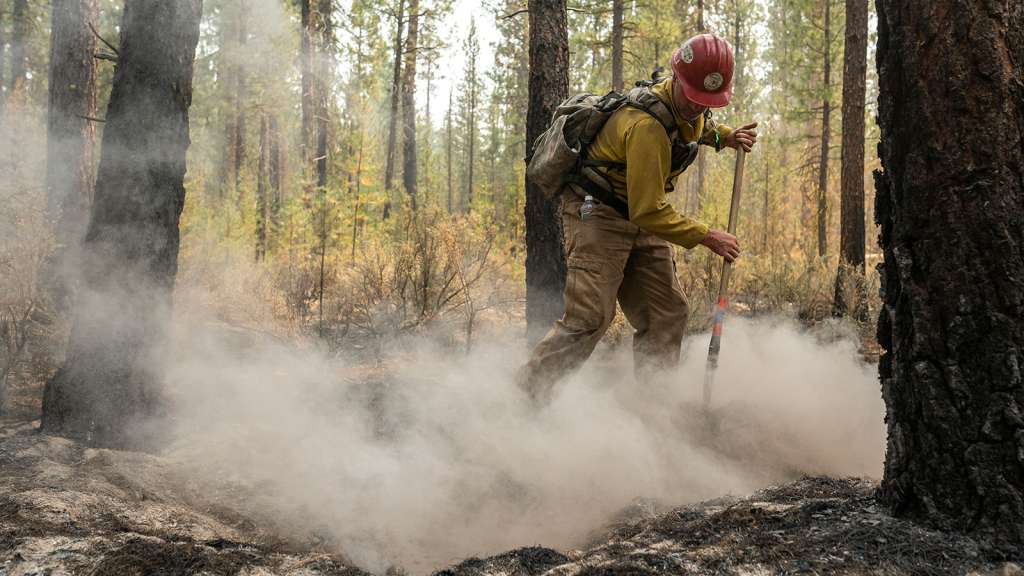 Firefighter Garrett Suza, with the Chiloquin Forest Service, mops up a hot spot on the North East side of the Bootleg Fire, Wednesday, July 14, 2021, near Sprague River, Ore. (AP Photo/Nathan Howard)

(CNN) — The Oregon National Guard was deployed Wednesday to help fight the massive Bootleg Fire — the country’s largest wildfire — which has already charred more than 220,000 acres.

The fire, which has scorched 227,234 acres in the Fremont-Winema National Forest in the state’s southwestern area, began July 6 and was 7% contained as of Thursday.

The state’s National Guard was called on to help with road closures and traffic control for areas affected by the fire, said Liz Merah, press secretary for Oregon Gov. Kate Brown.

About 1 million acres have been scorched in 71 large fires or complexes across 12 states, the National Interagency Fire Center (NIFC) said Thursday on its website.

With wildfires burning across much of the West, the nation is at its highest level of fire preparedness, according to the NIFC. This is the earliest move to Preparedness Level 5 — also known as PL 5 — in the past decade, the agency said.

Temperatures across the region are expected to remain above normal while storms are on horizon — and weather conditions stand to exacerbate an already dire situation as huge areas of land go up in flames.

In Washington, Gov. Jay Inslee declared a drought emergency for the majority of the state, noting that the negative impact of climate change cannot be ignored any longer.

“This is not political hyperbole. It is a scientific consensus that is jarring the life of every Washingtonian in some way,” Inslee said.

The emergency declaration includes all of Washington except for the Seattle, Tacoma and Everett metro regions, which the governor said are currently believed to have enough water for the time being.

Oregon and Washington moved into the highest level of wildfire preparedness Wednesday as the Bootleg Fire continued to tear through hundreds of thousands of acres.

Communities around Summer Lake and the town of Paisley in southern Oregon were being evacuated Thursday due to “increased fire activity” around the blaze.

In Chelan County, Washington, 1,500 homes are under evacuation notifications because of the fast-moving Red Apple Fire, which has burned at least 11,000 acres, according to the sheriff’s office and fire officials.

In Northern California, firefighters are battling the Dixie Fire, leading officials to issue evacuation warnings. The fire sparked Tuesday in Butte County, burning through nearly 2,250 acres with no containment, according to CAL Fire. The same area was devastated by the 2018 Camp Fire — the deadliest and most destructive fire in state history.

Climate experts have said the dozens of wildfires burning amid the West’s severe drought and heat waves are also induced by the climate crisis.

And wildfires are not only hitting the US. In British Columbia, Canada, the Cariboo Regional District issued an evacuation order Wednesday for 1,074 properties in Flat Lake to Green Lake, according to a news release.

The order applies to approximately 140,775 acres, where people were asked to leave immediately. The latest data shows that at least 310 active fires are raging in the province.

Native American communities in Washington and Oregon are also dealing with ravaging wildfires.

“The fire is burning in our traditional homelands where we have treaty rights to gather, hunt, fish and exercise our traditional rights. It will have a negative effect on our treaty resources,” Gentry said in a phone interview.

There are nearly 5,600 members of the Klamath Tribes and about half of them live in Klamath County, about 70 miles north of the Oregon-California border. The fire has forced some members to evacuate.

“Though I haven’t been able to get to the area since the fire has burned through, I feel devastated, I feel devastated by it. I have hunted the area with my father, brother, grandson, many other elders and tribal members over the years. Just thinking of the loss is difficult for me and many of our people,” Gentry told CNN.

To make matters worse, he said the tribes are concerned about water quality issues caused by the fire.

In northeast Washington, the Chuweah Creek Fire is burning near the Colville Indian Reservation, where tribal leaders say there are not enough resources to keep it under control.

“We’ve had the heat wave that dried out everything out here, with the potential that it could become catastrophic very soon,” Colville Business Council Chairman Andy Joseph Jr. told CNN Wednesday.

Seven homes were destroyed in the last two days, Joseph said. The fire has charred more than 32,000 acres, the NIFC said.

The reservation’s economy is also threatened by the flames.

“Some of the animals had to be put down because of burns,” he said, adding that timber generates the revenue to help keep their government running.