‘We’re tired of living like this’: DACA ruling leads to frustration and devastation for young undocumented immigrants 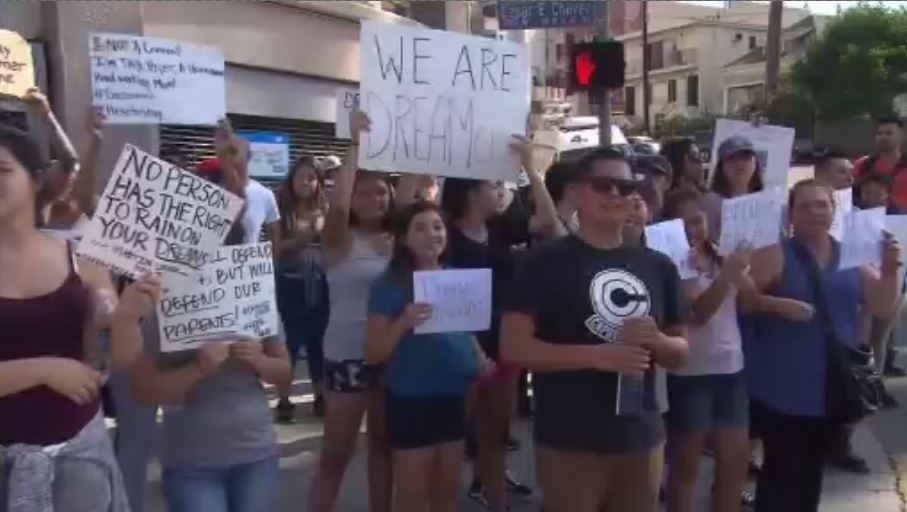 (CNN) — After navigating life in the US for 17 years without legal status, Yazmin Bruno-Valdez was ushered into the Obama-era Deferred Action for Childhood Arrivals program less than a month ago, granting her long-awaited protection from deportation and opening potentially bright new pathways for jobs, scholarships and travel.

The 20-year-old college junior found herself in tears of joy last Monday after getting her drivers’ license in Kansas — marveling at how it felt to drive home, free from the fear that one harmless traffic infraction could lead to an encounter with immigration officials who could eject her from the country.

But that brief sense of freedom and possibility vanished on Friday night when a federal judge in Texas ruled that the 2012 DACA program created by former President Barack Obama was illegal. US District Judge Andrew Hanen, an appointee of Republican President George W. Bush, said DACA recipients can maintain their status for now and may continue to renew it every two years. But the program will cease to exist for the tens of thousands of applicants who were waiting in the DACA pipeline

It was another cruel twist of fate in Bruno-Valdez’s journey, one that has left her awash in fear, guilt and uncertainty. When the ruling came down Friday night, she said she felt as though she had been granted Willy Wonka’s “golden ticket” just before that privilege was snatched away from so many others who she feels deserved it just as much.

“I am so angry that so much of this was based off of luck,” Bruno-Valdez said in an interview Saturday. “I just feel terrible. I feel so much guilt. I feel like I pushed so many people to apply.”

Even though Bruno-Valdez made it into the program before it was ruled illegal, that doesn’t give her much piece of mind. “What if the (DACA) program ends completely and now they have our exact location,” Bruno-Valdez said. “They have our address. They have every bit of information that they can possibly need to deport us on. And what if there is another ruling that just takes away these protections?”

Many of the more than 600,000 DACA recipients are now contemplating those same “what-if” scenarios as they find their lives upended by yet another court ruling. They are angry about the countless promises by members of Congress from both parties who said they would find a permanent legislative solution for a program that was always intended to be temporary.

The shock of the ruling has been heightened by the fact that many DACA recipients believed they were safe when President Joe Biden was elected in 2020 after four years of former President Donald Trump’s hostility and demonization of immigrants. Though Trump tried to end the DACA program in 2017, he was ultimately blocked from doing so by the Supreme Court. But with the court’s more conservative makeup after Trump appointed his third justice last year, it is impossible to predict whether it would do so again.

“For a moment, there was like a sheet of light that shined through the dark times — and it was like, ‘OK, things are really going to get better now,'” said Frida Adame, a 25-year-old DACA recipient from Houston whose sister applied for DACA a few months agoand is now among those who were cut off by the decision Friday night. “But then with this ruling, the light that was going through just dimmed and now it’s dark again. … We have absolutely no idea of what will happen next and that’s scary.”

Adame noted that after she became a DACA recipient in 2015, she was able to take better care of her family members who are undocumented. “All the apartments and places that we’ve ever been in — they’re under my name,” she said. “In a way it was really hard, because I was 19 with a whole family on top of me, on my back.” She worries now about how her sister will make her way and find a good-paying job without documents.

“Maybe 10 years ago it was easy to get a job anywhere without documents. Nowadays they won’t even hire you at a Walmart,” she said. “At this point, we just need Congress to act — and the Democrats to act. … Without help from Congress, it’s like we’re not even in this country. It’s like they are trying to erase us.”

Many of the so-called Dreamers hope that Democrats, who have the tie-breaking vote in the evenly divided Senate, will create permanent protections for them and certain other groups of immigrants through the budget process known as reconciliation — which would only need the support of 50 Democrats. But there are many hurdles ahead in that process, including whether the Senate parliamentarian would consider the immigration provisions to be germane to that special budget process.

While some Republican senators have expressed interest in helping DACA recipients, it is unclear whether Hanen’s ruling will create more bipartisan support for the American Dream and Promise Act of 2021 in the 50-50 Senate at a time when the two parties are warring over the dramatic influx in migrants across the Southern Border.

The bill — which would create a pathway to citizenship for young undocumented immigrants who came to this country as children, as well as Temporary Protected Status recipients and others — passed the US House in March with the support of nine Republicans.

Biden, who took some intermediary steps to strengthen the DACA program when he entered the White House, called Hanen’s ruling “deeply disappointing” Saturday and said the US Department of Justice would appeal the decision. But the legal prospects look challenging as the case works its way up to the staunchly conservative 5th US Circuit Court of Appeals.

‘My entire life is here’

For the tens of thousands of first-time applicants who began applying to the program after a federal judge in New York ruled last December that the federal government must accept new DACA applications, the ruling is devastating.

Valeria Mata, a 17-year-old DACA applicant from Illinois, said she waited to apply until after Trump was out of office because his policies “made us almost want to go into hiding.” Biden’s election, she said, “was like a sliver of hope.”

But Hanen’s ruling crushed her.

“I was really kind of basing my whole future on this opportunity,” Mata said after finishing her Saturday night shift at a perfume store. “I had so many different plans and things I wanted to do that seem so much further away now.”

An aspiring psychologist who hopes to work in the field of mental health helping erase the stigma among people of color, Mata has watched with frustration as her younger brother, who’s a citizen, has entered the workforce, immediately earning higher wages and better benefits while she is forced to settle for what employers will give her.

“I know that Biden is going to continue fighting and that we will continue fighting for DACA,” Mata said. “But there’s always that fear of being deported. That’s really scary because my entire life is here. I’ve only met like 10% of the people that are related to me in Mexico. So it’s pretty scary to think that I would have to get used to a completely different environment. I’ve been here since I was two years old, so I don’t know anything other than life in the US.”

After Hanen’s ruling, many DACA recipients are unsure of how long the program will exist or when the next court ruling could reshape their fates. Some say the Biden administration should have moved more quickly to address the backlog of applications — because the delay in processing the applications of so many in the DACA pipeline now means those young people have missed their chance to get DACA protections.

Immigration advocates note that one portion of Hanen’s ruling underscores how tenuous the stay he granted is when it comes to protecting current DACA recipients. In his order of permanent injunction, Hanen wrote that his stay hinged on the government’s willingness to address his concerns about the program.

“If the Government fails to take the appropriate steps to remedy the shortfalls in DACA within a reasonable time given the complexities inherent in such a process, the Court will reconsider its decision to stay portions of the relief that it has granted,” the judge wrote.

Ju Hong, a DACA recipient who recently lost his job at the Alameda County Public Health Department as well as his health insurance after his work permits expired due to the backlog in processing DACA renewals, said the language of the ruling underscored the uncertainty so many are feeling. Though his status has now been renewed, he worries for those who have seen their plans shattered.

“We need the Biden administration and the Democratic Congress to come through on their promises to deliver citizenship for all, for everyone, so we don’t have to be in this limbo every two years,” Hong said in an interview Sunday.

“We’re tired of living like this — with this fear, anxiety and stress. I cannot wait any more. Enough is enough.”