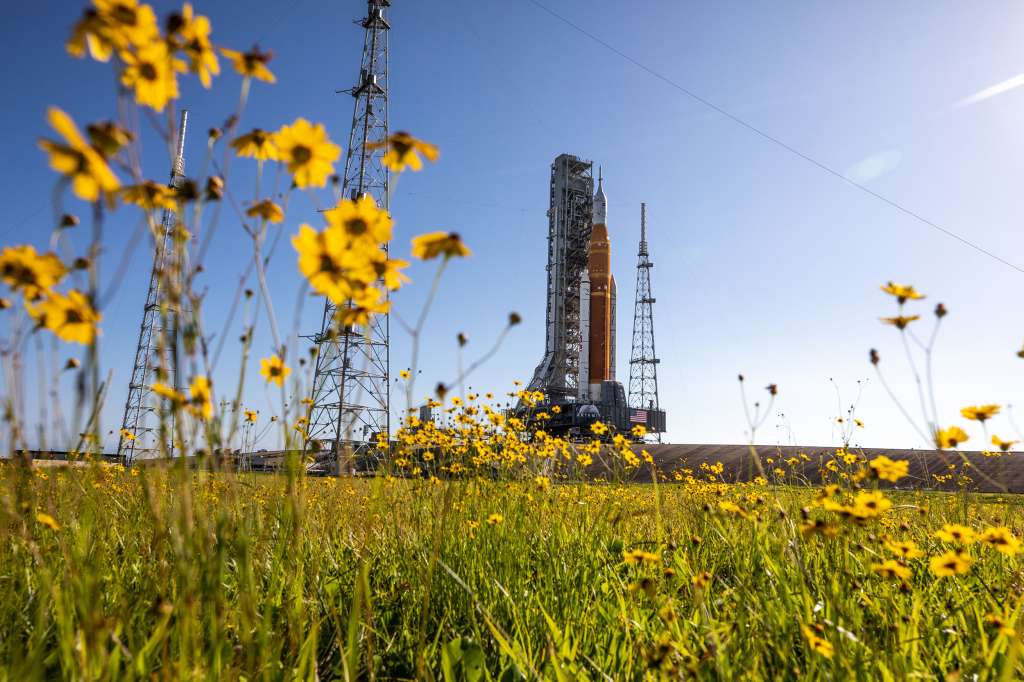 With wildflowers surrounding the view, NASA’s Artemis I Moon rocket – carried atop the crawler-transporter 2 – arrives at Launch Pad 39B at the agency’s Kennedy Space Center in Florida on June 6, 2022. The rocket rolled out of the Vehicle Assembly Building in the early morning hours to travel the 4.2 miles to the launch pad for NASA’s next wet dress rehearsal attempt ahead of the Artemis I launch. The first in an increasingly complex series of missions, Artemis I will test the Space Launch System rocket and Orion spacecraft as an integrated system prior to crewed flights to the Moon. Through Artemis, NASA will land the first woman and first person of color on the lunar surface, paving the way for a long-term lunar presence and using the Moon as a steppingstone before venturing to Mars.

(CNN) — The Artemis I mega moon rocket is ready to fuel up.

The fourth attempt of a final prelaunch test started on Saturday, with fueling of the rocket expected to begin Monday morning.

The crucial test, known as the wet dress rehearsal, simulates every stage of launch without the rocket leaving the launchpad at Kennedy Space Center in Florida.

The results of the wet dress rehearsal will determine when the uncrewed Artemis I will launch on a mission that goes beyond the moon and returns to Earth. This mission will kick off NASA’s Artemis program, which is expected to return humans to the moon and land the first woman and first person of color on the lunar surface by 2025.

Three previous attempts at the wet dress rehearsal in April were unsuccessful, concluding before the rocket could be fully loaded with propellant due to various leaks. These have since been corrected, NASA says.

The NASA team rolled the 322-foot-tall (98-meter-tall) Artemis I rocket stack, including the Space Launch System and Orion spacecraft, back to the launchpad at Kennedy Space Center in Florida on June 6.

Wet dress rehearsal: What to expect
The wet dress rehearsal began at 5 p.m. ET Saturday with a “call to stations” — when all of the teams associated with the mission arrive at their consoles and report they’re ready for the test to begin and kick off a two-day countdown.

Preparations over the weekend will set up the Artemis team to start loading propellant into the rocket’s core and upper stages.

There is currently a live view of the rocket on NASA’s website, with intermittent commentary.

Tanking was on hold Monday morning because of an issue identified with the backup supply of gaseous nitrogen. The launch team replaced the valve causing the issue. In order to make sure the backup supply is functioning as expected, it has been swapped in as the primary supply for today’s test.

The hold lifted at 9:28 a.m. ET. Liquid oxygen and liquid hydrogen, cooled to minus 297 degrees Fahrenheit (minus 182 degrees Celsius), will fill the tanks. Venting may be visible as the tanks fill.

A two-hour test window will begin later, with the Artemis team targeting the first countdown at 4:38 p.m. ET. due to the tanking delay.

First, team members will go through a countdown to 33 seconds before launch, then stop the cycle. The clock will be reset; then the countdown will resume again and run until about 10 seconds before a launch would occur.

“During the test, the team may hold during the countdown as necessary to verify conditions before resuming the countdown, or extend beyond the test window, if needed and resources allow,” according to an update on NASA’s website.

“We hope to finish them off this time around and get through the cryogenic loading operations along with terminal count,” she said. “Our team is ready to go, and we’re looking forward to getting back to this test.”

The mission team is looking at possible launch windows for sending Artemis I on its journey to the moon in late summer: August 23 to August 29, September 2 to September 6 and beyond.

Once the Artemis rocket stack completes its wet dress rehearsal, it will roll back into the space center’s Vehicle Assembly Building to wait for launch day.

There is a long history behind the arduous testing of new systems before a launch, and the Artemis team faces similar experiences to those of the Apollo- and shuttle-era teams, including multiple test attempts and delays.

“There’s not a single person on the team that shies away from the responsibility that we have to manage ourselves and our contractors and to deliver, and deliver means meeting those flight test objectives for (Artemis I), and meeting the objectives of the Artemis I program,” said Jim Free, associate administrator for NASA’s Exploration Systems Development Mission Directorate, during last week’s news conference.