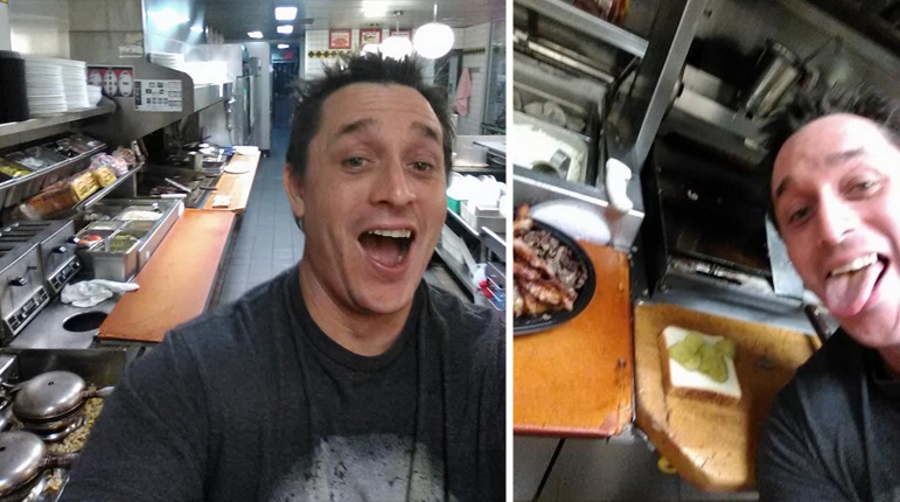 WEST COLUMBIA, SC (WSVN) — He was slightly drunk, very hungry, and he couldn’t sleep, so Alex Bowen walked into an empty Waffle House a block away from home early Thursday morning in search of a meal.

Bowen said the restaurant appeared to be deserted, with no other customers – or employees – inside.

He waited 10 minutes at the register, yet no one appeared, Fox Carolina reports.

“I walked back outside to look for employees,” Bowen said. “No one in sight.”

So he went back into the restaurant, and waited until his hunger took over.

“Walked back in and waited a few more minutes and then it was go time,” Bowen told the station.

He went behind the counter to cook up his own meal, taking selfies along the way.

“I give all the credit to my old friend vodka,” Bowen told WIS-TV. “I wouldn’t normally have done that.”

It was only afterward that he spotted a Waffle House employee sleeping in a corner booth. But by that point, he already had his off-menu creation cooking on the grill.

“Got hot on the grill with a double Texas bacon cheesesteak melt with extra pickles,” Bowen said. “When I was done I cleaned the grill, collected my ill-gotten sandwich and rolled on out.”

Bowen returned to the restaurant later on in the day to pay for his sandwich, taking another selfie with the cashier as proof.

A spokesperson for Waffle House said the sleeping employee was suspended for a week.

“Our local Division Manager has spoken to Alex and apologized. For safety reasons, our customers should never have to go behind the counter. Rather they should get a quality experience delivered by friendly associates. We are reviewing this incident and will take appropriate disciplinary action.”

The statement continued, “In a related note, obviously Alex has some cooking skills, and we’d like to talk to him about a job since we may have something for him.”

ABC News reports that a district manager reached out to Bowen, asking him to become a Waffle House “secret shopper” and thanking him for bringing the matter to their attention.