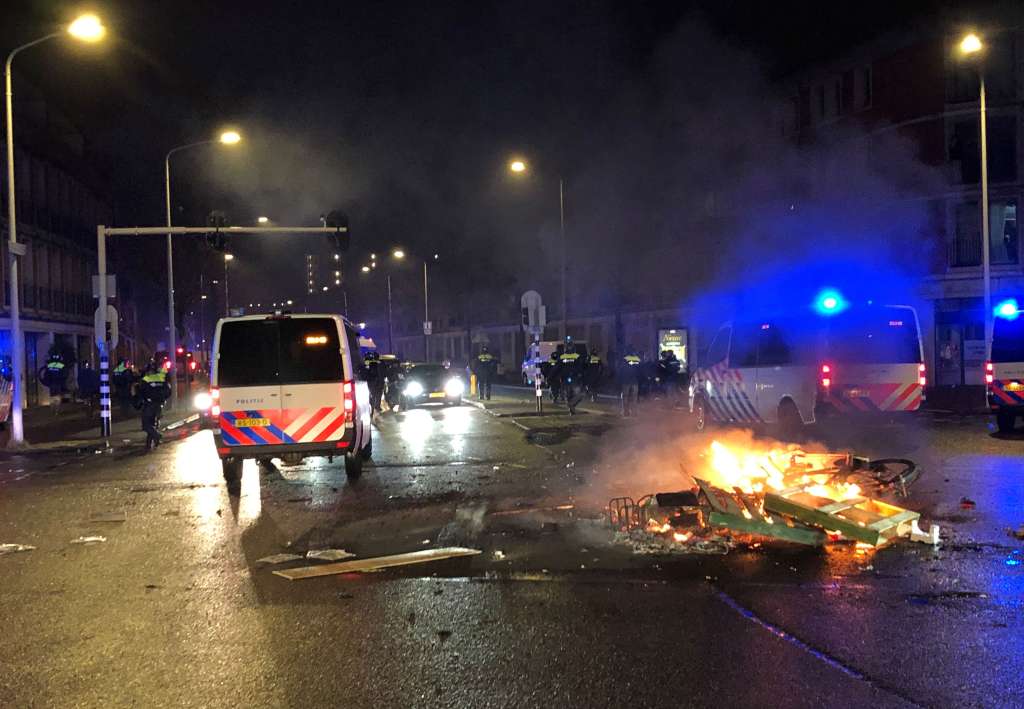 A photo shows a fire in a street of The Hague during a demonstration against the Dutch government's coronavirus measures, on November 20, 2021. - Fresh rioting broke out late November 20 over the Dutch government's coronavirus measures, with rioters pelting police with stones and fireworks as protests turned violent for a second night in the Netherlands. (Photo by Danny KEMP / AFP) (Photo by DANNY KEMP/AFP via Getty Images)

(CNN) — Protests in European countries against new Covid-19 restrictions turned violent over the weekend as cases continue to rise in the continent.

Rioting broke out at The Hague on Saturday over the Dutch government’s new coronavirus measures. Video from the scene shows riot police deploying water cannons and charging groups of demonstrators.

The Netherlands re-entered three weeks of partial lockdown last Saturday and is now planning to ban unvaccinated people from entering some venues.

Five police officers were injured during the clashes at The Hague, with one taken to hospital suffering concussion and two suffering hearing damage from loud fireworks, police said in a statement.

Thousands of protesters attended a largely peaceful march in the capital Amsterdam on Saturday. Dutch public broadcaster, NOS also reported rioting in the town of Urk and cities in southern Limburg province. The protests follow violent clashes on Friday night in the port city of Rotterdam, during which police were forced to fire gunshots to disperse the crowd, and 51 people were arrested.

Elsewhere, an estimated 40,000 people on Saturday crowded the streets of Vienna in the country’s biggest coronavirus-related protest to date. Police tried to de-escalate the protest and when the “mood was about to tip,” they stopped fining those not wearing facemasks, Franz Eigner, Vice President of the Vienna police said during a press conference on Sunday.

Some police officers had “unidentified liquid” sprayed on them, and protesters were trying to blind a helicopter with a laser, Eigner said.

A small number of protesters were “extremely prone to violence,” Austrian Interior Minister Karl Nehammer said during the press conference, which he associated with the “right-wing extremist scene.”

Austria will re-introduce a nationwide partial lockdown on Monday and make coronavirus vaccinations mandatory from February next year.

More than 1,400 police officers were deployed across the country to maintain public order, according to a police statement. Pepper spray was used in one “heated” protest in central Vienna, the police statement added.

France sent dozens of elite police and counter-terrorism officers to its Caribbean island of Guadeloupe Saturday following looting and arson overnight in defiance of an overnight curfew.

The island’s prefect on Friday introduced the stay-at-home order after protests against the vaccine pass spiralled into violence the previous night. The interior ministry said 31 people had been arrested.

Around 15,000 people on Saturday protested in Zagreb against the Croatian government’s coronavirus measures. From Monday, only people with Covid passports can enter government and public buildings in Croatia.