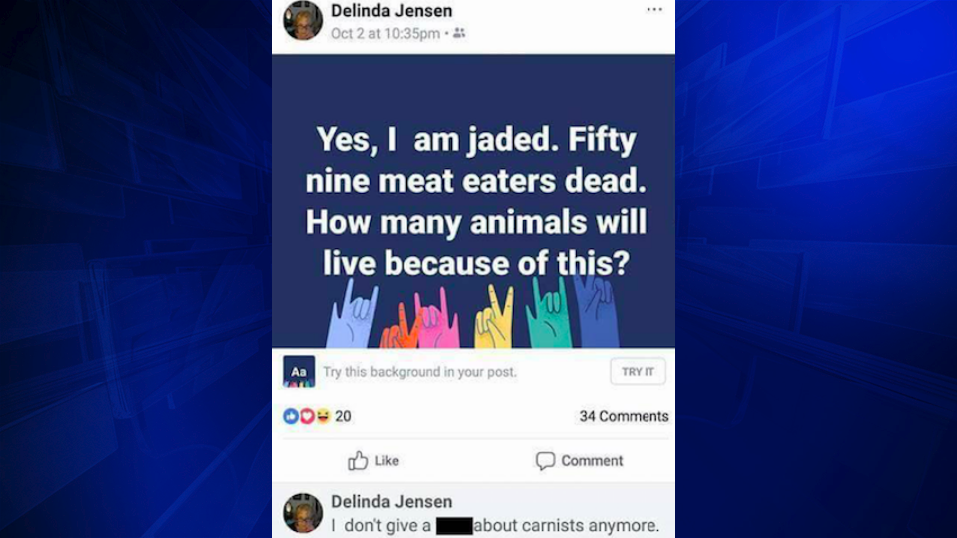 WILKES-BARRE, Pa. (AP) — The owner of a vegan food truck says she regrets a Facebook post in which she appeared to dismiss the deaths of “meat eaters” in the Las Vegas massacre.

Delinda Jensen, 60, of Wilkes-Barre, said she’s received death threats and had to shut down her business after her post Monday night started going viral, sparking intense backlash both online and off.

Jensen wrote: “Yes I am jaded. Fifty nine meat eaters dead. How many animals will live because of this?” In a second comment, she used an expletive to say she didn’t care about “carnists.”

A gunman killed 58 people at a country music concert Sunday night, then killed himself as police closed in.

Jensen, a former adjunct history professor, called her post “a moment of stupidity” and apologized for it in an interview with the Times Leader newspaper in Wilkes-Barre.

“Was it poorly written? Absolutely. Do I regret it? Yes. I am so sorry I wrote that,” she said Thursday. “Meat eaters or not, no one deserves to die like that. I wasn’t celebrating the death of those people.”

Jensen said she became a vegan two years ago and started the Mother Nature Vegan Cuisine food truck with her son. She said she was trying to make the point that she believes animals are tortured and killed unnecessarily for their meat.

Jensen has since deactivated her Facebook account, hidden her food truck and canceled her bookings, and installed a security camera at her home. Her son said people have driven by their home, shouting threats and obscenities, and they have called police several times out of fear for their safety.