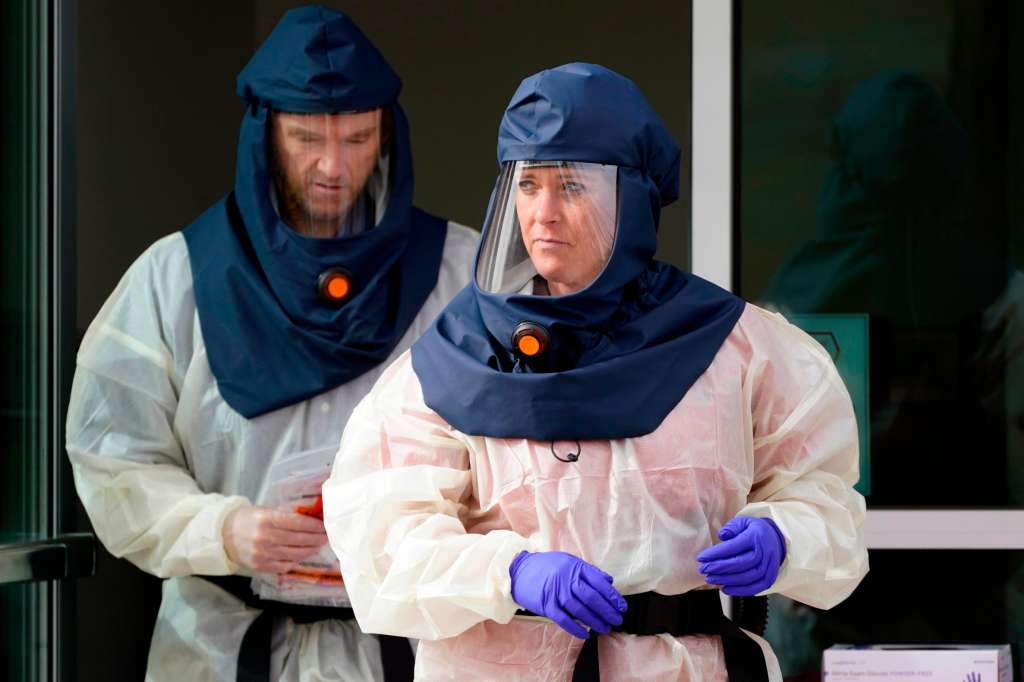 (CNN) — As the US reports its second-highest day of new COVID-19 cases amid the continuing fall surge, a former commissioner of the US Food and Drug Administration says it may be time for a national mask mandate.

In an op-ed for The Wall Street Journal, Dr. Scott Gottlieb wrote the mandate could be “limited and temporary.”

“A mandate can be expressly limited to the next two months,” Gottlieb wrote, adding that it’s easier to wear a mask in the winter than the summer. “The inconvenience would allow the country to preserve health-care capacity and keep more schools and businesses open.”

With deaths expected to rise this winter, policymakers will have to make moves to slow the spread, Gottlieb wrote. There already is no support for reinstating the stay-at-home orders from the spring.

If 95% of Americans wore masks in public, more than 100,000 lives could be saved in the United States through February, according to data released Friday by the Institute for Health Metrics and Evaluation at the University of Washington.

“If people are not wearing masks, then maybe we should be mandating it,” Dr. Anthony Fauci, director of the National Institute of Allergy and Infectious Diseases, told CNN’s Erin Burnett on Friday.

Gottlieb wrote the concern about needing fines to enforce the mandate leading to confrontations with police isn’t necessarily true.

“States should be able to choose how to enforce a mandate, but the goal should be to make masks a social and cultural norm, not a political statement,” he wrote. “Mandating masks has become divisive only because it was framed that way by some politicians and commentators.”

Gottlieb was appointed FDA commissioner by President Trump and served from May 2017 to May 2019. He is now a resident fellow at the American Enterprise Institute, a think tank in Washington, DC.

“We’re at a dangerous tipping point right now,” Gottlieb told Margaret Brennan Sunday on CBS’s “Face the Nation.” “We’re entering what’s going to be the steep slope of the curve, of the epidemic curve.”

Social gatherings and family events moving indoors to avoid the colder weather is largely to blame for the high rates of spread, officials said over the weekend.

In Maryland, the governor said this week family gatherings were the No. 1 source of transmission in the state, followed by house parties. In North Carolina, health officials reported its highest daily case count Friday and said they continue to see clusters “from social and religious gatherings.”

At least 35 states reported more new COVID-19 cases in the last week than the week prior, according to Johns Hopkins data.

“We’re still in the midst of a pandemic and need everyone to take this seriously. Wear a mask. Social distance,” Murphy tweeted.

“This virus has not gone away simply because we are tired of it,” Murphy said.

“Daily increases are now comparable with what we saw in April 2020,” the state health department said in a statement. An additional 29 virus-related deaths were reported Saturday.

“If rates continue like this, we risk overwhelming our hospitals and having many more Michiganders die,” Khaldun said in a statement.

The Texas Division of Emergency Management is establishing an alternate care site in El Paso to expand hospital capacity, according to Gov. Greg Abbott’s office. The facility will open Monday and provide additional beds, equipment and personnel.

Abbott said extra medical staff will be able to help with surge capacity to “reduce the strain on hospitals.”

Fauci: Widespread vaccination not possible until 2021

Fauci said Sunday that experts will know by early December whether a potential coronavirus vaccine is safe and effective, but widespread vaccination will probably not be possible until later next year.

“We will know whether a vaccine is safe and effective by the end of November, beginning of December,” he told the BBC. “The amount of doses that will be available in December will not certainly be enough to vaccinate everybody — you’ll have to wait several months into 2021.”

Speaking to the BBC’s Andrew Marr show, Fauci added that the vaccination of a “substantial proportion of the population” such that there can be a “significant impact on the dynamics of the outbreak” would likely not be possible until the second or third quarter of 2021.

“What I do foresee is that with a successful vaccine and the continuation of some form of public health measures, as we go and progress through the months of 2021, getting towards the third and fourth quarter, we will see a considerable approach towards some form of normality,” Fauci told Marr.

Gottlieb also pointed out that even if a vaccine becomes available this year and goes to the first group of patients, likely the elderly and health care workers, they won’t have protective immunity until some point in 2021.

“This vaccine is not going to affect the contours of what we’re going to go through, which is going to play out in the next two or three months,” he said.

National Institutes of Health Director Dr. Francis Collins said Friday that while he’s “cautiously optimistic” about the US having a vaccine authorized by the end of the year, he said it “might not happen and it might take longer.”