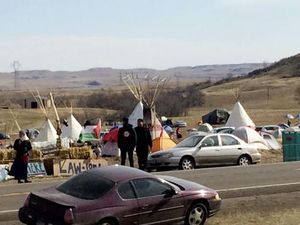 Teepees and numerous tents are set up Monday, Oct. 24, 2016, by Dakota Access oil pipeline protesters in southern North Dakota on property owned by the pipeline company. Protesters say they have treaty rights to the land from the 1800s. (AP Photo/Blake Nicholson)
Associated Press

BILLINGS, Mont. (AP) — U.S. officials are canceling 15 oil and gas leases in an area bordering Glacier National Park that’s considered sacred to the Blackfoot tribes of the U.S. and Canada, according to details of a planned Wednesday announcement obtained in advance by The Associated Press.

The cancellation would preserve the 130,000-acre Badger-Two Medicine area within the Lewis and Clark National Forest, Interior Secretary Sally Jewell said in a statement.

Jewell said it was important to develop oil and gas resources “in the right ways and the right places.”

The move comes amid sometimes-violent protests over an oil pipeline being built near the Standing Rock Sioux Reservation in North Dakota. The Obama administration has been criticized by some American Indians for its handling of that dispute, and federal officials have sought to reduce tensions by saying they would consider re-routing the pipeline.

The Badger-Two Medicine is the site of the creation story for members of Montana’s Blackfeet Nation and the Blackfoot tribes of Canada.

The 15 oil and gas leases were issued in the 1980s and held by Oklahoma-based Devon Energy.

No drilling has occurred. The cancellation was made in cooperation with Devon executives, according to representatives of the Interior Department and the Blackfeet.

In March, federal officials canceled a 6,200-acre lease in the Badger-Two-Medicine that was held by Solenex LLC. The Baton Rouge, Louisiana, company has been seeking to drill for gas in the area for the past several years. It’s challenged the government’s decision in U.S. District Court in Washington, D.C.

Two oil and gas leases remain in the area. Blackfeet Tribal Chairman Harry Barned said in a statement that efforts to cancel those leases would continue.

“Our pursuit to protect the Badger-Two Medicine has lasted more than three decades, and it will continue until all the illegal oil and gas leases are canceled and the area is permanently protected,” Barnes said.